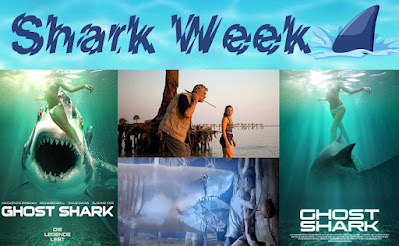 When I set out to watch Ghost Shark I thought to myself two things... one was “This has got to be a fun movie if it has a phantom shark in it, right?” and the other was... “No matter how bad this is, it can’t be as badly a made wasted opportunity as Shark Exorcist, surely?” Well, having now watched it I’d have to say a resounding “no” to the former and a “yeah, pretty much” to the latter. Although, as you can probably figure out from my review of Shark Exorcist (right here), that wouldn’t be hard for any film crew who at least can figure out which direction to point the camera in.

Now Ghost Shark is not as bad a movie as it clearly could have been... the production values are way better than Shark Exorcist although, the special effects in this are still quite cheap looking. However, the first half an hour of the film... which sets up the death of a great white shark at the hands of some fishermen... okay, fisherpeople... that then gets accidentally resurrected in a mystical cave and metes out swift justice to its killers... is just a deadly dull affair. The film does kind of pick up after that, though, when the central bunch of teenagers investigate and try to rid the waters of the Ghost Shark but, by then, it’s a little too late to really save the film.

I’ve said it before and I’ll say it again... how do you mess up a great concept like the deadly, ghostly apparition of a shark by being this dull with the writing. Some of the outrageous deaths (I’ll get to that in a minute) certainly provide a little comedy but the blandness and lack of humour in all the central characters really kinda kills the movie stone dead, in all honesty. These are not the kinds of people... teenagers and adults alike... who I would be choosing to spend any time with and so, obviously, I’m not in a position where I can be rooting for any of them to survive the movie.

Now the premise is way better than the rest of the film and the deaths are comically creative because of that. The titular phantom predator is attracted to water... any body of water... and so a lot of comedy ensues as the various bodies of water it inhabits get sillier and sillier. The film starts to liven up at a pool party when the shark suddenly jumps up and grabs one of the teens, flying away into the heavens. A few seconds later, the kid’s head lands and spikes itself on the neck of a bottle one of the others is drinking from. Then there’s stuff like a plumber being pulled into the pipes he’s working on by the shark, a lawn water slide where a kid gets swallowed and a sexy car wash with bikini clad girls working the hoses as they are all grabbed by the shark, one girl being pulled down into her bucket. In one instance, a guy unintentionally drinks a cup of water he’s just filled from a dispenser and the shark must have been in it because it bursts out of the man’s body, splitting him in two.

Of course, once you know it can attack anything, you know what to expect when any of the main protagonists are put in a place near water. So an accidental fire at a museum starts the sprinklers going and everyone inside is immediately in peril. Or the climax of the movie when the teens are trying to ‘exorcise’ the shark by blowing up a cave (no, I’m not going to bother to explain this hastily cobbled together plot, if you really want to know then watch the movie... but there are better films you could be watching) it suddenly starts raining so, you know, the ghost shark can obviously swim through the rain. Unfortunately, there seems to be no rhyme or reason as to the way the violence manifests. When one of the heroines is pulled down into the depths of her bath by the shark, she is suddenly ejected with a just a minor scratch on her leg (even though we’d just seen the bath fill with blood). No idea what’s going on there.

And, of course, the other thing about these hollow but pleasantly silly deaths is the special effects are not that great and the CGI is not looking good. There’s some deliberately hasty editing involved too... if you know what I mean.

The scoring by someone called Andrew Morgan Smith is somewhat lacking, I felt. Not necessarily in composition but in terms of its presence in the mix. The style of it is strange because he does seem to be homaging John Williams’ score to the first two Jaws movies throughout but, not the actual two note shark motif... more the kind of beach-town Americana which was dotted about those scores. However, maybe it’s a smaller orchestra or, yeah, just too mixed into the background because, like the film itself, it almost but never quite makes it. Everything feels cheap and somewhat lacklustre so, I guess, in a way it’s the perfect score for this kind of film. Sometimes a really great score can absolutely save and re-pace a movie and make it something much more interesting than it initially was. Alas, that’s not the case with Ghost Shark.

And that’s pretty much my final word on the matter. The people behind the camera occasionally have moments where they really try to make something interesting... for example, a shot focusing on the reflection of a character in a lamp... but it never really jells as a whole and I think both shark and bad movie enthusiasts are going to find the film lacking in any real entertainment value. Sad to say. Nice idea, terrible execution. Glad I bought a cheap second hand copy but the changing, lenticular cover on the front of the Blu Ray is much more entertaining than the film itself.