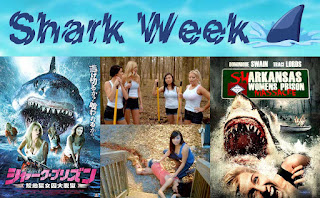 Sharking Up
The Wrong Tree

The only way I found out about Sharkansas Women's Prison Massacre, somehow, is because I bought a limited edition CD soundtrack which was signed by the composer a few years ago. Given the plot, how this never got some kind of cinema release (or any release) in the UK and only a TV/home entertainment release in the US is anybody’s guess and would probably leave most people who are into these kinds of ‘high concept ridiculous trash’ movies scratching their heads in disbelief. I mean, the film is about a group of female inmates who escape from a prison near the swampland of Kansas, being chased and eaten by prehistoric sharks who can swim as fast through land as they can through water. Being as they are not actual sharks which you can experience in the real world, that may push the movie into horror territory for some people although, personally, I think this is more of a fantasy thriller.

The film starts off with two guys fracking in the district which, of course, ruptures the dividing walls between our world and a subterranean ocean, allowing the pre-historic, armoured sharks who, like I said, can swim as easily through the floors of the surrounding forests as they can through water, out into the area. Meanwhile, a crew of prisoners from Arkansas Women’s Prison have been sent out into the forest to clear logs. There is a scene where they take a rest break and seem to end up pouring more water on their t-shirts than they do into their mouths but, strangely enough, this and a similarly tame hot tub scene are the only hints that this may have started out being written as some kind of exploitation film and, while there is plenty of quick gore, there’s absolutely no nudity here... although the various actresses such as Dominique Swain, Christine Nguyen, Cindy Lucas and Amy Holt are ll pretty cute, if that’s your kind of thing. Suddenly though, the girls and their gaolers, including John Callahan playing a very fair and smart Prison Warder, are held up and taken hostage by one of the prisoners’ girlfriends. They are all taken to hide out in a cabin to wait for the law to stop looking for them. Instead, they get sharks.

Meanwhile, Detective Kendra Patterson (played by Traci Lords) and her partner Adam (played by Corey Landis) are searching the area for someone and then get mixed up, from a distance, at the periphery of the action while they try and figure out just what is going on. What’s going on is a group of survivors trying to get to safety and away from the killer land sharks who want their blood. Not much else to tell, I guess.

The film is not, quite, what I was expecting. If this had been attempted in the 1970s I’m sure there would have been some harder and sleazier moments in the film, for sure but, instead, we have a nicely shot movie with occasional kill scenes and some pretty nice cinematography here and there. The various scenes set in an underground grotto are nicely lit and composed, the colours popping in all the right ways. Also, the acting, despite the kind of over the top characters which are always the currency of films like this, is actually pretty good. I’ve not seen Traci Lords in anything before, to my knowledge, but I really did enjoy her performance as the lead and seasoned police detective... even if the lines on the page were occasionally working against her (how many times was she required to speak the line “You do that!”?). She plays it dead pan even when there are some silly jokes, like when her partner asks her if she’s found anything and she starts showing him this vintage coke bottle made of glass she’s found, which will look really good in her minibar at home. Little things like this keep me watching these kinds of movies. Also the big things but, I probably won’t go into those particular assets possessed by a number of the cast in this particular review.

So yeah, it’s a nice film. Some of the blood splashes look a little too much like CGI rather than the often more effective, practical, in-camera variety but mostly it’s one of those films which deal with quick flashes of action and then concentrates more on the bloody aftermath, presumably because that’s a much more budget conscious thing to do. The sharks are actually quite well rendered and burrow through the ground at an alarmingly fast rate, feeling surprisingly dangerous in some sequences. That being said, the trails they make when they burrow through the earth seem to mostly disappear from scene to scene, which was quite puzzling, I thought.

So, yeah, this is not as tacky or inappropriate to good taste as the awesome title of Sharkansas Women’s Prison Massacre had raised my expectations to, for sure, but it does have a certain, almost 1980s glamour charm to it and I certainly didn’t get bored during the 84 minute running time. Possibly one of the least offensive pseudo-exploitation films I’ve seen but I still enjoyed it. Not sure I could recommend it as something to seek out but it’s definitely not one to avoid, for sure. Maybe give it a go sometime.