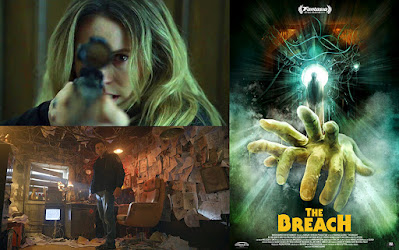 Okay, so The Breach was my first ‘in person’ screening back at FrightFest, since the start of the Covid pandemic. This one sounded really intriguing and, truth be told, I did find it to be pretty good up until a certain point in the story... and I’ll get to the negatives in a minute.

The film starts off very strongly with an opening scene following the progress of a canoe which washes up by the side of a river. A bunch of people relaxing in the sun go to check it out and then we see them all run screaming from it, before the picture freezes and shrinks down into the centre of the frame shaped as the words, The Breach (and more on that stylistic flourish a little later). Turns out there’s a mutilated body in the canoe which has been shredded pretty good, has six fingers on one hand and has all the bones vanished (rather than removed). The backpack with the body identifies it as a scientist set up in a house downstream in the wilderness. So the police guy Hawkins (played by Allan Hawco), his ex-girlfriend Meg (played by Emily Alatalo) who is an expert on the local area and her previous ex Jacob (played by Wesley French) who happens to be the local forensics guy... all take Meg’s boat to the location and try and find what happened to both the scientist and... also a problem... his long since missing daughter. When they get there they find a particle accelerator/collider style invention the scientist has been tinkering with, a lot of weird noises, incongruous events and, not only the scientist who was supposed to be the dead body but, also, his estranged wife. And the shenanigans heat up from there.

Okay, so positive things first. Well, the acting is great. Everyone works well together, certain tensions are pushed and it all makes sense and feels real. And you remember that start where everything shrinks down? Well the director opens the post credits shot as a box in the screen with a police car arriving and then opens that box out to fill the aspect ratio. And this seems to be a stylistic theme going on with the picture. He does this a couple of times, shrinking or expanding deliberately truncated frames and, sometimes when he isn’t doing it from a technology stand point, he’s also doing it with the frame content, designing shots here and there where objects or architectural details obscure both sides of the screen in black and the content of the frame is suddenly narrowed to a slit or a box. I’m not sure why he does this but... it’s an interesting visual signature for the film.

Another thing I appreciated was when a few characters were standing in profile on the left of shot about to go into a room. The camera pans right with them and the black of the wall moves into frame and, you would expect here that the wall would be a cut away to see them entering the unseen room on the left as it comes into view. Instead, when the black finishes it reveals the next room alright, still with the camera travelling in the same direction and at the same speed, but from an overhead shot with the characters entering on the opposite side of the screen. So, yeah, that was a nice visual rug pull which I appreciated, for sure.

My biggest problem with The Breach (which is based on a audible CD rather than a novel... so I guess I won’t be able to read that for further clarity) is that the film telegraphs itself a little. In terms of when the scientist suddenly turns up at the house... I kind of figured out what was going on. Also, to further compound what I think is the main fault of the film, the science behind the ‘why’ of things in the movie is unclear... like I said, they talk about quantum physics and so on without actually explaining the logic, purpose or specific outcome behind the scientist’s new invention. And, when a person in the film is identified by another as ‘the breach’, the ending I was assuming was going to happen to help support that statement didn’t, quite, happen either. Or rather, in this case (and I know I’m being cryptic if you haven’t seen the film, don’t want to put spoilers here), what it turns out hadn’t happened already to one specific character we meet early on in the film... kinda helped up the ante in terms of the amount of gore and a bolder statement for the ending but, yeah, like I said, it didn’t seem to support the premise being played around with here. At least that’s what I thought anyway.

And the film is an incredibly slow burn which, to be fair, I usually appreciate in a movie but this time around, I have to say it felt the wrong side of dull in some places (and I did notice a couple of walk outs at certain points with the audience, it has to be said). However, overall The Breach was nicely put together and certainly entertaining to a point. It didn’t blow me away but it’s by no means a bad movie and I think a lot of people will possibly get a kick out of this one. Especially Lucio Fulci fans, I suspect. Also, big shout out to actress Mary Antonini, playing a cop who had absolutely magnificent screen presence in the few scenes she was in... she needs to be in more stuff, I think. Not the best but certainly not the worst I’ve seen at FrightFest either so, yeah, maybe take a look at this one.