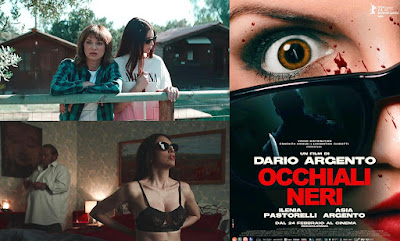 I’m not quite sure why the new giallo from the legendary Dario Argento has met with a somewhat muffled response from audiences over the last few months. Dark Glasses is, in many ways, a return to form for Argento... although I’ve frankly found something good in pretty much everything he’s done, including those last few films which received a critical mauling from fans.

This one stars Ilenia Pastorelli as sex worker Diane. In an opening scene she apparently damages her eyes slightly by watching an eclipse although, frankly, not badly enough that it makes any difference to her vision and, asides from one line in the script, I suspect this sequence may well have been a hangover from another draft of the script 20 years prior but, typically for the director, he’s kept it in anyway because he wanted a nice scene showing an eclipse (I may be wrong about this but my gut tells me this may be true, since the director has admitted on numerous occasions in the past that clinging onto a fantastic visual composition is much preferable to it actually making sense within the context of the movie).

Anyway, after a string of escorts are killed... we see one grottled to death early on in the picture in a scene where she takes a bizarrely long time to bleed out and die, while a crowd of concerned onlookers fail to help her... Diane somehow finds herself next in the line of sight of the killer. An early scene which highlights the killer to the audience is so obvious that, most (including myself) would think that this was a deliberate red herring to deflect attraction from the real killer but, no, it’s not the case. Anyway, the killer... who is somehow intelligent enough to spray his black van white after the first victim but not smart enough to repaint it again after any of the other murders or attempted homicides in the picture... causes Diane to lose control of her car. She is blinded in the subsequent crash, which also kills a mother and father in another car, leaving an orphaned boy called Chin, played by Andrea Zhang.

Diane is given a dog and a white stick, striking up a friendship with her ‘adapting to being blind’ coach Rita, played by Asia Argento. She also, unofficially and illegally, adopts the boy but, of course, the killer is after them and the rest of the movie is a cat and mouse game between the killer, his intended victims and also the police, who want to find the boy to put him in an orphanage. And that’s enough I’ll say on the plot.

So, yeah, it’s actually in many ways a typical Argento and, right from the outset, you are probably going to be in not much doubt just who is directing this one. The score by Arnaud Rebotini (which is about to come out on CD, yay!), for example, is absolutely spot on for what I think Claudio Simonetti or his group Goblin would have been doing with this material. It sounds right away like it belongs in an Argento film.

Added to this we have the fluid, moving camera work and slavish devotion to beautiful visual compositions which you would expect from this director. He loves using elements of architecture and other natural elements to split the shots into interesting shapes and this is especially noticeable in the first two thirds of the movie, before we go into a rural setting leading to the film’s finale. For instance, there’s a wonderful shot where the screen is split by a big vertical doorframe which is taking up more or less the full height of the frame on the right hand third of the composition. Behind it, through the doorway in a corridor, on the wall right behind it, is a large, vertical rectangular painting... which is angled so the top and right hand sides of it make a perfect margin within the frame, thus accentuating the vertical split. Then, to the right and slightly overlapping the door is the big foreground head of Chin as he writes at a desk. Then, the other two thirds of the shot shows the wall with various bits of furnishing and Diane as an upright vertical herself at a distance farther back from the lens. This looks really great and, of course, this kind of stuff is exactly the reason why I admire Argento’s work so much.

One thing, it almost surprises me to say, is that the acting is pretty good. I mean, that’s kind of a given in terms of his daughter Asia but, both Pastorelli and Zhang do really well here and have good chemistry. It’s not quite the same kind of relationship as between Karl Malden’s blind character and his granddaughter in Argento’s classic Cat O Nine Tails (reviewed by me here) but, yeah, I can see how lovers of his earlier works might feel a little nostalgic at this element of the story.

If there’s anything I have to say as a criticism, it’s that the last third of the film could have been a little more ingenious in terms of character reveals and kills but, honestly, it all works fine and I was happy to be watching something which is, probably, his best movie since The Card Player. That being said... yeah... I could have done without the snakes scene which makes me giggle every time I watch this one (don’t ask... it could have used Samuel L. Jackson in here yelling it up a bit, maybe).

And, yeah, this is probably one of my shorter Argento reviews but, what can I say, I enjoyed Dark Glasses a lot and I hope a UK/USA friendly, subtitled Blu Ray gets a release date sometime soon... this one deserves it (although you can certainly pick up an Italian Blu Ray with English subs at the moment... copies of which were at sale on one of the stalls at this year’s FrightFest). A nice return to form and I hope we get more from Argento soon. He’s still a visual wizard. Actually, on that last point, Dario was on hand at the screening to talk a bit about the film and he is planing to start shooting a new movie in Paris, spring of next year, which he hinted would be a remake of a dark Mexican, 1940s movie so, yeah, we shall see.