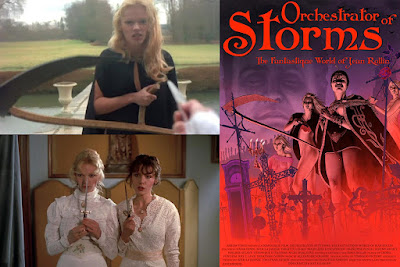 Orchestrator Of Storms: The Fantastique World Of Jean Rollin is a brand new documentary that I saw screening on its European premiere at this year’s FrightFest. And, truth be told, it was a really nice little movie. Although my first reaction to this heady concoction of talking heads, excerpts from Rollin’s cinema and behind the scenes stills was that it felt a little like “Rollin for Beginners” to a certain extent. Some of the presenters and guests for the screening seemed to be getting more out of it in terms of acquiring knowledge than I did and my first gut reaction straight after the screening was... really? You can pick most of this up from the extras on many DVDs and the few books written about the director. But then I realised that this documentary did do something new which I’m really grateful for... it did give me at least one thing I’d not known before and it also reminded me of something I’d long forgotten. And, actually, it also acts as a kind of summary for a lot of those old DVD and Blu Ray extras from times gone past so... yeah, after I got thinking about it for a bit, I figured I did get a lot out of it and, beyond me personally, this cinematic document is going to be a lot of help for people who don’t have the time or opportunity to piece together all this information like some of us were doing as teens in the 1980s, when there was no internet. So, yeah, good job.

The film talks to certain key people in the director’s life and various other experts, among them some very important ones such as the brilliant Virginie Sélavy (who I think I might have met at a seminar on Rollin’s work once and who was one of the guests here at FrightFest), the great Kier-La Janisse, Nigel Wingrove (who founded the Redemption label, instrumental in exposing a lot of people to Rollin’s work... albeit in sometimes cut form... in the UK back in the 80s and, indeed, Redemption’s recent definitive US Blu Ray editions are still the best documents of these films), the wonderful Françoise Pascal and frequent collaborator and legend Brigitte Lahaie... who was the main guest for this screening with much to say and who I was happy to meet, briefly, at a signing session after the film.

The movie takes us from Rollin’s early childhood, where I found out a little about his parents and was reminded that, when he was a very young boy, his mother was engaged in an amorous affair with the writer Georges Bataille, who was an early influence on Rollin. It goes through his early break into the film industry and talks about the riot that ensued at the screening of his first feature film The Rape Of The Vampire (which I reviewed here), putting it into context with what was going on at the time. It goes through, mostly, his personal films but it does touch on his career in the pornographic industry he used to finance his own work, perhaps a little more briefly than I would have liked since this is the stuff I genuinely don’t know much about and could do with learning a little more.

What I did find interesting was Rollin’s desire, in his final year, to try and make a movie version of Georges Bataille’s confrontational, pornographic work Story of the Eye (Histoire de l'oeil). Admittedly, it would be a tough movie to try and get past any censor in most countries but one thing which did spring to mind, when Wingrove describes the scene where a man’s eyeball is torn out and then inserted into a woman’s vagina... is that Bertrand Blier already filmed a version of that scene, pretty much, in his charming movie Merci La Vie so, yeah, maybe not necessarily that scene but it would have certainly made for a challenging movie, that’s for sure.

Kier-La Janisse once again tells the charming story about how she invited Jean Rollin to one of her first film festivals without realising the strings attached and it’s made apparent just how much that meant to Rollin and how much joy it brought him. The most moving and informative stuff in the film, though, I think comes from his technical collaborator Véronique Djaouti. There’s a point in the proceedings charting just how ill Rollin was in his final years and it gets to a point where she’s practically reliving his final night for the camera and just breaks down, unable to go on for a while. Now, I was in tears myself by this point so it’s admittedly a very powerful piece of film but I was thinking to myself... they could at least have turned the cameras off. I’m sure the footage is here by mutual consent though so, yeah, it’s strong and engaging stuff.

After the film finished there was a quite good Q&A with Sélavy, Lahaie and the man behind the new book about LeHai’s films and, I learned a lot from this too. I already had an inkling but it turns out that Lahaie has been successfully hosting a very popular two hour, daily radio show since early in the millennium and so she’s actually a very busy person these days. I’m not going to say too much about the Q&A because Arrow were filming it for inclusion on their Blu Ray of the movie, due to be released sometime next year. There were some interesting questions that came up though, including one about Rollin’s connections to the underground jazz music scene at the time.

And, yeah, I think that’s me done on Orchestrator of Storms: The Fantastique World of Jean Rollin. I got so much more out of it than I at first realised and fans of this director’s filmography should appreciate this one... especially the future fans who will certainly find this an invaluable insight into the director’s life and work. This is probably my favourite film of FrightFest this year, I think.