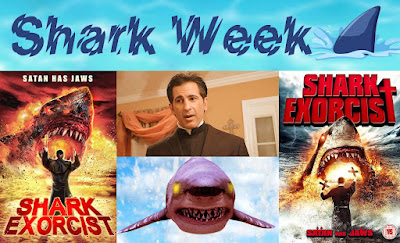 Wow. I don’t know where to start. I think it’s quite possible I’ve never seen a film so badly made and, also, so incredibly and irritatingly dull at the same time. I don’t know what went wrong with Shark Exorcist but, from a brilliantly stupid idea like a demonically possessed shark going around eating people... and possessing the first woman it bites... you have to wonder how this monstrosity turned out so bad. I mean, with a high art concept like that, you’d have to work really hard to actually screw it up, right?

Okay, having seen the most one and two star reviews of my life on IMDB for this movie, I thought I’d better give a review of this a go but... I don’t know how to talk about this without it sounding like a lot of fun. All I can say, people, is... it really isn’t. I had high hopes that this movie would be so bad it’s good. A lot of companies are doing that now, right? After the success of movies like Birdemic and Sharknado (neither of which I’ve seen but I should probably give Birdemic a go at some point, at least) it seems some really stupid concepts are turning up as deliberately bad movies to entertain the more discerning cine enthusiasts out there. They all, it seems to me from the few films like this I’ve seen, have their tongues wedged firmly into their cheeks and taking the ‘over the top but, you know, the cast and crew are in on the joke’ style of attitude, which served Stephen Sommers so well on his reboot of The Mummy, as their mantra. Unfortunately, as demonstrated with this movie, sometimes the people both in front of and behind the camera are less than able to deliver a truly ironic movie. This thing is way worse than I could possibly have imagined.

So the plot, as far as I can make out (I’m apparently not the only person who couldn’t make head or tail of half the stuff seen here) involves an evil nun who stabs a woman at the start and offers her up as some kind of sacrifice in her local lake. The nun then doesn’t turn up again until the end (in another of many sequences throughout the film that make no sense at all) but this is presumably how the demonically possessed shark, who you will only ever see floating in a stand-in tank or background and using what was probably almost the entire budget for wonky CGI, came into existence. It then bites someone, off camera and, the teeny tiny bite she has imbues her personality with the shark’s too. So she goes around eating people with some... actually quite nice looking shark teeth. The teeth are good, not the actress but, I think you only see them briefly in one or two shots.

And there’s a load of shenanigans with the lady from the local reality TV show Ghost Whackers, who also accidentally gets possessed by the shark and... some shenanigans with at least four lots of women writhing on the ground at various points for totally unknown reasons. Maybe the reasons are in some of the dialogue you don’t get to hear...

Oh right. Did I tell you this film was badly made? I’m pretty sure no post synch dubbing or building of  foley was used (apart from on the priest character, who’s barely in it and is somehow out of synch). When certain locations are used (the whole film seems shot on location), the wind in the microphone is so bad that you can’t hear half the dialogue. Seriously, the sound goes in and out randomly. And also, there’s one scene where you wish the sound did go out because... well, I don’t know if the producers could afford a second camera or not but I swear there’s a scene where you can hear what is either the sound of another scene being shot simultaneously or, I dunno, maybe they’re just rehearsing another scene in the background while they’re shooting this one. And don’t talk to me about the fairground scenes, which were perhaps be too much for the microphones to be able to handle, so they just lost the sound and replaced it with a cheap sounding score altogether. Seriously. You wouldn’t believe the level of easily fixable incompetence here. Stay with me, it gets worse.

There are some very un-shark like deaths in terms of aftermath in this movie. Don’t expect to see the shark ever interacting with anything on screen. Even when it’s stalking in less than a foot of water, you will still see it swimming in the big, blue tank. So you’ll see people hurling themselves under the water and then, when their bodies are found, they might have a little blood on their mouth or... well, this is more badly handled than I could possibly describe. And when I tell you the shark has glowing eyes, that sounds like it at least could be cool in a silly way, right? No. When you do see these shots... and you’ll have time to be familiar with them because I’m pretty sure it’s the same two or three quick shots reinserted and recycled throughout the entire movie... the glowy eyes which have obviously been put on after, have trouble sometimes staying in the right place or shimmering about and not quite always being where the eyes of the shark actually are. This is beyond shoddy.

If you’re looking for exploitation in this... you’ll be as disappointed on that score too, as you would expect some gory violence when the shark lets loose. There’s lots of shots of women in bikinis... being incompetently filmed with way too long takes, just like one of the post credits sequences in this film... where lots of barely watchable footage is followed up with something completely incomprehensible and possibly not even connected to... whatever the story is supposed to be about. If I hadn’t paid out money for this film I would have not bothered seeing this one through to the end. And bearing in mind the film is only one hour and eleven minutes long... you ‘d be surprised how much a film could drag. This thing seemed like I was watching it all day and, honestly, this film makes The Beaster Bunny (reviewed here) seem like something on the level of Star Wars. I have no idea why Shark Exorcist was even allowed onto the home video market. It should be illegal that people are being charged money for this. They should be paying us.

So that’s me done with Shark Exorcist... because I’m sitting here now trying to figure out just why I’m wasting time typing this one up. This film has only three good things going for it, which I shall reveal now. It has a good title/concept. It has some brilliant cover art... of a scene that’s not even in the movie... and it has one good line, “We’re going to need a bigger cross.” And that’s it. I wouldn’t be so cruel enough to recommend this disaster of a film to even those people who I know, like me, appreciate a bad movie. That’s 71 minutes of my life I am never getting back again and I feel like almost suing the company that allowed this one a release. Half the scenes look like they’re just there because the director and producers needed to get various family and friends in it... that’s the only reason I can think that some of the scenes are in here. Steer clear of this one folks. My only compensation is that I doubt if there’s a worse move out there I could possibly, accidentally stumble on. Just awful and it gives both shark movies and bad movies a bad name, so to speak.