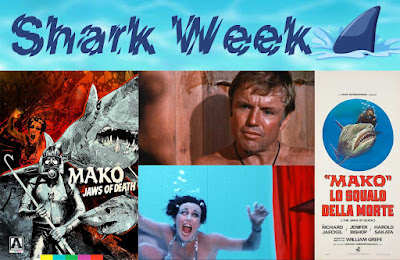 Warning: Silly spoilers swimming under the surface of this review.

Well now, I can see how some people are going to be pretty underwhelmed by Mako - Jaws Of Death (as it’s titled on the actual print... as opposed to absolutely any other title listing for the film) but, you know, I kinda quite liked it and think it’s quite entertaining in a low key kinda way. This is the sixth film in Arrow’s incredible He Came From The Swamp - The William Grefé Collection Blu Ray boxed edition and, although the print isn’t in great condition (like a lot of these films included... barely saved from vinegar syndrome before it was too late), it does still retain its widescreen aspect ratio. This is the movie that Grefé worked on trying to get funding for years before and nobody was interested. Then a little movie called Jaws caused a bit of a bloody splash in 1975 and suddenly, everyone wanted their own shark picture. So although this is not actually a Jaws bandwagon movie... and the story certainly reflects that... it probably wouldn’t have been made without the success of Spielberg’s magnum opus.

Richard Jaeckel plays Sonny Stein, the main protagonist/antagonist, depending on your point of view. The film starts off strongly with a wonderful pre-credits sequence where three men on a boat are shark fishing. One of them has one on his line... then a frogman, Jaeckel, swims up to the shark and cuts it loose. He then boards the boat and cuts a swathe of bloody vengeance through the three fishermen, feeding them all to his sharky friends.

Okay, so the film tells Sonny’s story and pictures him as a kind of recluse... but he’s well known in Florida, where the movie is set, as being an expert on sharks. Everyone comes to this lonely man to fulfil their shark needs. He’s not that willing to help but he is pressured into it. He is conned into signing over one of his sharks to a sideshow act in a local bar and a scientific researcher wants him to ‘loan’ them his pregnant shark friend for ‘observation’. Yeah, you can kinda see what’s coming. One of the ‘bad guys’ is Harold ‘Odd Job’ Sakata (of Goldfinger fame) as another ‘shark worrier’... he seems to be turning up in a few things I’ve watched recently.

At some point in the film we get to hear Sonny’s back story... which is this. In the war, in the Philippines, he was trying to escape from some bad guys. At some point he has to make a choice between staying on dry land and getting shot or jumping into the local shark infested waters and possibly being eaten alive. So of course, he chooses the latter (just, why?) but the sharks don’t eat him... instead they eat the two guys chasing him. A local shaman... who is a ‘shark shaman’ sitting on his shark throne and who hangs with an unseen tribe of shark worshippers... witnesses what has happened and is impressed. He gives Sonny a big shark medallion and tells him that, whenever he is wearing the medallion, he is a friend of the sharks and they will talk to him. So, yeah, that’s why all of Sonny’s best mates have fins and impressive pearly whites, I guess.

Anyway, things come to a head and, when Sonny finds out that the guy who owns the bar is torturing the shark with sound waves to make it seem more threatening in the tank... and also that the ‘scientists’ have killed the pregnant shark and all the babies, well... he goes on a roaring rampage of revenge, killing all the nasty humans who are being unkind to sharks.

And it was okay... I found it entertaining. It really makes no references to Jaws and even the music is, almost always, completely unlike the iconic John Williams score for Spielberg’s picture. According to the IMDB, the score is by two composers, William Loose and Paul Ruhland but, it never really seems like it was scored to work together or even with the images, to be honest. It sounds more like needle drop to me and I wonder if these composers actually did work with Grefé on this movie or whether he just took existing music by both of them and dropped it into his film.

Jaeckel cut his head open on one day of shooting (the same day the camera was accidentally destroyed and the boat needed for the shoot hit a sand bank)... but he was apparently stitched up at the local hospital and back on the set in no time. I don’t know if this explains why, in some of the ‘swimming with Mako sharks’ shots, he has a big stuntman standing in for him... a stuntman who’s desperately trying to obscure his unfamiliar face from the camera by hiding it behind the shark’s fin. It looks pretty funny, it has to be said.

Not too much more to be said about Mako - Jaws Of Death really. It’s not particularly well put together in terms of the way the frames are designed or anything but it’s a more than competently sewn up movie experience (there are many movies out there by directors where you couldn’t say the same thing), it’s fairly fast paced, it’s entertaining and shark whisperer Jaeckel gives a real good, mean and pyschotic stare when required. Not a bad movie but, like I said, a lot of people are probably not going to give it much time. I liked it though and, yes, I’d watch it again.