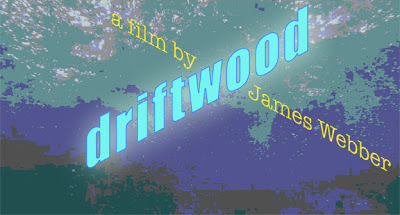 Driftwood 2012 UK
Written and Directed by James Webber
Produced by Meddy Ford and Freddy Green
Viewed at the request of the director.

If you’ve been reading my blog reviews for a while now, you’ll know that I started off with a general sense of creeping dread towards ‘short films’, but that the more exposure I’ve had to them over the last couple of years since I’ve been doing this, has allowed me to embrace the format a little more gladly. Don’t get me wrong. My three favourite shorts are still Dali and Bunuel’s Un Chien Andalou, Svankmeyer’s Virile Games and Scorcese’s The Big Shave... but some of the films I’ve seen over the last couple of years by people like Leilani Holmes, Damien Cullen, Rouzbeh Rashidi and James Devereaux, to name a few, have really challenged my tired old “I can’t be bothered” attitude to this particular species of the art form.

I saw four shorts at BAFTA just over a week ago (review here) and, based on the qualities, such as they are, of that review, a director called James Webber DM’d me on Twitter to see if I wanted to take a look at his new short called Driftwood. I said “yes”, of course, being that I’m always genuinely flattered when someone can make it through reading one of my blog entries without gnawing their own legs off, and put in the proviso that, if I didn’t like it, I wouldn’t review it... I don’t like to publish negative reviews of a film if a specific person involved with it has actually asked me to take a look at it.

Driftwood tells of a little episode in the life of a young man training to be a competetive swimmer.

It starts off with a slow, but steady, pan/reveal of the central character, Sam (played by Sam Gittins) in a swimming pool changing room. This is cut (almost violently, in terms of sheer agressive editing) to a shot dollying in from the front of the character and the juxtaposition of this relatively speedy shot combined with the look of determination on Sam’s face when he looks up as the camera closes in on him, gives one a real sense of the dogged, self-motivation of the character. This guy wants to win and it’s interesting because that sense of fluid, forward momentum created with the movement of the camera continues during the opening credits, which are intercut with similar set ups showing a relatively static person (static in his own space) combined with this constant state of motion, or ‘moving forward’ from the camera.

It’s actually very powerful because you can almost feel the central character, and the film for that matter, storing up its potential energy by expressing it with a kinetic camera eye, so to speak. Waiting to pounce on you once the credits have finished. Sure enough, as the story starts proper, the stillness of the central character stops (mostly) and we have three parts of the story intercut with each other, each working through in a linear fashion but each part filling in little bits of information about Sam as the camera eye moves back and forth between one part of his story and another, before returning to a fourth, bookending, slice of the story (for want of a better word).

It’s long been my belief that you don’t need everything (or sometimes even anything) spelled out for you in movies and the short film format proves this again and again. Driftwood, throughout, uses the central character and observations about him as you see little details of a bigger story, to give you all the information you need to give incidents an overall shape in your mind. As it cuts between a session with Sam’s trainer played by Brandy Doubleday, a run in with a bully and his gang of thugs, and Sam’s problematic, abusive father, played by the excellent Neil Maskell (who I knew from his outstanding performance in last year’s Kill List, reviewed here)... before reuniting with the opening of the picture to bring us the actual event that Sam has been training for... you are given the chance to ponder the little connections between the events that happen on screen.

Questions like why his father has become abusive and why Sam has become like he is, for example, are referred to in both the sequence with his father and in the run in with the gang of hoodlums. The implications of death and loss are visibly portrayed without ever implicitly stating or overstating what the audience will pick up on. Other details, like the nasty scarring on Sam’s back which his trainer is so obviously concerned with, are left for the viewers to make a decision on for themselves, as to the source of this wound.

This is, I’m happy to say, like a lot of independently produced films outside of a big studio system... not a passive experience for anyone watching. This is how more films should be, giving the audience a little more of an interactive role with the flickers of light and sound beaming into their souls at 24 frames per second and, I’m glad to say, that the end of this film will not wrap everything up in a neat little parcel of ‘closure’ for you. This is a short that doesn’t want to pander to you or spoonfeed your mind but grab you by the collar and ask you to really respond to what you’re seeing. And this short, in particular, does contain a certain amount of, what I like to call, ‘power between the frames’. It’s beautifully shot, well performed, has a nice score which is reflective of the sense of a character drifting from one situation to the next (as suggested by the film’s title and also by the style of the shooting and editing... if I was paying attention to what I was seeing properly) and which also gives you a sense of building to transition within composer Richard Keyworth’s notes, like a caterpillar emerging from it’s cocoon as almost a new species. This, naturally, highlights the ultimate promise of Sam’s original look of wilful determination, foreshadowed straight away in what is only the second shot of the film.

The ‘to-ing’ and ‘fro-ing’ of the camera movement and the rhythmic editing style pull the viewer in to the film almost hypnotically and won’t let you go until the short running time has ended up exactly at the point where the director wants you to finish filling in the blanks, so to speak. This is a really great use of cinematic syntax that will keep your mind occupied and, dare I say it, entertained to the point where you may find yourself haunted by it once the film has stopped running. Don’t get me wrong, this isn’t an epic and, obviously, the nature of the short film format kind of precludes that kind of accomplishment anyway (you watch, someone will go and prove me wrong now), but it is a very satisfying and, ultimately, extremely watchable piece of moviemaking. It just shows the incredible talent we have here in the UK working on such great, unsung gems who need to be given the money to make their own feature length movies. So if you find yourself in a position to give Driftwood a watch, then it certainly comes with my recommendation. Anybody who can work the visuals like this, whether it be the story of a swimmer in training or whatever else is in the writer’s head, deserves a larger audience and a bigger budget to bring their vision to the world.

So it’s a big thank you from me to this particular director for doing me the honour of letting me watch his new work. And I’m also really glad I didn’t hate it. ;-)