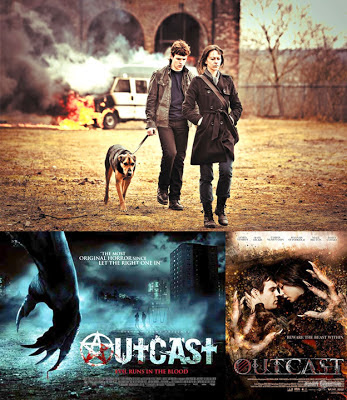 Warning: A few spoilers but nothing too major.

This is a nice little find. I’d not heard of this movie before I read about it in a book the other week, but I’m really glad I ordered myself a cheap copy off of Amazon.

Set in a depressed, council estate in Edinburgh, a woman and her adolescent son rent a very run down, delapidated, 10 notches below ‘fixer upper’ of a flat and it doesn’t take you long to notice that there’s something a little odd about these two. Once they are in, for example, the mother paints strange symbols on the walls and it doesn’t take much to figure out that a) these two are on the run from someone (or something) and b) the mother is a witch and her son is... aha. I’ll not get ahead of myself there.

With these symbols ‘protecting them’ in their new home, the flat itself seems to be cloaked from anyone meaning the two of them harm. This is amply demonstrated (or should that be ‘demon-strated’) by the fact that the lady from ‘housing’ cannot find where these two live, even when she is standing outside their very door. Something stops her from recognising the flat, even though she has the number written down for her.

This little scene itself is used to impress upon the minds of the audience that the mother, Mary, played brilliantly by Kate Dickie, is actually a fairly potent witch and that she’s best not crossed. Something which becomes very clear when she goes out to talk to the same lady a little later in the film and puts a curse on her so that she wanders around the council estate forever, not knowing why she’s there. She can hold her own against her ‘own kind’ pretty well too... as seen in a few scenes scattered throughout the movie.

This low budget, UK witch movie exudes a kind of raw style which makes for a very rewarding watch. The two are being pursued by the boy’s father,  who is tattooed early on in the film with special symbols which give him “witched up” supernatural powers of his own to aid him in his hunt. There’s a nice scene where he cuts open a bird and follows the way the blood is pointing... and another where he basically has a mentally projected battle of wills with Mary from afar... similar to the kinds of things you used to see in the old Dr. Strange comics in the sixties. Mary once again proves her worth as a witch... and the fact that when she’s getting especially witchy that she also gets a bit naked might also interest a certain percentage of the viewers.

Meanwhile, her son is busy falling in love with the girl in the flat next door and all this is happening against a backdrop of gory murders in the area. There are quite a few little British character actors in this, including the inimitable James Cosmo as a kind of local ‘witch godfather’ (I still remember him best in Brond and also as Jock in the 70s Dick Barton TV serial... good times) and a small appearance by a certain female who had just gotten famous by the time this film was released...

Yes, I was actually gobsmacked when I noticed a friend of the neighbour was played by Doctor Who companion Karen Gillan. She is only in two brief scenes, with only a few lines before she’s dragged off and ripped apart by... well I won’t say by ‘who’, but if you’ve seen the cover of the UK DVD box then you’ll have a pretty good idea of ‘what’. There’s a ‘not badly done’ beastie in this movie and if you’ve been paying attention to the story in the film, it won’t take you very long to figure out who this beastie is when they’re not being a beastie... although I won’t say who it is here. To be honest, there’s a lot of deliberate misdirection in this film to kind of hide the identity of this particular ‘outcast’... but ultimately this doesn’t really succeed in blinding the audience to the inevitability of the identity of the movie’s central monster.

But that’s only a small fault and it would be a shame to judge the entire film by this because, frankly, it’s a well crafted, reasonably intelligent, British horror movie and deserves to find its audience. If the Hellblaiser comics had been done properly instead of having the basic character changed and too much money thrown at it (like it did with the Constantine movie, which was an enjoyable but hugely inaccurate adaptation of the source material) then I’d expect it to turn out a little more like this movie here. It’s probably the lack of budget which really helps this movie stay focussed on the function it’s trying to perform in the script, is my guess, and it certainly lends it a certain charm and reigns it in when a bit of money thrown at the odd scene or two might have actually harmed the uneasy feeling of authenticity it manages to carry off  at certain points too. The creature looks a little less sophisticated than it might be in a Hollywood project, for instance, but that too is really not bad and I much preferred it to some of the terrible, over-used CGI rubbish we’ve been getting over the years.

The film is competently shot and edited and has absolutely brilliant performances, as you’d expect from a lot of the “haven’t-I-seen-him/her-before?” character actors who turn up in this one. A really good watch if your in the mood for a modern day story of witches and monsters which doesn’t pander to the lowest common denominator audience and doesn’t outstay its welcome. Worth a watch by pretty much anybody, but especially if you have a passion for this kind of modern spin on a Dennis Wheatley vibe. Don’t let this one get away from you.