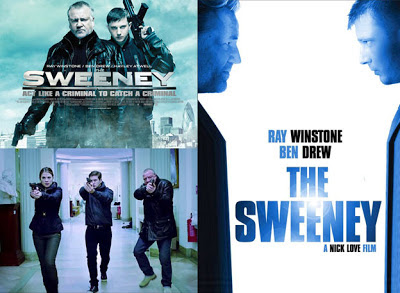 Hmmm. Yeah, okay. The Sweeney. Wasn’t going to bother seeing this one.

Especially after those dire tie-in Orange trailers in the cinema.

But then somebody on the Film Score Monthly message boards (where I sometimes lurk) spoke very highly of the score and, since I knew it was available to buy on CD (at least, in the UK it is), I thought I’d go and check it out before it finishes its run, after all. As you may have gathered, if you’ve read a handful of my reviews in the past, I’m a sucker for a good score.

I never really used to watch The Sweeney much when I was a kid. It was on in the background I think... but I’m pretty sure it started up around about bedtime and I never got to see too much of it. I remember the theme tune, obviously. One of those highly charged pieces of TV scoring that the British used to do so well in the 60s and 70s.

I seem to remember seeing a bit of one of the two movies they made in the mid to late 70s. It was a specific piece of cinematic violence where a policeman was talking to someone and a sniper shot him through his helmet and a blood squib went off from said helmet as he went down. I remember it having a fairly visceral effect on me and thought, at the time, how well done it was. I think I did catch up to the movies properly again sometime in the 80s, but really don’t remember much about them. So bear in mind when you read this review that I really don’t have a lot invested in the characters and can’t tell you whether it’s a respectful adaptation or not.

What I can tell you is that it’s a very curious blend of a movie. The whole attitude seems to be mid-70s complete non-political correctness gone mad (which is fine) and I firmly believe that without the popularity of the BBC shows Life on Mars and the follow up series Ashes To Ashes, this movie might never have got greenlit. It wouldn’t surprise me if Philip Glenister, the star of both those shows, was approached for the role of Regan in this film version at one point... since his character in those is such a parody of that kind of role.

What we have instead is an actor I don’t know very much about, called Ray Winstone, in the role. Now I usually tend to steer clear of this actor, not so much because of his particular style but, mostly because he plays gangland criminal types... and I really don’t like those kinds of characters. They frighten me. Saw too much of that rubbish for real at school as a kid. In fact, a quick check of the International Movie Database reveals that this is only the third movie I’ve actually seen him in... the other two being Scorcese’s Hugo and Spielberg and Lucas’ much maligned Indiana jones And The Kingdom Of The Crystal Skull. Although, I do believe this movie is kinda coming full circle for him, since he apparently had a role in the original TV series of The Sweeney playing, again according to the IMDB... “second youth”.

As it happens, and most people already reading here probably know this already, the man in question is a pretty good actor... one of those who can combine a love and flair for their craft with a certain charismatic presence and gravitas which makes them stand out from a good deal of their colleagues. He gives the character of Regan a lot... I am just not in a position to be able to tell you whether he is faithful to John Thaw’s interpretation of the role. But he’s pretty likeable and watchable in this... which is all I personally have a stake in, to be fair.

And the guy they have playing Regan’s right arm is some kind of singer apparently. From a group called Plan B? Or maybe he is Plan B, I don’t know. Anyway, his name is Ben Drew and, frankly, he looks really young. He’s 29 but he does look like a bit of a kid. No worries though because, I have to say, I was blown away with his performance too. It’s credible and for an actor who, by the looks of things, hasn’t had a great deal of experience, he more than holds his own against Winstone and the two do have a certain chemistry between them. Again, I’ve no idea how much of a match this is to the original character as played by Dennis Waterman but... well, it is what it is.

The Sweeney is a tough film and its a strange mix because, while the macho, non-politically correct attitude and style of speaking of a 70s cop drama is very much on display... the film is actually set in the present day. I had a little problem adjusting to this because, honestly, there’s no way I can imagine the police these days getting away with harvesting and nurturing some of the values they do in this movie and staying in the force for longer than 5 minutes. Maybe in the 70s, but not now. So while the film is quite hard hitting, which gives it a little traction and credibility (or at least the illusion of credibility), it’s already, right from the word go, entered a kind of “copper’s fairyland” in its setting and, I think it would be true to say that the events which go down in this film would really not leave the main characters to get away at the end comparatively unscathed as they do here. This is completely unreal.

But so what? It’s art. Art is allowed to be unreal.

Another slight problem you might want to level at it is that it’s full of clichés in the various story set-ups, which you will just be waiting to come to fruition later in the movie. For example, Carter’s girlfriend is pregnant and young. Regan’s girlfriend is someone he’s having an affair with in the squad (Sweeney Todd, Flying Squad... geddit?) who is the wife of the head of internal affairs who is investigating the squad's “methods”. You get the picture. At least one of these gals is going to get either hurt or blown away... just to make things a bit more personal. You see it all coming a mile off but... oh well, it’s an old formula but it kinda works.

One of the reasons it all kinda works, though, is because the scenes are nicely shot and smoothly edited with big, dynamic, action set pieces, including a full on shoot out in Trafalgar Square, which transport you along with them. Big shout out to the people behind the sound design (a company called Sound Disposition) on this one. It’s noisy and has a lot of presence in the mix without stepping to heavily on the musical score and, as a result, everything comes alive and gets right in your face... err... right in your ears, when it needs too. That’s good.

Oh yeah... and about that score. By a guy named Lorne Balfe? It’s fantastic. Very close to the sound of the kind of thing Hans Zimmer and James Newton Howard have been doing in their Batman/Dark Knight movies of late and it’s definitely a style that’s on the upswing. I honestly don’t think we could have arrived at this particular kind of modern day sound without the influence of both Bernard Herrmann and Philip Glass on the genre, but those are two pretty good influences to have and I’ve noticed a lot of the old school composers, like Johnny Williams for example, have started lapsing into this repeat cell motif thing of late. Balfe’s score for this is like... one step up from The Dark Knight Rises. It’s almost operatic in tone (with maybe a touch of techno in it’s chemical make-up) and you would expect a film dealing with a small, British cops n’ robbers plot to almost fall apart under the weight of such a score... but it doesn’t and the score is so skillfully mixed in with the rest of the sound work, that it also really helps support the on screen action and drama. Powerful stuff which, incidentally, works really well away from the movie as a stand alone listen.

So there you have it. Don’t expect anything original from the story in The Sweeney (I think there may even be a revelation about one of the characters which has got lost in the final cut somewhere too, because I think there was more going on with the story than what we got on the surface) and if macho posturing and tough guy politics is not something you feel tolerable, probably give it a miss. However, if you want a pulse-pounding, ballsy Brit-flick* with lots of shooting and a simplistic but welcome subtext about camaraderie and redemption, then you’ll be alright for a couple of hours with this one.

*How’s that for matching the movie, cliché by cliché? :-)