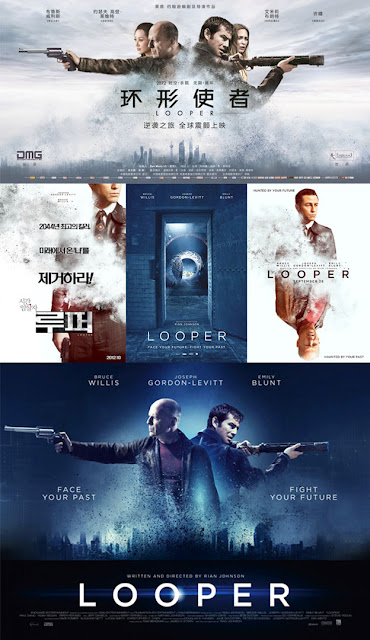 Warning: Ever so slight imagery spoilers
looping back through time to confront you.

I’ll admit it up front. I, more often than not, just love stories based around the concept of time travel. Mainly because you can set up so many ironies and mind-blowing revelations just from tinkering with somebody’s past that it makes for some great tales. Stories that can explore ideas and follow through on arcs which remain inaccessible to fictional explorations in other genres. Like most good science fiction does, for that matter.

That being said, I really get angry when the basic temporal mechanics of a piece gets screwed up by mistakes of obvious logic in the story. Sometimes, a writer will fudge a common sense outcome of a change in time and run with it to make the rest of the story he or she has in their head a possibility, rather than find another, perhaps less obvious, route around to the sequences they want to drop in. Back To The Future Part 2, for example, doesn’t just fumble the ball in this regard, it darn well drops the ball and then ostentatiously kicks it out of the field in its complete lack of concern for the rules set up by the man made measure that is “the passage of time”. There’s a moment about a third or a half of the way through that movie when the whole rest of that movie, and the whole of the next installment, couldn’t have actually taken place in the realm of the Back To The Future universe they’ve set up, because a character returns to a point in his future which is no longer there because he’s already erased it. Stuff like that is just plain sloppy... not to mention as irritating as hell.

Steven Moffat, I feel, sometimes has the same problem with some of his Doctor Who story arcs... which sometimes tend to resort to what I call “the Tinkerbell syndrome” in their ability to reach a successful story conclusion. You know what I’m talking about. We’ve completely destroyed the science of the piece but, guess what, if you believe in Faires... it will magic it back up again out of the ether! That kind of lack of logic is used like a crutch too often sometimes (yes Pandorica, I’m looking at you!).

I’m happy to report that writer director Rian Johnson has no such problems with his new time travel dilemma movie Looper. Or if he does, then the sleight of hand with which he maintains the illusion of complete plausibility of a man who is in a state of flux because of changes to his past happening while he is at present in that past, sent back from 30 years in his future, is absolutely credible and makes absolute sense.

Consequently, Looper isn’t just a believable, fictional universe to find yourself watching... it’s a vital and, frankly, scary cinematic wonderland in which to get lost in for a couple of hours (or 30 years, take your pick).

I’d seen Johnsons debut feature Brick some years back on its initial cinema release, and I was completely blown away by it. So I was really looking forward to Looper until I started to see the poster marketing for it. Note to advertising agencies: comparing a well put together, moody and extremely gritty, time travel noir like Looper to a piece of rubbish like The Matrix, may put off fans of proper science fiction. Seriously, when I saw the advertising calling it “this years The Matrix” it really put my expectations down a notch. You might as well compare it to other, not so great and abysmally over-rated sci-fi movies like Avatar and Inception. However, like I said, I had seen Brick and so I went to take a look at this one regardless.

Like Brick, everything in this movie works so well and comes together so beautifully that you just get swept along in the illusion of the thing. Everything works towards the focussing of a single vision all the way through... set design, knockout performances from everyone (not just the leads who are, obviously, excellent), music by Nathan Johnson which supports this movie in a different way to the way in which his music in Brick worked, marvellous editing... everything works together so well that you’ll feel the intelligence and single-mindedness of the writer/directors intent as every frame passes.

And it’s a harsh world in which you’ll spend your time. A plot involving killers called Loopers who close their own loop by killing themselves from the future as the beginning of their 30 year retirement plan is the main focus of exploration and the identity of a criminal mastermind from the future called The Rainmaker becomes the raison d’etre of the shenanigans in which our two main protagonists... who are actually the same main protagonist from two different points in time (and possibilities in flux in terms of the older of the two facets of the character)... become caught up in. It’s actually a simple plot when you think back on what you’ve seen after the movie is over... but Johnson pulls it off so intelligently that you’ll see where the big pitfalls could have gone and how he managed to avoid screwing with the temporal logic while pushing it right to the edge on occasion. There’s just one little mistake I think might have been made in one sequence towards the final scenes of the movie, but it’s the kind of mistake you seem to see in movies all the time these days (as if that should excuse it) and it may be the result of the film losing some footage in the final cut. Most people aren’t going to question it in the heat of the moment and I’m not going to point it out here... it doesn’t involve time travel.

I think what I’m trying to say here is... not only is Looper a good sci-fi movie... it’s an adult movie in a cinematic landscape which is constantly providing less adult orientated content. There’s also some stuff which is truly horrifying in it... such as the scene where the writer/director is showing you how a Looper can be damaged to change his own future self without actually screwing up the possibility of an infinitely different future, while also killing a second bird with the same stone and using this to show how the two/one main protagonist/s can communicate with each other. It’s all good stuff and will keep you dwelling on the implications long after the imagery lingers in your mind. I don’t want to spoil anything here but... the image of a man running for his life and having his foot disappear because his past self has just had it deliberately amputated to slow him down is not one I’m going to forget in a hurry.

So there you have it. A brilliant script, well acted, designed and scored, from a very young director who is an absolute master of his game. Anyone who thought Brick was a flash in the pan can think again... I think this movie will be pretty successful. Not necessarily at the initial box office take but certainly on home video formats and in terms of something that will still be watched with admiration and hailed as a minor classic in years to come. If you like science fiction, then Looper needs to go on your to watch list quick before it vanishes from cinemas as quickly as most movies made for actual adults do these days.