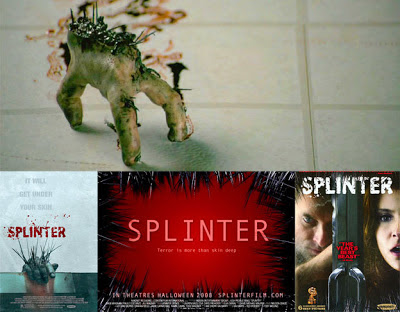 Warning: Some spoilers waiting to spike you and infect you with their very DNA.

Okay, so I seem to be having a pretty good track record with horror films this week. Splinter is another cool one, obviously made on a tight budget, but it’s quite an effective little addition to movies which involve alien or mutated creatures taking over host bodies to survive.

During a pre-credits sequence, which sets up the prime location for the majority of  this movie, a gas station worker is savagely attacked by something which looks like a cross between a fox and a porcupine, the titles appear and we are introduced to two sets of characters who are on the same long road as the gas station. A warning sign by an area near the road about “experiments” should probably have not gone unread by anyone in this movie. As it is though, it does serve to set up in our minds the lack of explanation for the rest of the narrative, as in... the government are doing weird stuff and something dangerous has obviously got out.

Our first young couple, Polly and Seth, are planning on camping out in ‘The Big Outdoors’ but have to change their plans when Seth breaks the tent... so instead they get back in the car in search of a motel. Which is unfortunate because they stop for a hitchhiker, Lacey, when they really shouldn’t have. Lacey’s boyfriend, Dennis, is a psycho criminal (just like Lacey) and he’s armed. They were heading for Mexico, on the run, but their car has died on them. They need Polly and Seth’s car and insist, in no uncertain terms, that the two of them accompany them in case they are needed as hostages before they can get to their final destination.

Unfortunately for them all, Polly accidentally runs over some kind of critter who, you guessed it, is probably the same critter that attacked the gas station owner at the opening of the movie. While psycho Dennis helps Polly change the tyre, he scratches himself on one of the quills sticking out of it... anyone in the audience who has ever seen a horror movie in their life now knows he’s infected, of course. Then the thing that they run over starts to chase them away... then their radiator goes up in steam but, as luck would have it, they happen to find... you guessed it... the gas station from the start of the movie.

That’s the entire set up and after that, the story never roams from this location.

For a low budget shocker, this movie is, I’d have to say, made remarkably well. Displaying a certain sense of artistic style in both the framing of the shots and, more importantly, the camera movement... the film starts up with long camera swoops through all the scenes that establish the locations and characters. The shots tend to either slowly track in to meet the oncoming action or, conversely, track away from it, in a kind of meet and greet kind of relationship to the subject in the main narrative focus. For example, when a car zooms along from right of screen at an angle towards the camera, the camera will pan over from the left with the same sense of speed to meet it.

Once things are established though, the director also throws in static shots and, especially when all things start to go pear shaped at the gas station, a lot of hand held camera and a heck of a lot of fast edits. Actually, I’d have to say, that if there’s one thing that jars in this movie a little bit, it’s the fact that the editing is a little too choppy to see what’s happening on occasion. This works for it in some sense... I’m guessing the crew didn’t have enough confidence in their special monster effects to show it without a heck of a lot of movement and cutting on it... it looked okay to me though and, as I said, for the most part, this style gets a bit irritating in some scenes. The one place where it does pay off dividends, however, is when one of the main characters disappears from the narrative and you don’t see where he went... which is exactly the same plight his companions have as they didn’t see him go either... so that works pretty well as a nice piece of mis-direction.

There’s some genuinely nice stuff in this movie, including a tense scene where the main protagonists are locked in the gas station and a police sherriff refuses to leave them because she thinks this is a hostage situation and doesnt realise that, you know, there’s a big bugger of a spine monster running around on the roof and waiting to pounce on her. A spine monster, I might add, that can lose bits of its limbs etc and then those infected human or animal body parts will grow a mind of their own and start chasing you... the sequences involving a half a hand running around like cousin ‘it’ from The Addams Family will possibly scare you... but it might also make you giggle quite a bit.

Another tense scene of suspense is where one of our heroes’ goes to get to the car outside by half freezing himself and carrying ice to keep his body temperature below 93 degrees... because this is something he thinks the creature is using to track them. As he can hardly move because he’s frozen and he makes his way to the car with his body temperature rising on his handy ‘audience friendly’ thermometer... the tension builds solidly and it’s nice to see this kind of “countdown to possible doom’ scene handled with body temperature as the key element to it, for a change.

The score is suitably dark and edgy, done by Elia Cmiral who may be best remembered for his score to Frankenheimer’s Ronin. It’s pretty good modern horror scoring/sound design apart from a jaunty/upbeat twangy thing near the start of the movie when Polly and Seth set off to find a motel... yeah, could have done without that bit. It’s way too cheesy. Everything else in terms of the musical scoring is pretty cool though.

And that’s about it... a modern, low budget horror with a monster that resembles the early incarnation of Victor in The Quatermass Xperiment, in which the polar opposites who are thrown together in this situation begin to find a common bond and the evil psycho character also gets his shot at redemption. Maybe a little formulaic, it’s true, but when it’s done as well as this one is... sometimes it’s okay to be a little predictable. Would loved to have seen a sequel to this, as opposed to some of the trashy horror movies which undeservedly get a next part to them these days, but don’t think that’s going to be happening anytime soon. Still, a fun little survival horror movie that fans of movies like John Carpenter’s remake of The Thing will probably enjoy a lot. Make a point of seeing it... just don’t let it scratch your fingernail with that point.