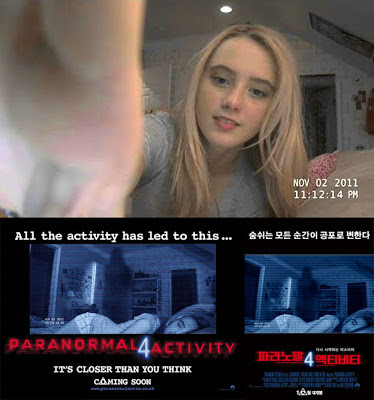 Night Of The Hunter

Which is not a bad thing.

I’ve actually got a lot of respect for these “nicely done” little scary movies as you’ll know if you’ve read my reviews of the previous three here, here  and here. Ultimately, I didn’t think the first movie was scary... but the audience obviously did and, scary or not, I thought it was neatly done. The second and third movies I found very scary and also thought they carried on the magic as a franchise pretty well.

This fourth one is not so scary as the last two, but it still quite pant-wetting in places and so I still rate the fourth film a little higher than the first. Ultimately, though, I don’t think it’s quite as well done as the previous installments and I’ll get to why that is a little later. However, it does have a really neat little twist about two thirds of the way through which upends your assumptions (assumptions carefully cultivated by both the trailer and the opening of this film) which scored big points with me because, well, I’d been taken in by my own expectations and for a movie to fool me like that... that’s kinda cool.

I think a few people have mentioned that there’s a twist in it and, without giving away what that twist is, its introduced in quite a low key way (the characters in the film have no idea there is a twist happening because they’ve not seen the previous movies) but which will instantly explain why the events happening in this film are occurring with a family we’ve never even met before. It will also change what you know about one of the characters... but that’s all I’m saying on that part of the story element.

It’s a jumpy film in places but it’s not as 'skillfully scary' as the last two in the franchise, even though it’s trying to be really smart with some of its set ups. For example, in the third movie I pointed out that we all know right from a particular gadget’s first appearance, why a camera has been fitted to a fan. We know the kind of “reveal” games the director wants to play and this is indeed what happens... but I also noted that, even though we could see the mechanism and it clearly foreshadowed the action, the scares were still pretty awesome.

In this one, there’s absolutely no reason for the characters to be walking around with cameras for the first 20 minutes or so... I feel this is a big weakness in the opening of the film. I’m sorry but... teenagers don’t all go around obsessively filming absolutely everything and never taking away their cameras from their faces, right? I understand the skype stuff, so I’m not talking about that, but it just seems a bit weird because the characters have no reason, for a while, to be doing this... as opposed to the characters in the first three movies, in which case it was understandable. However, 20 minutes or so into this movie, that particular weakness in the script is taken care of by having a set of “spy cams” installed at various locations around the house. Which, in turn, leads (eventually) to my point about why the movie isn’t as skillfully done as the original...

The film-makers have learned from their foreshadowing errors in the third film but the way they’ve responded here is, perhaps, to overthink it a little. What they do is deliberately tip-their-hats again by showing us opportunities for where pop up scares can be... a fridge door when opened obscures the camera vision, for example, and you are just waiting for it to shut and 'reveal'... but mostly this and similar setups are not really picked up on. So in a way it’s still a bit of a win situation, because you are overly anxious and worrying about when certain things are going to happen whenever you see a particular set-up... but ultimately it’s a bit of an anticlimax because the alternate shock moments they use to counter these expectations aren’t, in about half the cases, as scary as the much anticipated scare moment might have been.

Another slightly fumbled moment, and I don’t want to give too much away here, is when a piece of kitchen cutlery goes missing in a pretty overtly supernatural manner, which the audience is in on but the characters aren’t. You are left waiting for the expected consequence of this scene and the writers smartly go away from this element of the plot for a while and try to distract you with other things. The trouble is, you just don’t forget this little 'party trick' so easily, so when the pay off comes... you are expecting it and, frankly, imagining far worse than what you actually get delivered. I think it would have worked better if enough time had gone by within the movie’s running length to let the audience properly forget about this... ahem... missing item. This didn’t work nearly as well as it should here. Like a bad comedian... the timing was just off.

Similarly, the trailer for this film, like the trailer for the third installment, is made from footage which isn’t in the actual movie... although this one could at least have genuinely been slotted into the running time is my feeling (which wouldn’t have worked in the case of the trailer to the third movie). I was annoyed about this because, frankly, the trailer is quite creepy... and it also helps set up your preconceptions so the twist that comes later is able to work. It’s pretty much a variant on the uneasy original teaser trailer to the 2006 remake of The Omen... which also didn’t make it into that movie, as far as I can remember.

Another weak point is the fact that when stuff really starts happening properly, and if you’ve ever seen any of these movies you’ll know exactly what I mean (when weird stuff gets real), neither of the two teenage characters who can access the spy footage they’ve set up for just this purpose actually bothers to check what crazy stuff has been happening in their absence. There’s one scene in particular when one of the characters takes part in 'an episode' through which she sleeps. Honestly, if she’d actually played back the footage, she would have been out of that house for good... but she doesn’t. This seems somewhat strange and contrived, to be honest.

The ending sequence, too, is another sore point for me. Although it contains some nice effects, it just feels too similar to the ending of the third movie... just not quite as scary. I was hoping for something a little more interesting, if truth be told.

So yeah, there were a lot of elements that didn’t work for me here.

However, it’s still a pretty good movie and it’s a genuine sequel to both the ending of the second movie (where Katie zaps her sister and walks off with little Hunter) and the background history of a witches coven who are in cahoots with the demonic ‘Toby’ from all the installments in series so far.

And for all those ingredients which didn’t quite mix as well as I would like, it has to be said that there’s also some really nice things which do work in this movie. It’s still a little scary, for one, and it did elicit the usual “so silent in the cinema you could hear a pin drop” reaction juxtaposed with the “scream out loud and then, possibly, giggle a little to offset that” reaction from the audience I was with... which is to be applauded.

Also, the more blatant of the CGI effects used in this one... that is to say, not the ones that hide all the wirework and stuff... are actually quite special. The demonic faces you will see in this one work really well and are pretty much an extension of what they started doing in the last two... but much, much more menacing. It all works so well and the second reference I spotted in the movie to Kubrik’s version of The Shining (the first being an incident involving a kid riding a mini pedal bike around the house), when a demonised version of one of the characters chases the person who we’ve come to think of as our main protagonist and gets stuck halfway through the splintered door frame like Jack Nicholson peering through... is really a great visual moment of the series. It’s just a shame they didn’t linger on it for a little longer... but by that point in the movie everything is ramped up way past eleven. It’s definitely something I would like to see a ‘still photograph’ of, though.

So yeah, ultimately, I think I’d recommend this film to most people. I wouldnt make it the first one you see in the series, by any means, but if you’re a fan of the first three movies, while you may find it just a ‘touch’ disappointing in direct comparison, you should still have a good time with it and it certainly doesn’t tarnish the good work done in the first three. And, yes, I am looking forward to their being a fifth one for release for next year’s Halloween run up. I want to see what Katie did next!