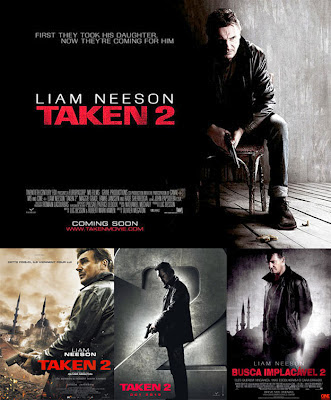 Warning: This review will have a very particular set of spoilers.

Two days previous:
“Okay movie, now listen very carefully. I have a very particular set of skills which makes watching films like you very easy. If I like you, I will say good things about you in my review. But if you don’t live up to the spirit of the first movie of this franchise... I will find you. I will watch you. And I will review you poorly!”

Now:
You know I really loved the first movie in this series of films. We’d all seen Liam Neeson jump around with his Jedi skills in the Star Wars prequel trilogy, but I think this might have been one of the first times (if not, the very first?) that we’d seen him groomed by a director to be an out and out action man. We all knew he could look the part and that he could be convincing enough as an actor to make us believe it to an extent... but could he actually do a gritty, tough guy action movie without it looking really silly?

The resulting film was a resounding success. A popular movie with most of my friends (including me) and a fairly good profit “taken” at the box office... even though it turned out the initial cut of the film was severely compromised (this was thankfully restored on the eventual DVD release). Less successful was a follow up movie which Neeson headed up and which was trying to hit the same “audience vibe” as Taken. That one was called Unknown... and, unfortunately, the script let it down abysmally (see my review here).

I’ll say up front, right now, in case you think this is going to be a negative review and can’t be bothered to read anymore or skip to the end, that I had a lot less problems with Taken 2 than I thought I was going to have. I think it does have some things about it which are less than stellar but I feel, overall, the criticisms I am hearing of this movie are a little over the top and, frankly, inaccurate. If you want to hear what I think the basic problems are and whether you think they’ll spoil your experience at the cinema with this one then, please, read on.

I had some serious worries about Taken 2, and these worries stemmed from four sources. Number one was that, about a year and a half/two years ago, I read that Neeson hadn’t wanted to rush into a sequel based on the strength of the script he’d seen. I can’t remember which magazine news-feed was the source for this, but it said that Besson had replied something along the lines of... “whether you think the script is ready or not, we shoot at such and such time or... you can just not be in it”. At which point a key player in this as I see it, Mr. Neeson, got on board. A pay check is a pay check, after all. But this says to me that the script was really not in a state he wanted to touch.

Secondly... another revelation from one of the movie news-feed style sites about 6 months ago said that it would be Neeson and the character of his ex-wife, played again by Famke Janssen, who would be “taken” and it would be the daughter he spent the majority of the first film trying to rescue, who would be rescuing them. Nothing against the actress Maggie Grace (who readers may remember from Lost but, if not, then the over the top, but quite cool with it, Lockout, reviewed here) but, frankly, there’s no way the character as portrayed by her in the first film could do that here without compromising everything we know about that character and her abilities. However, while this rumour turned out to be totally true... I’m happy to say that they found a way of doing it while still retaining the “weak, spoiled brattishness” of the original character.

Thirdly... I saw the trailer.

It was awful. It’s too long and it doesn’t sell the film... especially since it gives away the story and, frankly, the story is the big problem with this movie. It feels unbelievably contrived, all to just get the name of the first picture into the title of the second... and that’s because it is contrived.

Fourthly... I’d heard there were some really bad reviews about this one on TV, radio and twitter shout outs... and I kind of believed them.

So, when I got to the cinema I wasn’t exactly expecting to have a good time. Actually, though, as a non-stop action movie... it’s not a bad way to spend an hour and a half. Although the story really is badly handled... concerning a group of older thugs who are the fathers, uncles, cousins and brothers of a load of people Neeson’s character Brian tortured and killed his way through in the first movie to get his daughter back. This lot are out for revenge so when Brian goes on holiday with his daughter and ex-wife (with the obvious subtext that she won’t be his ex for much longer but become part of a family unit again), the old geezah running the show is out to kidnap and torture the lot of them.  They get Brian and his wife but lose the daughter and Brian gains access to cell phone communication while in captivity long enough to get his daughter to find him and get a gun to him (just in the nick of time for him to shoot her own would be killer)... but then he carelessly loses the wife again and, after dumping his daughter at the American Embassy, he tracks the people who survived his initial escape and kills all of them too... rescuing his wife in the process.

It’s actually not, to this untrained observer, a good structure to have as a script for this type of film. Even Kurosawa would show the audience a straight line to map out the action and then follow on through the basic outline to give a film a straight A to B feeling. This is not the only way to go with your story, obviously... but since it’s dealing with just a few incidents, this story for Taken 2 did feel like it kinda derailed itself and then reacted to new information halfway through. It’s like the climax came about two thirds of the way through... and then the film started a new act and climax which felt kinda tacked on and redundant. Would have liked a less messier way of having the same events occurring than the framework this one was hung onto, to be honest. it leaves you feeling a little unsatisfied.

However, what does work in this one, even if some of the events surrounding the characters still feels a little too concocted for convenience in their back story (as in the ex-wife having trouble with her new husband and separating so she’s free to get all doughy eyed over Brian again), is that the characters all feel like the people they were in the first one. I’d heard a criticism that this film didn’t feel like it was a Taken movie (whatever that is) and I’d disagree. I think all the characters, and actors for that matter, were faithful to their origins in the first movie and so this does genuinely feel like it’s another installment in the franchise... a weak installment, but certainly a continuation nonetheless.

Similarly, the action scenes are all as fast and furious as they were in the original and feel like they are coming from the same place. However, and this is where it gets truly annoying, the UK version of the film has had cuts made, at the suggestion of the BBFC, so the studios can keep it down to a 12A rating and get more kiddies in. Now I did know this before I saw it but, since this particular cinema trip was pretty much window shopping until the opportunity to buy an uncut version on DVD occurs (be it from France, America or possibly the UK), I relaxed my rules about seeing something cut because I didn’t want to buy this one without trying if it was awful, and since it all goes on a Cineworld Unlimited card anyway. How much of a difference could it make, I thought to myself.

Well, unfortunately, the answer to the last question is... a lot.

The editing in the fight sequences seems even more aggressive and choppy than it actually really is, is my guess, because for about half the people who Mr. Neeson sent to their final oblivion, I couldn’t even figure out how they had been killed. Were they stabbed, garrotted, strangled, shot, had their necks broken? I don’t know. One minute they were fighting and the next they were kind of laying on the floor dead... the victim of another annoying, senseless and careless censorship edit. I’m pretty sure in one fight, even, Mr. Neeson was hammering away at two guys, he kills one and then he has no opponent left... lost in the final UK cut. This is something to note then, please, film censors and studios who stupidly collaborate with them... if you keep showing acts of violence with no real consequence other than people laying around on the floor afterwards... then you will be sending a very seductive message to impressionable people throughout the land watching this stuff. People will start imitating it... after all, stuff like this doesn’t really hurt, does it? Yes, it bloody well does and censors need to let these things be seen to serve as warnings of the fragility of the human body and to help prevent the kiddies from... you know... trying this at home.

Okay, so censorship rant over with... Taken 2 is certainly not the film that it’s predecessor is, that’s for sure. However, fans of the first movie and action fans in general should still have an okay time with this movie. In fact, a friend of mine mentioned today that he’d seen it this weekend and really liked it, even though he’d not seen the first movie. So I don’t think a great deal of people are going to have too much of a problem with it... and judging from the money it took this weekend, I doubt very much if the studio cares whether they did or not. Expect a third outing a few years down the line is my guess... although I don’t know who’ll have to get “taken” in the next one... maybe the president?