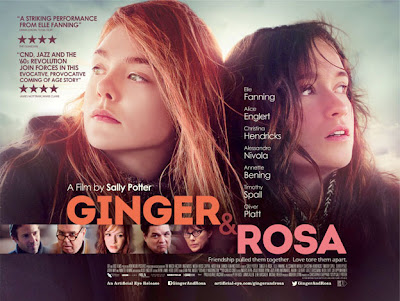 Sally Potter And
The Goblet Of Ire

There’s no real reason why I’ve kept clear of Potter’s work since then... I liked Orlando well enough, although the score seemed to be in some places, almost “fake Nyman”, it’s just that she’s never really been a blip on my radar with any of her work since her debut. A brief glance at her filmography on the International Movie Database informs me that I haven’t been particularly staying out of her way on purpose... it’s just that she’s made only five features, including this one, so I’m not going to blame myself for this. Even if she is known for being a woman of some substance when it comes to making films and also, I would personally like to add to that, seeing her smallish “quality not quantity” output... perhaps the female equivalent of Stanley Kubrik when it comes to getting exactly what she wants on screen. Although, of course, Stanley would never have been able to actually shoot the thing in 5 weeks, as this one was... something she revealed in the Q&A after the premiere.

What I’m trying to say here is this... I’ve not seen Orlando since it came out at the cinema and I don’t know this lady’s work so well, so if there are any stylistic similarities between her new movie and any other of her works... well, I’m sorry, but I won’t be able to point them out to you.

What I can point out to you, however, is that this is a particularly well made and gripping film. Telling the story of two young girls in their adolescence who were born on the same day around the time of the Hiroshima bombing, quite literally one bed apart from each other, the film then takes us straight to 1963, where the move stays to weave a tale of the two inseperable girls of the two mothers who were also inseperable in their hospital beds when they had them.

The backdrop of the film is the CND marches of the time, with the threat of the Cuban Missile Crisis heightening the anxiety of the characters who inhabit this world of the early sixties, as it would have done to the director herself, growing up as a teenager around this time. Some people at the screening seemed to have jumped on this and assumed the film was actually about that... but of course it’s not. It’s a very personal film for the director, I would guess, and she uses these events and emotions to push the boundaries of her fiction and allow her to explore the relationship between the two girls, played absolutely brilliantly by Elle Fanning and Alice Englert (as Ginger and Rosa respectively) and the gamut of their trials and tribulations (and even betrayal) as the two girls react to their loved ones, in particular Ginger’s father (as played by Alessandro Nivola, who reminded me a lot of Daniel Day Lewis’ performance in The Unbearable Lightness Of Being in this role).

I don’t want to give away too much about the way this story goes but I will say that, while the title and relationship of the girls is very strong and would suggest a more even approach to the way the girls experience this period of their adolescence, it is actually Ginger who takes centre stage, as she is the one who seems to be going through the most traumatic time.

The two actresses do an excellent job and they are similarly aided by Christina Hendricks as Ginger’s mother (I have to say the only thing I remember her from was the two episodes of Firefly when she played Saffron... but she’s still the beautiful creature she was in that show and doesn’t look old enough to be playing anybody’s mother) and some very well known thesps such as Oliver Platt, Timothy Spall and, particularly, Annette Benign, who I can honestly say I’ve never really liked all that much but who absolutely shines in the role she is given in this movie. Good job, lady!

The soundtrack is interesting, using an ecclectic batch of needledrop pieces which reflect the conflicting styles of current hits of the time with jazz standards which represent Ginger’s dad and his particular lifestyle choices. I noticed an article in Sight and Sound magazine just recently referred to the film's soundtrack as being absolutely non-diegitc, but that’s actually not true. I noticed that there were a few scenes where the songs from the previous scene’s on-screen source were continuing well into another shot which wouldn’t support that particular source... so it’s definitely not, strictly, non-diegetic. It’s not particularly unusual and I’m surprised the reviewer didn’t pick up on that. There are lots of films that use this technique, of a piece of source music transforming into background music, but only a handful, that I can think of, where diegetic cues are then transformed into music which is non-diegetic in nature. Off the top of my head... the long tracking shot preamble around the rooftop in Dario Argento’s Tenebrae and the opening pre-credits sequence of Luc Besson’s Subway (if I’m remembering that second movie’s opening correctly... it’s been a few decades since I saw it).

The movie is absolutely riveting, the first 20 minutes or so especially fast paced and building speedy momentum as it goes. The camerawork seemed, to me, to be mostly (if not totally) handheld, even in some of the scenes which at first appeared to be static, and I guess if you’re on-board with a five week shoot, you have to sacrifice something in the mix to get the film shot? What that does do, of course, is allow the director to really focus on the actors and I would say she really gets great performances out of the people in this movie. I can’t say enough of how good the two leads are either. Both come from families who are no stranger to showbusiness... Elle Fanning is the younger sister of Dakota Fanning and Alice Englert is the daughter of famous director Jane Campion. So no wonder they acquit themselves so brilliantly here... I’m guessing it’s in the blood.

All in all, a quite serious film, dealing with characters at an age when everything seems so traumatic but also capturing the sense of naiveté that makes it so. It’s not something I’d watch again for entertainment purposes, but I will say that it’s definitely worth a look once, if even to see how well Potter throws her camera around... so to speak. A definite recommendation on a wonderful, quite enchanting piece of film-making. Enjoy.
Posted by NUTS4R2 at 18:11