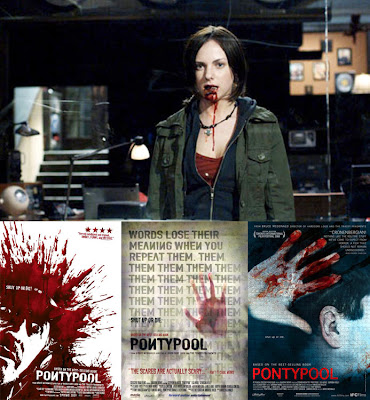 I hate when this happens.

I’ve had an idea in my head for a short story for the best part of 15 or 20 years which I’ve never had the time to research properly so I could actually sit down and write it. The short was going to be sci-fi, in the style of something very British like Wyndham’s The Midwych Cuckoos or The Day Of The Triffids, with a little H. P. Lovecraft thrown in for good measure. It was to have been about a man who gets sent to an English village cut off from the rest of the world, inside a 'safe suit'. He has to find out why everybody has died. Soon he finds, from diary extracts and local new articles, that the village has been wiped out by a virus, The Alliteration Bug which first takes away a persons ability to string standard sentences together and then sends them onto madness and death. The virus is caught by words and uses the sense of words as a host. And I was kinda looking forward to writing that some day.

The other day I heard about a little horror film called Pontypool, and so it looks like I’ll never get to write “my version” of that story anymore. Pontypool has none of the same trappings as my original idea, but it does share the same basic plot device of a lethal virus hiding itself in the language and it uses it to give us more of a horror movie than a purely science fiction story. A variant of the zombie horror genre, no less. But when I say ‘zombie horror’, what I really mean to say, in the case of Pontypool, is that it’s a taut genre thriller which all too quickly engulfs you in it’s little world and grips you like most zombie movies just don’t.

The movie tells of one of the first nights of a Radio DJ,  Grant Mazzie (played by Stephen McHattie, who was so chilling in Cronenberg’s A History Of Violence) on a new job. He’s been fired from his previous DJ job for being too... I don’t know... truthful, offensive, unafraid to call things like they are? Anyway, this is one of his first nights broadcasting from a radio studio in the small, Canadian town of Pontypool, where he has been able to get a job.

He has with him his new producer, called Sydney Briar (who is played by Lisa Houle), and their young assistant who has previously been in a war zone, Laurel-Ann Drummond (played by a lovely young lady called Georgina Reilly). That’s the majority of the cast for most of the running time right there because that’s all the staff who are needed to run the radio show... and this whole movie, apart from the opening few minutes, takes place in that radio studio and a couple of rooms leading from it. You get some visitors to the studio in a couple of places and a few voice cast as part of the show... but that’s about it.

And it just works so well.

Those first few minutes start with Mazzie’s voice from a previous show and after he’s been talking to somebody on a phone in his car, there is a tap on his car window. A woman stands out there in the snow looking distressed. He winds down his window and says something to her and she starts repeating his words (along with some others off-screen) and then runs off. This incident becomes the basis for his first on-air radio question of the day (Should he have dialled 911 about the mystery lady or not?) and, as you may guess, it becomes the radio show of all radio shows.

I remember when I was a kid and I wasn’t completely aware of the diffference between a live broadcast and a recording on vinyl that’s done with conviction. My dad had borrowed a record album of the notorious Orson Welles broadcast of War Of The Worlds from the local library and put it on for me (I guess this was possibly my first exposure to Bernard Herrmann, who played the dance music conductor)... it didn’t take long before I was terrified.

Pontypool, a little research has told me, was also done as a radio play and was also based on a novel, Pontypool Changes Everything, by the guy who worked on adapting both the play and the film (he also turns up as a character’s voice on the radio in the movie). His name is Tony Burgess, but I don’t think it’s the same guy as famous writer Anthony Burgess, as it happens. I’m going to have to read the book and I would love to get an opportunity to hear the radio play too because, it really is no surprise to me that this works so well in that format, because this is how the film works, also. It took me straight back to that old Orson Welle’s broadcast, in my head.

It would be untrue to say there’s no goriness in Pontypool... it touts itself as a zombie movie (although it’s not quite that, in the strictest sense) so it kinda raises expectations in those areas, but for around two thirds of it, I’d say, the events and situations are all done through words... news flashes and interviews by Grant Mazzie as he and his crew realise the full horror of the “protests” erupting in the streets, with their groups of people chanting mundane sentences. Once the horror is finally brought home to them... and I mean brought home... they even use this symptom of groups of people repeating phrases and variants over and over to themselves to send a message to the outside world, by use of a key phrase. This key phrase is looped over the outside radio speakers throughout much of the last 20 minutes of the movie and will probably get under your skins after you’ve heard it the first 100 times or so.

There’s a beautiful scene featuring a group of singers who turn up for an interview when you suddenly realise the virus is not just in the outside world anymore, but it takes a little while longer for the characters to catch up and there’s another drawn out little piece where one of the three main characters becomes infected and, for a little while there, just freezes and emits something like a high pitched test signal... this kinda made me think a little because, well... for the last few years, every now and again, instead of just snoring in my sleep (which I’ve been told by various girlfriends I do) I have occasionally woken myself up because I have been yelling a flat, low pitched, almost continuous “Arrrrrrrrrrrrrr” sound, while asleep. It’s not so bad again now but there was one period about a year ago when I was doing this once a week or more. What with all the recent talk that scientists believe they have found evidence the universe is just somebody else’s computer simulation... well it made me think.

Back to the movie. By the point that one of the main three characters has become infected, a doctor... who may or may not have inadvertently caused this whole thing, I don’t think even he knows... enters the studio and tells the others to stay out of the “language virus” infected character’s way. They lock themselves in the recording booth as she runs around. “She doesn’t realise it yet, “ says the doctor, “but she’s hunting us.” This hunt gets quite grim as time wears on and the ultimate pay off to this scene is something quite cinematically gory... but i just don’t want to spoil this for you. You need to experience it.

The ending takes the film to the ultimate kind of ending that a movie like that could get, but still manages to keep going on with the story all the way through the end credits and then, with a bizarre piece after the credits, which seems to bear no relation to anything we’ve just seen. But that’s okay, I was so drawn in by the main text of the movie that I’m really not going to worry about what the heck the prologue may or may not mean.

Pontypool is both brilliant and, in some places, quite funny. All the performances are, frankly, astonishing and the cinematography doesn’t get in the way of the direct “now” factor of a script which is definitely text orientated, rather than being overly visually resplendent. But that doesn’t matter a bit. I can’t say enough good things to recommend this one to you. Anybody even remotely interested in these kinds of genre movies should have a thoroughly mesmerising time watching this movie. In fact, in regards to the issue of language as a viral host, one might even go on to go to say what say what kill kill kiss is kill is kiss is kill is kiss is kill me kill me kill me darling...
Posted by NUTS4R2 at 19:15