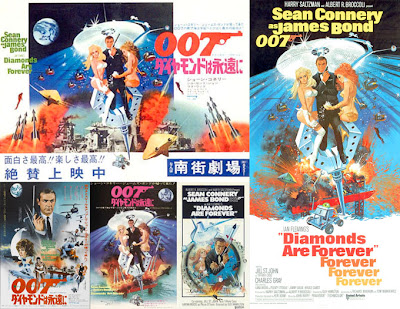 Of Ice And Men

Okay... so despite the previous film, On Her Majesty’s Secret Service, being the all time, drop dead, greatest Bond movie ever made... it did poorly at the box office and through one reason or another, and there are a few conflicting reports as to why, neither the director/editor Peter Hunt, nor the previous film’s Bond (George Lazenby) returned to the franchise again... although Lazenby did briefly recreate his Bond role for the 1983 TV special The Return Of The Man From U.N.C.L.E (the U.N.C.L.E series already had ties to Ian Fleming and Bond, of course, as highlighted in my review of Goldfinger here).

The next film, Diamonds Are Forever, sees Guy Hamilton, the director of Goldfinger, return to the series and, as I’ve said before, it’s my least favourite of the EON produced Connery films in the series, although I have to say I enjoyed it rather more with this latest viewing than with any of my previous times. Having said that, though, I believe I really liked it when I was about 6 years old and saw it in a double bill at the cinema with another Bond movie. For some reason the ending always stuck in my mind, where gay killers Wyntt and Kidd, as played by Bruce Glover and Putter Smith, return at the end to kill Bond and instead, find themselves in a heap of trouble (Glover is the father of Crispin Glover, of course, and you can really see the family resemblance).

This film has a few nice moments including a start that follows on directly from the previous movie... but fails big time at maintaining that continuity by having the main protagonist and antagonist played by different actors... Sean Connery returning to the role of Bond for one more film and Charles Gray, who played Henderson in You Only Live Twice, playing Blofeld and, in the process, managing to look nothing like Blofeld... so I don’t know how that was supposed to work.

Although it’s my least favourite EON Connery Bond movie, he does seem rather more enthusiastic in the role once more (unlike his sluggish performance in his previous Bond film, You Only Live Twice. In fact, right from the hard hitting revenge mission of this film’s roving pre-credits sequence, Bond seems to have been written just a little bit more vicious and uncompromising than he had been in the previous films... including a sexist, more misogynistic  undertone to the character that some audiences will be less tolerant of. However, that does all work in favour of the Bond personality (while perhaps getting a little more away from the books than he should have) and this kind of hard, damaged edge to the character helps you believe in him a little more as a man of action, someone who really could kill someone and not give a damn about it, than some of his previous films, and certainly more so than a couple of his later “actor incarnations” would be able to do.

I seem to remember the money ran out big time in the middle of production of this movie and stories such as the ending having been more elaborate but then cheapened down to, what seems to me to be, a somewhat muddled finale on an oil rig and the fact that Broccoli got a huge load of interiors loaned to him by his “old pal” Howard Hughes (already a recluse at the time) tend to take on somewhat legendary proportions among followers of Bond on film. The shoot can’t have been that fun either as there are some definite “fixes” in the edit and also, during the car chase scenes, you will see crowds of people all cordoned off on the streets to watch the action... not good.

However, you do have a superb cast including Jill St. John as the appropriately named Tiffany Case and Bruce Cabot, Hollywood veteran of such classic films as The Most Dangerous Game (aka The Hounds Of Zaroff), the original King Kong and its sequel, Son Of Kong. It also originally had a little scene featuring Sammy Davis Jr and I have no idea why the producers felt it right to cut that scene out. Surely his name on the marquee would have got more people to feed the box office? The scene still survives and is included as an extra in pretty much every DVD and BluRay edition of the film that’s been out, as far as I know. Famous UK based American actors Ed Bishop and Shane Rimmer, who seem to have become regulars in the series in a small way, are also on hand for people who like to play “spot the return actors in minor roles”.

All in all it’s not a terrible movie and the John Barry score to this one is an absolute gem. For years I remembered it as his weakest score for the series, based on my experiences with first the vinyl LP record of the score (which was used big time, along with the LP of Shafts Big Score, needle dropped onto the soundtrack of the Turkish superhero team up movie, Captain America and Santo vs. Spider-Man) and then from the original CD release. However, contrary to what those original score releases would have you believe, it is a fantastic musical achievement and further evidence of that can be found on the expanded re-release edition of a few years back. This is now definitely one of my favourite albums in the series (you can programme out some of the muzak from the earlier incarnation if you are so inclined) with the Wyntt and Kidd leitmotif in particular, standing out as a solid Barry classic.

If you are a long term fan of the Bond series then you should have a little fun with this one and there is enough in it, including a wonderful portrayal of Howard Hughes, renamed Willard Whyte, by actor Jimmy Dean (no, not that one!), to keep you amused and having a good time. You can even play spot the director in a few scenes. However, if Bond is not your thing and you haven’t seen one before, I really wouldn’t recommend you start off on this one... it just doesn’t hold up as well as the other EON produced Connery vehicles, I’m afraid.

Dr. No
From Russia With Love
Goldfinger
Thunderball
You Only Live Twice
On Her Majesty’s Secret Service
Diamonds Are Forever
Live And Let Die
The Man With The Golden Gun
The Spy Who Loved Me
Moonraker
For Your Eyes Only
Octopussy
A View To A Kill
The LIving Daylights
Licence To Kill
GoldenEye
Tomorrow Never Dies
The World Is Not Enough
Die Another Day
Casino Royale
Quantum Of Solace
Skyfall
S.P.E.C.T.R.E
Posted by NUTS4R2 at 15:55