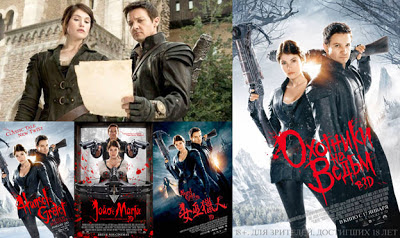 So now we have the big gingerbread house of a movie that is Hansel & Gretel: Witch Hunters. It’s an intriguing concept, in that it’s something I’ve not expected to see in terms of using a source material to inspire a gung-ho action flick and the writer/director’s certainly taken a good stab at doing something which is almost as irresistible as the succulent confection of a witches abode that features so heavily in the source fairy tale (and also at certain points in the movie). It’s certainly a lot of fun, that’s for sure.

There are also a few problems with it which I’ll also highlight a little as I go through my personal witch hunting experience.

If you don’t already know, this film is a kick-ass action movie in much the same camp as the badly received Stephen Sommers movie Van Helsing, from almost a decade ago. This may be, I suppose why a lot of people don't seem to be that turned on about going to see it... which is a shame because it’s got some nice things to offer. Now, I happen to have really loved the Van Helsing movie so, when I saw the trailers for this film featuring crossbows, gatling guns, flying witchery, Famke Jannsen, Jeremy Renner (who I like a lot as an action hero, ever since I first became aware of him in 28 Weeks Later) and, as the lovely icing on an already rich cake, the fantastic UK actress/glamour puss phenomenon who is Gemma Arterton... I was already kinda full on gagging to see this particular movie.

The film starts off with a pre-credits recap of the fairy tale version of the story (or “a” version of the story) for people who don’t know it, which neatly leads onto an ultimately expected but still nice little revelation about the main protagonists later on in the movie. It’s a pretty cool sequence and, the young girl in particular, looks very much like Gemma Arterton, who she grows up to be while the opening credits sequence plays out. This particular title sequence is a real masterpiece in itself (especially in 3D) with “newspaper” articles which trace the path of the two witch hunters as they grow up and make a name for themselves in the... ahem... “Witch Hunters For Hire” business. The nature of the illustrative drawings used and the way they are presented in 3D make them almost look like those old, Victorian, Pollock’s Toy Theatre cutouts (black and white for a penny, colour for tuppence) and this helps lend a certain sense of larger than life theatricality to the proceedings as we then plunge into a “witch trial” which is stopped by the title characters in their grown up form.

These characters are quick and easy to be established through some verbal and physical shorthand and then the basic plot (and it is pretty basic, it has to be said, though there’s nothing wrong with that) is out of the way and everyone can get on with the witch hunting and general “beating-upness” of the movie in some set pieces which are half way between dazzling and, unfortunately, bewildering. Yes, this movie suffers from some confusing editing during the action sequences, it’s true, but I’m hoping when (and that is a when, not an if) I watch this movie again, on DVD, some of the - fight/chase/run/fight a bit more - sequences will make more sense. To be fair, it might have been that my brain was trying to cope with all the 3D effects and, in tight juxtaposition with a fast action sequence, I was just not processing the information fast enough.

There are some nice supporting characters in the shape of Hansel’s red headed love interest played by the very beautiful Pihla Viitala and also “Hansel & Gretel’s biggest fan”, played by Thomas Mann (who turns in a really likeable performance and who is not to be confused with the German geezah who wrote Death In Venice). The film also features Peter Stormare in a minor villain role but, although he is more than worthy of the character, he never really gets the chance to let rip with his particular kind of craziness and I think this is a case of the specific casting choice raising this viewers expectations of the character via the baggage of his previous roles... which is a shame but, hey, he’s still excellent and credible in it, so I need to temper my expectations a little, maybe.

There’s some nice business with a troll character that I really liked and he really drives home one of the things that I’d kind of subconsciously noticed right from the outset but which was then pushed to the front of my mind when I watched the first big sequence with this character... this film is not for little kids. It’s violent, for sure, but I was kind of expecting it to be the Marvel comic book style of turning violence into a bloodless ballet, which the majority of large budget films over the last decade or so have been guilty of, primarily because of censorship issues and the fears said censorship would have on the box office. This, however, is quite gory all the way through, with loads of decapitation, head pulping, bodies torn apart, bodies exploding and, you know, all the gory stuff. It wasn’t until after I’d seen the movie, when I looked up the director to write this review, that I realised it was written and directed by the same guy who wrote and directed Dead Snow (aka Dod Sno), the excellent, tongue in cheek nazi-zombie movie which was on everyone’s radar a few years ago. This explains a lot. I certainly can’t say I prefer Hansel and Gretel: Witch Hunters over Dead Snow (which I loved) but now i understand why this movie was refreshingly, for the kind of movie it is, blessed with a penchant for gory bloodletting when it could so easily have bypassed that aspect of the production.

I also think there may have been script issues along the way too... which is a shame. There are some nice details and little character props put in the film and one of these is the fact that, due to Hansel’s childhood experience at the original witch’s gingerbread lair, he has to inject himself with a substance every couple of hours or die... which could have made for a suspenseful scene towards the end of the picture but, alas, all references to this facet of the character seem to fly out of the window by the end of the movie and he goes for long stretches of time without even once “pulling out his plunger” after a certain point. There’s one scene which may explain the reasons for this in terms of story logic, except if that is what was going on, it wasn’t made implicit enough, for me at least, to register. What I think, is more likely, is that the film was originally a much longer cut and the sequences explaining just what is going on in relation to this story element were lost in the edit somewhere along the line. Personally I’d like to see a longer version of this movie where stuff like this is addressed at some point in my near future. Oh well... maybe with the blu-ray.

Another script issue might be the language, which seemed a bit too modern in a lot of places... specifically when it came to the use of swear words in whatever the time period of this film is supposed to be covering. I remember reading an article when I was a kid about “controlled anachronism” in the context of fantasy fiction but, frankly, there’s a lot of reference to “those f*cking witches” throughout the film and this did seem to lessen the credibility of the central characters somewhat... I would have personally gone with a more antiquated set of swear words to run through the film but, all in all, it doesn’t really spoil the movie too much and the pacing is such that you never really have too much time to think about it before being yanked into the next set piece.

So, in essence, what we have here is a movie which is a rollicking action fest, if that’s your thing, and has some pretty cool actors playing some characters with a fair bit of heart and depth (although, it is a shorthand sketchy kind of depth, to be sure) tearing through an adult fairy tale at a fairly fast pace with a good amount of gore thrown into the mix. Some nice scoring, too, in the few places you can actually hear it properly (it does tend to get buried in the mix in places) which I’m looking forward to grabbing for a “stand alone” listen when it gets released towards the end of next month.

This is not the best action movie going, by a long shot, but it is trying something new and it is, by and large, a fairly enjoyable romp in the cinema if you’ve got nothing else to do one night. I’d recommend it to most people but don't go into it with really high expectations... this director is in better form with nazi zombies than he is with twisted fairy tales.