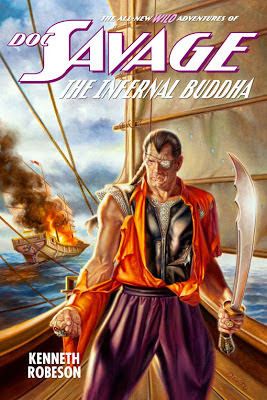 Warning: There are some spoilers in this review. Sorry.

So here we have the third of Will Murray’s second batch of Doc Savage novels (also reviewed here and here), following on from the batch he wrote in the early 1990s. Once again it’s a tale of high adventure using some of the characters we’re all familiar with from the original Lester Dent stories of the 1930s and onwards and, as usual with this guys work on the series, it’s got a lot going for it and Murray proves himself a more than worthy successor to the legacy of Street and Smith Publications' house name Kenneth Robeson.

This novel is a bit of a curious one in what you are actually getting, in terms of maybe a little more deviation from the formula than you might be comfortable with... although I think in this case, when respectfully done, it refreshes and updates, in the most positive way, the franchise for a new generation of readers (much like what Russel T. Davies did with Doctor Who a few years back). Different from the usual formula in that, while it all locks together as a single story, the structure of this one is such that it’s almost like it’s split into two different mini adventures. If I were any kind of football fan I might say it’s definitely a novel of two halves... but I’m not so I’ll try to make myself a little clearer.

The story involves a bunch of pirates headed by the first main villain of the piece, who comes into possession of an artefact called the Buddha’s Toe... which is about as dangerous a weapon as you’re going to get. Something happens when you open the box that houses the Buddha’s Toe, in that everything from the area in front of the box is dried up and made devoid of moisture, including people who quickly mummify up and die in seconds if they’re not beating a very hasty retreat. Doc Savage becomes embroiled in the affair and he obviously makes it his business to get the toe out of the hands of the murdering pirates who would possess it for themselves and unleash a deadly force which could destroy the world without even knowing what they are doing... and this he achieves in the first half of the book... the lead pirate mummifying to death in the power struggle which takes place, for the most part, on an island. Then things get more complicated as the Buddha’s Toe is merely a fragment of another artefact with the same properties, only much larger and more threatening.

The second half of the story follows Doc as he poses as a pirate in an attempt to wrest control of the more powerful artefact form the obsessive Japanese destroying Chinese cutthroats who would unleash it’s power in a similarly ignorant attempt to control a force that would be best left outside of their grasp. Things get a bit dicey for Doc and the gang but it all works out in the end... as you can probably guess.

An interesting and, for me, disappointing thing about this novel was that not all of The Amazing Five, Doc’s gang of aides, are present in the story. This is nothing new for the Doc Savage stories, and as the original thrillers used to be absent a number of the five towards the end of the run in 1949, you can’t fault Murray for jettisoning a few characters that he thought might have either been clogging up the action or providing too much of a deux ex machina in their collaboration in this story. So this one just features Monk, Ham and Rennie as Doc’s invaluable aides. I was distraught that Patricia Savage didn’t make the cut in this one either... I always like the stories where Doc’s cousin Pat is present, bronzed amazon adventuress that she is.

What you do get in this one is a more vulnerable Doc who does often find himself in situations which he doesn’t quite know how to handle. Now don’t panic, I know how that’s going to sound to any Savage fan, but you needn’t worry because the character in the original stories did used to have occasional brushes with uncertainty every now and again too. Let’s face it, although people lionise their heroes because of their superhuman, less flawed characteristics... that can sometimes make for a dull story. Instead, Murray gives us a version of Doc who has to rely on his wits just a little more than usual but, like I said, it’s not a bad call and, as long as he doesn’t start doing this in every novel, I personally think it’s acceptable once in a while. Not that he’s writing these for me, of course.

An especially great touch is when Doc loses his metal skull cap. It wasn’t mentioned too much in the original tales, as far as I recall, but it was certainly a part of the character which has always been there right from the beginning. Doc Savage’s fine hair is actually a facsimile of the same hair which sits underneath a metal skullcap, used to deflect bullets if Doc has to go diving head first into a brawl... it’s a stupid but brilliant invention and it's typical of the 1930s culture that spawned it. Like I said, it’s always there but rarely referred to this pointedly in the original series... and here, Murray spotlights it in one scene and uses it to make the hero even more vulnerable in a tight position. Using this stuff as a dramatic device is a good call and it works really well here because long term fans of the series will get another hit of “Savage nostalgia” while it also serves to put the key characters under more pressure. Bravo, Mr. Murray.

My one big complaint, and its a similar one I had when I was reading the denouement of his earlier novel Doc Savage: The Desert Demons (reviewed here), is that although the less than understandable destructive power of the Infernal Buddha is explained away in typical, for the series, scientific manner... the origin of the artefact in question is less explainable and relies on the reader swallowing a possible extraterrestrial origin. I personally think this is less than acceptable in a series that only once (to my knowledge), in its original incarnation, presented the “object of mystery”, as something genuinely unexplainable for Doc... which is something which was saved for his very last adventure, Up From Earth’s Centre, when the pulp magazine was cancelled. So, yeah, I would have preferred a lot more down to earth explanation for the title’s artefact in this story, methinks, but ultimately it didn’t detract too much from a solid adventure yarn, on the whole.

Also, while the cover artwork is another triumph of fantastic painting, I thought the subject matter was a little less in keeping with the spirit of the covers that have come before it over the last 80 years and it also spoils one of the possible surprises in one of the chapters... instead of letting realisation slowly dawn as to the identity of a new character arrival, we just have to remember the front cover illustration. So that could possibly have tipped novice Doc Savage readers off... seasoned readers will have jumped on it anyway as soon as the character appears.

All in all, though, I have to say that I really enjoyed this one and am especially looking forward to the March 80th anniversary story where Doc Savage crosses paths with another famous 1930s icon, King Kong. Can’t wait for that one. The Infernal Buddha is definitely a delight to read, however, and gets a hefty recommendation from me for any fans of the character who are still willing to go along for the ride. Good stuff!
Posted by NUTS4R2 at 20:36