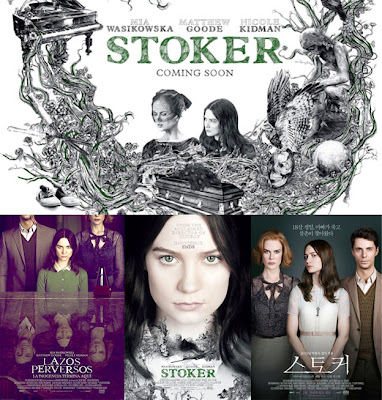 Warning: Very slight spoilers if anyone knows their movie history.

Right then. Here we have famous Korean auteur Chan-wook Park directing a film co-financed between the UK and the US and shooting it in English.

I should, right away though, point out that... out of this particular director’s body of work, the only movies I am familiar with by him are his loosely knitted “vengeance trilogy” and out of those three films, the only one I really enjoyed was Lady Vengeance.

That being said, Stoker is a pretty neat film and my only disappointment stems from the lack of twist or sting in the tail of this one... the whole thing being, I’m afraid, fairly cliché ridden and utterly predictable. However, that’s kinda missing the point with a movie like this and there are a fair few things which raise this past the level of the routine meandering of the story and lift it well into the boundary of “necessary viewing”... the most obvious being the very rich and neat visual imagery on show.

There’s just so much going for it in “the look” and the bright green, yellow and red colouration used in a lot of the shots combined with some very leisurely camera movement and an editing style which is used as metaphor to capture the mood and psychology of the characters when required, makes for a very seductive and addictive piece of film-making. Indeed, a lot of the movie plays without the necessity of character dialogue and the visual richness, not just of the overall mise-en-scene but also of the way shots are rubbed together to create intent and foreshadowing, makes for an almost perfect movie.

Except it isn’t perfect, by any means.

The film does tend to broadcast the overall arc of the film quite blatantly, so perhaps the “silent cinema” mode of some of the sequences were perhaps a little over the top. The movie comes from a lineage which quickly switches from Hitchcock’s Shadow Of A Doubt to a less polluted cinematic legacy which includes movies such as Badlands and Natural Born Killers. Indeed, it could well be considered a less obviously humorous version of Heathers than it could be a lot of other things. And the performances by all the central characters are just superb. Everybody is perfectly framed and delivering lines or going through various actions in a cinematic space which is uncluttered, painterly and gives the performances a lot of room to breathe.

And top marks to Park for coming up with such staggering compositions which still somehow manage to look effortless. One particular shot in the movie has the three main characters sitting down together for dinner and even though the distance between each of the characters is only what can be arranged around a fairly standard sized table, the breadth of depth the director manages to get in by having Nicole Kidman and Mia Wasikowska share two separate planes (and therefore sizes) split up between the back of Matthew Goode’s head in the immediate foreground is absolutely astonishing as you see the three occupying completely different kinds of spaces within the same shot... it just blew me away. Ditto to a couple of other shots right at the end of the movie which were a quite beautiful mix of “blood and nature” which I would have thought almost unique... if I hadn’t already seen more or less the same shots done by Tarantino in Django Unchained (reviewed here) a few months prior to this (no, I don’t know who made their movie first... it’s probably all been done before anyway).

Clint Mansell’s score, too, is pretty good... as are some of the needle-drop choices in this movie. I don’t know if the amazingly sexualised piano duet was his invention or not, but it sounds amazingly like the music of Philip Glass (it’s not) and is making me want to rush out and grab the soundtrack CD as I write this.

My conclusion then, for this movie, is that it’s not as good as Lady Vengeance but certainly the next best of this director’s works... as far as I’ve seen, at any rate. Script, performances and visual poetry aside, the film is perhaps not going to blow you away in terms of originality unless you have not seen a lot of other movies in your lifetime. Ultimately, this isn’t quite the rich “visual feast” I had been lead to expect from this director... it is however, at the least, a very tasty “visual buffet with side salad” and certainly doesn’t deserve to be ignored at the cinema in favour of the loud and clunky Hollywood made movies which are currently on offer at UK cinemas. It’s a well made piece of art and you should take a look at it if you get a chance. Very much a recommendation and something which certainly has a lot to offer in terms of finding interesting ways to convey the inner psychology of the main protagonists and antagonists. Please see it before it goes.