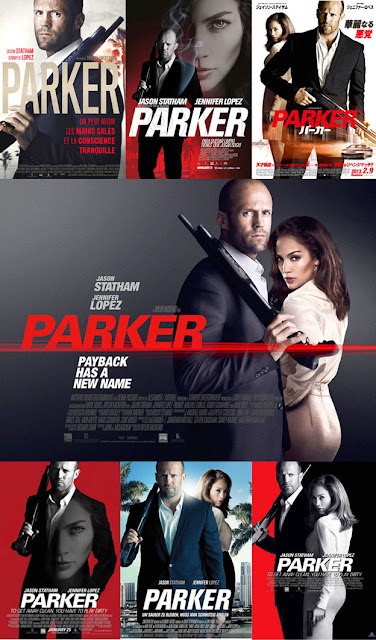 Okay. So here’s an always good trivia question for you. What do actress Anna Karina and actors Lee Marvin, Jim Brown, Robert Duvall, Peter Coyote, Mel Gibson and Jason Statham all have in common?

The answer, of course, is that they’ve all played the title character of this movie here... Parker.

The writer Donald E. Westlake has published numerous novels under both his own name and also many under a string of pseudonyms. Perhaps his most famous pen name is that of writer Richard Stark, the name he used for a long series of novels about an unstoppable, ruthless but principled professional thief named Parker. Stephen King fans take note that the George Stark pseudonym used by the main protagonist of King’s novel The Dark Half, and the unstoppable monster that stalks him, are heavily inspired by Richard Stark and Parker.

And of course, there have been movies too.

Many movies but, and here’s the thing, due to some kind of contractual or other arrangement, in the many previous movies based on his character - Anna Karina in Godard's Made In U.S.A, Lee Marvin in Point Blank, Jim Brown in The Split, Robert Duvall in The Outfit, Peter Coyote in Slayground and Mel Gibson in Payback - none of these characters have been allowed to be called Parker. Which in some ways, I guess, is handy for a studio because, if you’re going to have different people playing him, it doesn’t tie you into any rival companies films (is my guess).

Meanwhile, Donald E. Westlake died back in 2008 and so, here we have the character back on screen once more in an adaptation of the Stark novel Flashfire but, this time, they can get away with calling the character by the handle he goes by in the books, hence, Parker.

Now it’s at this point that I have to confess that I’ve only ever seen one previous Parker movie (so far), Lee Marvin’s outstanding portrayal opposite Angie Dickinson in John Boorman’s mini masterpiece Point Blank. I’ve also only ever read one of the Parker novels too, I'm afraid... The Hunter, on which both Point Blank and Payback were both based, and that was a long time ago, so I guess what I’m telling you is that I’m not one hundred percent able to tell you if the character (and performance of that character by Jason Statham) in this new movie does the source material properly or not.

What I can say though is... it felt right.

When the movie started I wondered if Parker had maybe been softened down a little but, frankly, even though Statham plays the character in a fairly sympathetic light (aka someone you can get behind and cheer), he still carries with him the subtext of being an unstoppable, or at least wildly tenacious, killing machine who will go to the ends of the earth and endure everything for a principal... to get what he, and his, have been promised.

And I have to say I thoroughly enjoyed it.

Now I have to say the direction of this movie in certain areas felt kinda wearing, in as much as I’m blaming the director really for having a say in both how the shots were designed and framed and also, as it happens, how things were edited together. I saw nothing truly joyful in terms of the visual composition all the way through the film, it has to be said. Similarly the editing seemed a bit choppy to me and I was constantly noticing how various actions in a scene were chopped up into various angles when a master shot or tracking shot could have covered things in one hit and... well... if I was noticing all this stuff when I should have just been kicking back and enjoying the movie, then I guess there’s something wrong there. Well, unless the director wanted to deliberately call my attention to that stuff and pretend he’s Godard... but I’m guessing not.


That being said, though, I have to give the director a lot of credit for doing a lot right in this movie. It did suck me in quite a lot and some of the suspense sequences in this movie, and that’s all a big editing thing to pull off too, really were quite effectively suspenseful and it’s not often you get that working in modern thrillers... so that’s a big tick for him right there. I think what we have on our hands is a good work a day director turning in a movie for a studio which is going to do the business because, at the end of the day, it’s a really good little film.

When it comes to Jason Statham, I’m used to him being really excellent, and he proves to be again in this. He’s also ably supported by Jennifer Lopez, who I’ve long known is a really capable and very underrated little actress, it seems to me. All of the performances in this are good with particular nods of the hat to Emma Booth, who plays Parker’s main squeeze Claire and Michael “Ben Grimm The Thing” Chiklis who plays a pretty decent, and therefore fairly nasty, heavy.

The action sequences in this are pretty good too and one fight in particular came across to me as kind of a cross between the train fist-fight between Sean Connery and Robert Shaw in From Russia With Love and the apartment fight with Matt Damon in The Bourne Identity. Jason Statham is known for being able to do some pretty spectacularly choreographed fight scenes but I have to credit the film-makers here for paring that spectacle down and instead going for something far more brutal and earthy. When people start hitting each other they get hurt and the way the violent elements in this one are put together... you really start to feel it (the sound design helps a lot in these sequences too). So I guess what I’m also saying there is that... maybe the action editing was a little better in those kind of fast paced, short duration, sequences of shots than it was in certain other parts of the movie. I don’t know... I’d have to see it again (which I may well do, as it happens).

It’s also pretty well written and although the film is maybe just a little long, and I was kinda distracted by the way certain scenes were being put together and presented to me, that overall I really enjoyed this one and can easily recommend it to lovers of thrillers (it’s not a gung ho action movie... and better for that) and also as a jumping on point to the world of Parker, if you’ve never seen or read any of his adventures before. Richard Stark, that is “Parker’s pen name”, would hopefully approve of this one. Give it a go.