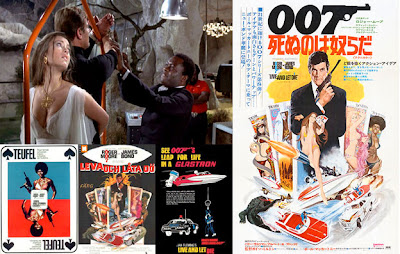 Okay. So let me just go on record here as saying that Roger Moore’s version of Bond in the seven films he made in the series is, along with Daniel Craig, one of my least favourite portrayals of Bond on film ever. He was just, for the most part, a much softer character than I want to see as Bond and that’s all there is to it. It’s not his fault because the character is still quite tough and raw here... I think it’s much more to do with the writing than anything else. By the time he did his third one, The Spy Who Loved Me, it was almost like the character had suffered a complete sea change since the days of Connery and Lazenby and, although there are still a few good things on show in the majority of his movies for EON... I don’t really expect to be giving many of his movies a good review here, truth be told.

That being said, Guy Hamilton’s Live And Let Die will always hold a little place of affection in my heart, and not just because it was the first Bond film I saw at the cinema, at the age of five (followed by a load of screenings of Connery double bills... see my first Bond review for Skyfall here for the full story). The fact is, Live And Let Die, while somewhat different in tone from the previous Bond movies, is actually a great little movie and definitely Moore’s best in the role. A curious mix of blaxploitation movie (which were hitting big at the time) and action-loaded stunt fest, Live And Let Die has a lot going for it.

It also carries on and tries to solve one of those great continuity errors arising from the choice of shooting the novels out of order (as I mentioned in my Dr. No review here). In fact, in that review I said...

“The character of Quarrel, the guide who takes Bond to Crab Quay, was already a recurring character in the books, having played a big part in an earlier book, Live And Let Die. Dr. No is Bond’s second encounter with the character and, in both the book and the film versions, he is burnt to death by the bad guys. However... this obviously left the filmmakers with a slight (it’s a question of taste and respect) problem when it came time to shoot Live And Let Die a decade later. How did they solve that little problem? Well, wait until I review Live And Let Die and I’ll tell you.”

So yeah. This is where I tell you, I guess. In the movie version of Live And Let Die, which obviously in movieland takes place after the events of Dr. No (but way before in the chronology of the books), Bond enlists the aid of Quarrel Jr, the son of the character he encounters in the first movie... although the age difference between father and son and the timeline of the movies makes absolutely no sense. Of course, the bond movies exist in a very surreal timeline and none of the continuity between films makes a heck of a lot of sense anyway, to be honest... Skyfall being one of the worst offenders for that sort of thing in years.

In fact, the film has quite a few quirky facts and figures going for it. A few of those many curios I’ll list here.

Firstly, Live And Let Die features the comical (to the point of irritating, but not when you are a five year old as I was the first time I saw it) antics of Clifton James as the “much imitated in popular culture” Sheriff Pepper... a character who proved to be so popular that he was brought back for the next film in the series, The Man With The Golden Gun.

It also stars David Hedison (who was billed as Al Hedison back when he played the title character in the original version of The Fly) as Felix Leiter. He would go on to reprise the role years later opposite Timothy Dalton’s excellent Bond portrayal in the not-so-great movie License To Kill (a complete failure of a movie and a bit of a franchise killer... or so I’d assumed at the time). Now Hedison was the only actor to play Felix Leiter twice... up until decades later when Jeffrey Wright would also play the character twice opposite Daniel Craig in both Casino Royale and Quantum Of Solace.

More interestingly, though, in terms of both the Felix Leiter character in the books and Hedison’s portrayal of him, is that lots of the source novel for Live And Let Die was not used for the movie version. However, two of the scenes from the book were taken pretty much in tact in terms of emotional intent for two later movies in the series... the boat drag sequence in For Your Eyes Only and also the Felix Leiter “he disagreed with something that ate him” sequence in License To Kill. In the novel of Live And Let Die, Felix Leiter is half eaten by sharks and left for dead... and it was only the second book in the series, following on from Casino Royale! However, the character then starts appearing regularly in the books, with a hook for an arm and fake leg etc. This is the version of Felix, ex-CIA due to his grizzly experience and now working for Pinkertons, who is the regularly appearing character... not the version often portrayed in the movies. It’s therefore quite proper that Hedison, who is great in the role anyway, was called back in to play Felix in another sequence inspired from the original novel’s source for the first movie he played the role in. One of those pleasing bits of serendipitous film history moments which bring a smile with them.

Another interesting bit of casting for the film is the lovely Jane Seymour who plays the fortune teller Solitaire, in the employ of Yaphet Koto’s lead villain. This part had already been signed to actress Gayle Hunnicut, who had to bail on the job due to pregnancy. Something quite bad about this character, however, is that she uses a deck of tarot cards adorned with a snazzy design based on the numbers “007”. What the “bloopity bloop” is that all about? Seriously?

This is also the first film in the sequence not to feature Q. This character had been in it since his first appearance under the character’s actual name, Major Boothroyd, in the first EON production, Dr. No. When the character reappeared in the next film in the sequence, From Russia With Love, Desmond Llewellyn took up the reins and played him in pretty much every film until his death... excluding this one. He would have to wait until the next movie in the series before he could start to develop some on-screen chemistry with Moore’s Bond.

Another first is it’s the first in the sequence not to have ay music composed or arranged by John Barry in it. “Fifth Beatle” George Martin toook on scoring duties on this one (maybe a natural choice after Paul McCartney wrote such a blistering, cool opening title song) and it’s certainly one of the better non-Barry scores in the series.

And that’s about it for this one. Live And Let Die is a fiercely enjoyable action romp... but with not too much of a cold war/spy feel to it. It’s always a laugh and a pleasure to watch and, if you can divorce Roger Moore in your mind from the character he’s supposed to be playing, then his performance is also very watchable. Easily my favourite of the Moore Bonds but I should probably warn you now though that, if you’ve been reading my Bond reviews in chronological order, you may find they get quite a lot shorter and more cursory through the tenure of the Moore films as I just don’t rate them all that much against most of the other movies in the series. If you want to see an entertaining Bond movie with Roger Moore in it, however... pick this one.

Dr. No
From Russia With Love
Goldfinger
Thunderball
You Only Live Twice
On Her Majesty’s Secret Service
Diamonds Are Forever
Live And Let Die
The Man With The Golden Gun
The Spy Who Loved Me
Moonraker
For Your Eyes Only
Octopussy
A View To A Kill
The LIving Daylights
Licence To Kill
GoldenEye
Tomorrow Never Dies
The World Is Not Enough
Die Another Day
Casino Royale
Quantum Of Solace
Skyfall
S.P.E.C.T.R.E
Posted by NUTS4R2 at 20:43