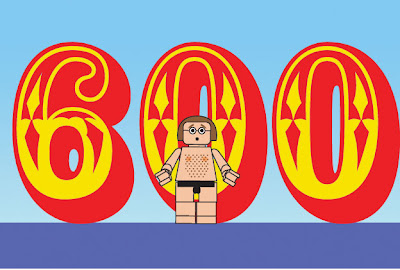 Okay... so that’s 600 posts. Partially because I don’t have much time to do anything else and, partially because I already wrote a painfully honest 3 year anniversary post last week... I figured I’d use this opportunity to go through my blog a bit and pick out eleven of my favourite posts. The ones I’m most proud of so far, for one reason or another. Hope you like. Click on the links to go straight to the reviews...

Attack Of The Crab Monsters - June 2012
http://nuts4r2.blogspot.co.uk/2012/06/attack-of-crab-monsters.html
This is one of my favourite reviews because it was such a great and hugely incompetent movie to discover. I had a whale of a time watching it and laughing at the unintentionally funny parts (which were pretty much the whole darn movie) and I also had a blast responding in kind when I was reviewing it.

Delicacy (La Delicatesse) - April 2012
http://nuts4r2.blogspot.co.uk/2012/04/delicacy-la-delicatesse.html
This one because it’s a) not the kind of movie I usually write about... b) treats love like it’s for grown ups (which it is) instead of derogatising it and turning it into “just” a series of funny incidents and c) because it seemed to have a good response and, like some of my other posts, a little bit of a life after the initial posting.

Doc Savage: The Desert Demons - January 2012
http://nuts4r2.blogspot.co.uk/2012/01/doc-savage-desert-demons.html
I picked out this review, not because of my actual verdict on the novel (which was the least rave review I’ve given to any of Will Murray’s brilliant Doc Savage continuations) but because it’s one of a few early snapshots of myself as a kid captured in this blog which gives the people who I personally know, and who might read my blog, a little more background into me as a human being.

My 300th Blog Post - Faces Of Caroline Munro - August 2011
http://nuts4r2.blogspot.co.uk/2011/08/my-300th-blog-post.html
This will probably always be my favourite post (and also one of my most popular in terms of hits) because the great Caroline Munro herself mentioned how much she liked it at the time on her website. When I presented her with a larger, canvas print of it when she was doing a signing, some months later, she seemed thrilled to bits and it put a smile on my face for a very long time.

Haunting Of Winchester House 3D - February 2011
http://nuts4r2.blogspot.co.uk/2011/02/rifling-secrets-of-winchester.html
My most scathing review of one of the worst movies I’ve ever had the mispleasure to watch. This is really not “bad in a good way” either... but it is probably the most “fun poking” I’ve done on this blog.

Black Belt Jones - August 2010
http://nuts4r2.blogspot.co.uk/2010/08/please-fasten-your-black-belts.html
I liked this one... partially because it was Jim Kelly doing his thing but mostly because I really liked the little Jim Kelly with nunchucks picture I cam up with to illustrate it.

The Final Programme - August 2010
http://nuts4r2.blogspot.co.uk/2010/08/lives-and-times-of-jerry-cornelius.html
Because it’s a film I've absolutely loved since I was a teenager (even though most people haven’t even heard of it) and because one of my writing heroes, Michael Moorcock, was at the screening I reviewed. So it’s a nice little virtual memento for me to look back on.

My 100th Blog post - July 2010
http://nuts4r2.blogspot.co.uk/2010/07/my-100th-blog-click-to-embiggen.html
This comic strip on the birth of my blog and how much writing and promoting it meant to me was also a sly tribute to the, then recently, deceased Harvey Pekar. It meant a lot to me at the time and, well, who doesn’t want to see a picture of me naked? :-)

Claire Dolan - June 2010
http://nuts4r2.blogspot.co.uk/2010/06/katrin-cartlidge-is-claire-dolan.html
Because it reminded me how poorly off we are after the tragic, early death of Katrin Cartlidge and made me cry.

Fellini Vs Fosse: When Cabiria Meets Charity - June 2010
http://nuts4r2.blogspot.co.uk/2010/06/fellini-vs-fosse-when-cabiria-meets.html
This comparison piece between my favourite Fellini movie Nights Of Cabiria and the American musical remake, Sweet Charity, is something I was quite proud of at the time. I’ll always prefer the Fellini but I actually like both takes on the story. It just seemed like a good idea to pit them against each other in an exploration of their intent at the time.

Giallo Fever - June 2010
http://nuts4r2.blogspot.co.uk/2010/06/giallo-fever.html
My defence of the Italian giallo movies as an artform in their own right, and not something to be merely “derogatised” as something reminiscent of the trashy American teenage slasher movies which were informed and influenced by them, is something I wish more reviewers of exploitation movies would read. Art is art... don’t try to defend it with wishy-washy excuses... defend it because it’s a more than valid genre in its own right!

And that’s 600 posts done. I hope you enjoyed my little trip down my recent memory lane and maybe even clicked on one or two of the links to see what an earth I was going on about. Either way, thanks very much for reading. More reviews to follow soon and it’s back to business as usual.
Posted by NUTS4R2 at 17:41