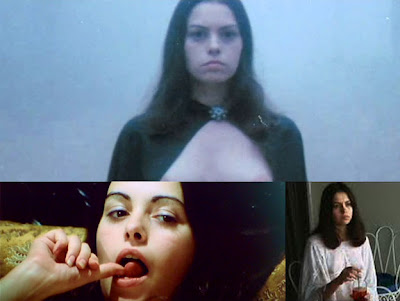 This is one of those eurocinema films you see when you’re young and the imagery stays with you for years... although it’s not exactly the greatest movie ever made. This was one of Lina Romay’s earlier films with the director and of the 120 movies she made before her death last year, the majority of them were made for her lover Franco... taking up “muse duty” after the tragic death of Franco’s equally famous figure of inspiration, Soledad Miranda (perhaps best known for the starring role in two of his movies in particular, Vampyros Lesbos and She Kills In Ecstacy). That Romay was a self confessed exhibitionist meant a match made in heaven for her and Franco and the images of her walking around this film and coming towards the screen out of the fog wearing just a hooded cloak (which manages to reveal everything about her) and a black belt will probably stick in the minds of most red blooded young men who come into contact with this film at an early age.

As a horror film it’s not much good, truth be told, but as a softcore exploitation movie with little dialogue designed to inflame the lusts of all those with a vampire fetish... well it does pretty well on that count (or countess).

The film is very much like the more classic Vampyros Lesbos in many ways, but there’s a lot less going on here and, while this makes use of references to Karlstein’s family (which was probably as close as they could get the more famous vampiric name of Karnstein without having copyright issues, is my guess) and even has references to Franco’s earlier Dr. Orloff movie, this doesn’t share the same kind of substance as Vampyros Lesbos, which could easily pass for a not bad parody of Bram Stoker’s Dracula book (or stage version for that matter).

Still, the film is quite hypnotic and not just for the fact that most of the running time is taken up with female nudity, sex and a touch of badly restored S & M (with still material missing from the original shooting, I suspect, as Romay’s character is pre-wounded before we get to the main body of those scenes). Although I imagine the budget for this movie wasn’t what Franco would have wanted, it seems that the inspiration behind some of the shot designs are every bit as thoughtful as some of his other classic works. It’s just that there are vague distractions when a hand held camera is used, for instance, when you suspect the director would rather have used a proper tracking shot for certain sequences. Still, you can still make out the intentions behind the shots and a lot of it is very good.

You also have present Franco himself, as a kind of light weight/minor inconvenience Van Helsing type character, and it’s far from unusual for Franco to save money on his productions by casting himself. One story tells of him shooting himself in close up on a shot for a movie once while operating the camera himself (reaching around it) at the same time.

The scoring is pretty decent, although Daniel White’s music is less funky than some of the stuff you might equate with this director. There really does need to be a proper soundtrack CD of this score sometime... it’s really quite infectious and captivating.

So... a brilliant movie of little consequence, although I have to say that the Redemption BluRay I have here surprised me a little in that something seems amiss in terms of quality. I can’t work out if it’s the original source print that the BluRay has been mastered from that’s just absolutely crap in places (especially the opening sequence of Romay emerging from the fog in a forest) or if it’s the actual transfer that’s at fault and, while I’m pleased to have this version and it’s extras, I have older films which look a whole lot better than this on my BluRay and so I did wonder if I’d have been better not purchasing and sticking to my old Region 1 DVD edition from Image Entertainment. I’m fairly new to BluRay so maybe I should start being a bit more discerning when it comes to trusting who is doing what and from which available materials they are doing their “what” with in future.

Anyway, this doesn’t effect the slow burn, cumulative quality of the film any and, if you’re a fan of gratuitous nudity and beautiful women with a touch of somewhat pretentious vampiric angst thrown into the mix and some fairly questionable acting from Lina Romay on this one, then you’re probably going to be able to watch this movie on its own terms for what it is. For novices into the world of Jess Franco, too, I would say this is worth a look, although it’s not quite in the league of such works as Vampyros Lesbos, She Killed In Ecstacy and Countess Perverse (reviewed here). The iconic imagery, however, should pull you in a bit and make you seek out some of this man’s other works. If you do that, let me know what you think.