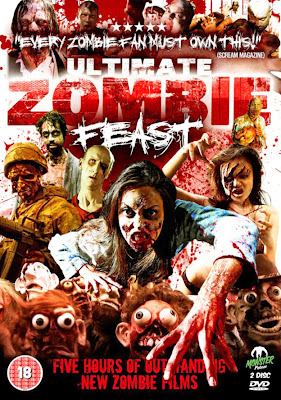 I’d forgotten I’d bought this collection on its release, at the tale end of last year, specifically so I could review it on this blog. My reacquaintance with the short form, low budget arm of the arts is slowly getting reappraised the more I see. However, as you’d expect, this collection is a little hit and miss, both on professional production values and on entertainment. Touted on the back of the DVD as “more than five hours of outstanding new zombie films from around the world”, this compilation of low budget celebrations of the undead certainly didn’t fail to keep me engaged, in places... but if this is really the cream of the crop in terms of the use of the word “outstanding”... then there must be some really dire films being made out of there. Which is probably true because I understand that zombie movies are the easiest and cheapest kinds of movies to make... so everyone and their lifeless zombie ghoul of a dog is out shooting them.

Here then, are my quick little capsule reviews of the 16 films, spread across the two discs of this release.

Zombeer
This one takes the same kind of tone as two thirds of the shorts on this disc... in that it’s playing the genre for laughs. It’s slickly shot, however, with lovely colours and a post credits blink and you'll miss it reference to Kurosawa's Yojimbo, so the director scored a point with me for that. Inconsequential, like many on this disc, but fun. There is, though, a terribly flawed sense of logic when it comes to the origins of the zombie outbreak and, as almost all feature films made in this sub-genre, the majority of the rest of the movies after this don’t even try to explain the causes.

Zombies and Cigarettes
A fast paced Spanish action zombie flick which homages George A. Romero in at least as much as it’s set in a shopping mall. There’s a real understanding of how the language of cinema can best be used and it’s especially noticeable in a neat moment which pitches one extreme of sound against dead calm. Annoying, badly translated subtitles don’t do this movie any favours though. Would have thought the DVD company would have taken care of that for them.

Plague
This is the first serious movie without any humour in the collection. Impressive use of shot design and editing combined to make a few people seem like hordes of zombies and, simple as the solutions used are, it’s something a lot of the other movies here could have learned from. It also takes time to build up the main protagonist as a character for you to invest in, which is a bit of a plus.

Bitten
This is a five minute character study of a woman who has survived an unseen zombie attack, but who has been bitten. Our camera eye observes her as she tries to come to terms with the fact that she is turning, little by little, into a zombie. Fairly intense if you can get past some of the make up choices and over the top acting moments.

Arise
Not the best on the compilation. Set in a factory, it's a straight "bug hunt" of a movie once the zombie virus hits. Some of the acting is okay though but the wig worn by the Jason Mewes clone in one scene in this is laughable.

Not Even Death
This is a quickie character study of a man keeping his zombie wife chained in the basement. Slightly marred by the fact that the blurb in the introduction promised some kind of twist at the end when there actually wasn't one. The actress playing the wife was pretty good though.

Fear Of The Living Dead
This one has a sense of narrative and closure, courtesy of a twist ending which, unfortunately for me, I thought was pretty easy to see coming. One mistake this has though is to show deserted streets (aka the standard last man on earth scenarios) but they're all neat and tidy  locations with no zombie mayhem set-dressing on them... so when you do see the zombies hit the streets, it all looks kinda clean and incongruous. A nice enough diversion, however.

Kidz
Possibly the best film on this first disc, Kidz is the tale of three MTV generation/video game playing children who are orphaned by the zombie apocalypse and immediately leap into action, handling all the survival stuff with ease, where adults just get things all wrong. This one doesn’t have so much as a twist ending as a nice little flourish which normally wouldn’t work, but does here... It actually crept up on me without me guessing what it would be. Definitely worth a look.

The Book Of The Dead
The longest film in the selection. It's also the one which drags the most. While a couple of the performers are good it tries hard to deliver more of a story arc but ultimately the knowing references to other films (“Zed's dead baby!”) are not particularly subtle enough and the fact that none of the jokes really work, combined with an irritating opening title sequence which just drags on forever, makes this not just the longest film on offer here, but also the weakest.

Zombie Harvest
The second disc doesn't start off as strongly as I'd hoped, although the opening titles, an homage (or steal of sorts) from the films of Jean-Pierre Jeunet is nice enough and the "head up a cow’s backside" gag is obvious but still quite surprising. There's no real story arc on this, just the beginning of a zombie outbreak played for laughs. Competent but not as entertaining as I'd been expecting.

The Skin Of Your Teeth
This one's okay, less for the zombie effects (which are kinda secondary anyway) and more for the sense of the characters as rural survivors, honestly played by the four actors in question, and the way they interact with each other makes for a more believable scenario. The dead ended conclusion (no pun intended in this case) leads for an unfortunate lack of closure and renders this short sketch kinda pointless… but that's not necessarily a criticism of a piece of art… more of an observation of this particular one, which I would have liked to have seen, out of all of the shorts up to this point, expanded into a feature film.

Zomblies
Zomblies is a very different beast to the other films on these discs. It's very professional and it's a standard military rescue mission gone wrong film. The basic plot is - rescue the surviving members of the  first mission, get the viral samples they were trying to grab and then get back "over the wall" with as many as you came in with. A brilliant group of actors play in this shoot-and-chase mini epic which, at just over 40 mins, is well worth the price of the DVD. It stands up there with similarly military VS monsters movies as Neil Marshall's Dog Soldiers and... even the post end credit's nod to Ridley Scott's Gladiator and the Star Wars references don’t distract from a tip top example of a lower than low budget being put to really good use. If you like movies like A L I E N S and the aforementioned Dog Soldiers, then this is like a lower budget mini-replay of the same kind of material.

It Came From The West
This is a lively, if slightly overlong, “puppet's with chainsaws and spurty blood” presentation which mixes the zombie movie with standard American and Spaghetti Western tropes. It's quite fun in places although there's not a heck of a lot of story and once the novelty of puppets dying or re-dying from horrible wounds grinds on... at a quarter of an hour in length it kind of wears out its welcome a little. Nice to have something so different on this collection though.

Paris By Night Of The Living Dead
This is a terrible movie which looks like it could have been a starting off point for REC 3 but is ultimately just a blurry mess. And I mean, literally blurry. It looks like it’s either been shot on low definition videotape or maybe blown up from a file which would have been best served as a little, small sized internet presentation. I'm trying to forget this waste of a decent title.

Savages
Indian film Savages certainly gives Zomblies a run for its money for being the best film on this collection. The lush jungle settings are well shot and the editing is fantastic. More important than that, though, is the way the script and acting builds up the relationships between the characters on this tale of four guys who go trekking in a biohazardous, forbidden zone. I was worried when, after about a minute, there was some dancing, but the tone and pace soon settles down and this is a well realised and, given its obvious budgetary shortcomings, well crafted zombie movie.

Dead Hungry
A joyful movie of comedy gold. It's all in the timing and the performances by the main zombie protagonist and his zombie girlfriend. All he wants is some brains to eat, but those pesky humans, and other zombies, keep stopping him from getting to his food supply in this, quite literally, eye popping gem of a short. For anybody who's ever laughed at the violence in a horror movie, this short told through the eyes of a zombie is right up your street.


And that’s it. If this had stopped at just the contents of the first disc, I’d say don’t bother with it. But by the time the second disc is watched, it turns out that five or six of these movies are worth having. There’s no way anybody not into the zombie genre, or just starting out exploring those kinds of movies, would ever want to give these a spin. There are, for the most part, better feature length movies out there giving you a lot more than these shorts have to offer. If, however, you are a veteran of the zombie genre and you need a fix and don’t mind ploughing through some less nourishing gruel to find the hidden gems, then this collection is something that you might just come to cherish as time wears on.
Posted by NUTS4R2 at 17:44