Doctor Who - The Name Of The Doctor 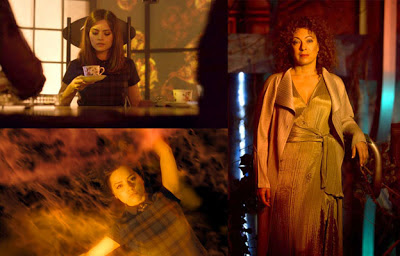 Well that was kinda interesting. It didn’t actually move me in any way like a fair few of the Russel T. Davies era did, for sure, but I didn’t hate that episode. I didn’t quite enjoy it either, to be honest. It felt too much like a mathematics problem about half way through the episode for my taste. Or like I was admiring the blueprints of some very clever machine with great enthusiasm... but without really connecting with it, if that makes sense.

Okay, so four or five years ago I started suggesting to a lot of people that, for the 50th anniversary episode (which we’re just a little over 6 months away if they air it one the day they should be, it falls on a Saturday this year, after all), it would be good if they could get all the Doctors together by CGI-ing the current doctor into scenes with his past lives in much the same way that they did so well in the old Deepspace Nine episode Trials and Tribbleations, in which the crew of the DS9 were spliced and dropped into the old classic Star Trek episode The Trouble With Tribbles. Well it looks like Steven Moffat thought along the same lines but dropped it early, into this episode instead.

Unfortunately, although the sight of seeing “impossible girl” Clara Oswald Oswin interacting with the previous versions of The Doctor from various past stories did cause me to go “ooh” a bit... I couldn’t help but notice that the traditional shoddiness of the BBC budget maybe let things down a bit and we got the equivalent of CGI matt lines and colour balance problems and goodness knows what else showing up as artefacts by the look of it. Not having a go mind you... I’m sure the task of working with such mismatched material in the first place must be incredibly hard and time consuming and it was at least nice that they decided to have a go at it... but all the same I think it might have been better to not attempt it at all if the result was looking like this.

Also, the set up with Moffat’s story arcs, as another blog writer pointed out to me in one of their reviews of an episode from a couple of years ago, is usually a lot more satisfying than his end games and, I have to say, I found that to be the case here. Even in microcosm, taking just this episode by itself, the opening 20 minutes or so were absolutely riveting storytelling which pulled me in but, when The Doctor, Clara, Jenny, Madam Vastra, Strax and River Song finally got to The Tomb Of The Doctor and scar tissue of his timeline, all the promise of something amazing happening with revelations to be told were shamelessly carpeted over with a bit of fakery consisting of half a packet of pseudo-science and the white of an egg.

The great trouble with certain kinds of science fiction writing is that, when you rely on a premise which has no real basis with fact, like time travel, then you can start writing your own rules about the nature of that specific factor of the story and use it as a crutch to write yourself out of anything. This is not the best form of science fiction writing, I think it’s fair to say. Some of the best science fiction is about using those small leaps of technological faith to heighten the way you can push the envelope on real life questions and use the premise promised by a specific scientific idea to explore speculatively the drama at a higher level than you can in real life.

Alternatively, space opera like Star Wars and Star Trek used speculatively changed real life physics to boldly go to places which are still tied in to basic real life truths. Engines get you to so and so, therefore a warp engine will get you to somewhere else where this can happen in the reality made possible by this pretence... and so on.

The worst thing you can do, I reckon, is have science fiction which talks about an amazing concept, like time travel, and then doesn’t follow on from the logical speculation of the way you can play with that, it just throws a few scientific words in together to form an impressive sounding piece of, essentially, mumbo jumbo and there you have it... whatever problem you’ve temptingly lead up to is solved in a jiffy and I’m afraid I’ve noticed that happening more and more in the show of late. An ending nowadays in this series can simply be a bit of “well you did this but that means if I [insert technical sounding jiggery pokery here] then the day is saved and it’s simple as that." Now you could argue that The Doctor has always relied on “reversing the polarity of the neutron flow” over the years but I don’t think it’s usually set up to be the one thing which solves all the problems he is having with his enemies in whichever shows he does this, unless it actually makes some sort of scientific sense, like two poles cancelling each other out might actually help in some situations.

I guess what I’m saying here is that, although it was all very nice to see the original Doctor on his way to steal a TARDIS and Clara suggesting he nick the old Type 40 instead, because it would be more fun, I’d rather have seen a more solid grounding in reality for the solution to The Impossible Girl storyline than this. Introducing John Hurt as The Doctor at the end of the episode didn’t quite cut it either and, although I’m really glad that Moffat really didn’t let slip the name of The Doctor this time around, it did feel just a little bit of a cheat making the title of the episode seem like something to be revealed when, in fact, it was just half of a quote spoken by The Doctor in reference to his John Hurt incarnation. Much as I love John Hurt, and I do think he’s a terrific actor (Will somebody please release Mr. Forbush and the Penguins onto DVD or BluRay please?), I can see that he was obviously chosen to add a certain kind of weight to the character... for me it felt a bit of a letdown, having a cliff hanger onto the 50th Anniversary story end with, to be honest, nothing really happening.

I was also a bit disappointed that the threat of The Great Intelligence did not bring about a reappearance by the Yeti... a basic “give the people what they want, or at least, what they need” should have been the order of the day here after teasing fans with this particular foe only to have his most beloved foot soldiers not make an appearance. So I was a tad let down there, I think.

At the end of the day i have to ask myself, did I enjoy the episode and I have to say... I really don’t know. I loved the interplay between Jenny, Vastra and Strax (as usual) and it was really nice to see a post-library version of River Song here, although I’m really unsure if that’s going to be her last appearance or not. Similarly it was nice to see... um... no that’s it actually. I loved the first 20 minutes or so and the rest of this episode stalled for me there. I didn’t think it was terrible, for sure, but neither was it a great episode, I think. It sets up more questions than it answers (naturally, that’s been Moffat’s main modus operandi for season finales over the last few years, so that was expected anyway) but it would have been nice to get just a little more closure and start afresh next time, methinks, than drag this out any longer.

I didn’t enjoy it like I’d hoped I would but then again, I didn’t hate it either... and that will have to do until next time I guess. Hope you all enjoyed it though. I think I may be getting a bit long in the tooth for it, perhaps. I’ve been watching from Jon Pertwee’s first appearance in the show so... maybe I should accept that the show is going to continue to have some off years, like it always had in the past, I guess. Better luck next time.

P.S. I still like Clara though, so looking forward to seeing more of her in the future.
Posted by NUTS4R2 at 21:23