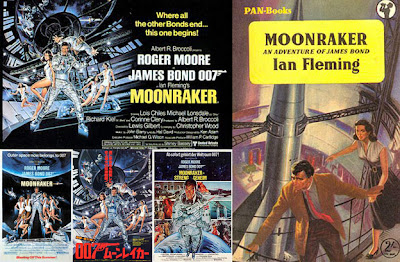 Moonraker is the third and final Bond film to be directed by Lewis Gilbert. His previous film, The Spy Who Loved Me, had continued the tradition of the “James Bond will return in” caption at the finish of the end credits sequence but falsely, as it turned out, named the next film to be For Your Eyes Only. The reason for this is very simple actually and it’s also the reason why this Bond film in particular is sometimes thought of as a bit of an anomaly to the series when, really it isn’t.

The Spy Who Loved Me was released in 1977 but something else happened later that same year which not only changed the course this next Bond film would take, but changed the course of cinema as a whole (something we are still feeling the after effects of today at all kinds of levels, actually). And that something was this...

George Lucas released a little film which he didn’t think was going to do all that well at the box office called Star Wars. Not including the obvious stylistic influences or the fact that it repopularised the orchestra as a valid option in musical scoring for a movie, this blockbuster of “all blockbusters ever conceived” and the scale and success of its merchandising significantly changed the values and expectations of producers and studios world wide... strongly influencing the way that movies were designed and the way the deals for those movies are being put together, even 36 years later. Every studio wanted a science fiction clone to cash in on the success, preferably several a year if it brought in the kind of figures they were seeing on Lucas’ budding epic.

Consequently, pretty much all the younger audiences for these kinds of movies were being subjected to from 1977 to at least 1986 were cash ins, traditional TV or comic book heroes brought to a larger venue or, frankly, some very cheap rip offs... desperately trying to keep up and ride the Star Wars bandwagon. But that’s okay, because after we’d all seen Star Wars a hundred gazillion times at the cinema... we all wanted more of the same anyway.

And we saw them all... Battlestar Galactica, Close Encounters Of The Third Kind, The Black Hole, Superman The Movie, Star Trek The Motion Picture, Star Crash, Battle Beyond The Stars, Alien and, yes, even The Humanoid (which starred Bond villain Richard Kiel in a lead role... remember that?). We lapped it up and so the producers of the Bond franchise realised, I think, that they needed something vaguely reminiscent of space and with a fistful of laserguns in it to hold the public’s interest at the time.

Now I know they’ve been criticised for stuttering the Bond franchise into this area for a film but, you know what? I think they were right. I was eleven years old at the time and it was highly unlikely I was going to sit still for just another Bond adventure around this time... but the trailer, posters and magazine covers showing Bond in a silver spacesuit with a laser gun promised something truly special and we fell for it hook, line and sinker. What could have turned out to be a Bond that was forgotten against the constant barrage of cinematic space armageddon, triumphed and made a big splash when it might easily have been overlooked if the content and, more importantly, the marketing for it... had hit a wrong note.

Fortunately for Cubby Broccoli and co, Fleming had written a book which had a title one could use perfectly to suggest a science fiction theme. Unfortunately, the story in the novel was jettisoned in the process, if you’ll pardon the expression, but it’s just as well on some level because the low key story in the book would never had been accepted in the canon of what had, by then, become the powerful Bond action franchise.

Released in 1955, the novel is actually, for this humble scribe at least, one of the greatest of the Bond novels (up there with Live And Let Die, From Russia With Love and The Spy Who Loved Me) and it’s entirely set in England. The first half concerns Bond who, at M’s request, goes with him to M’s “Gentleman’s Club” to ascertain if, and then how, a multimillion national hero and bridge player, is cheating at cards and Bond has to go up against him, card for card. The second half is Bond successful attempt to stop Drax from launching a nuclear missile on London. It’s all very British and is also very reminiscent in places of Bond’s first novel (2 books earlier), Casino Royale.

The movie ditches almost all of the plot elements of the novel and goes for all out Bond carnage in the usual manner, bringing back various characters from previous films including Jaws and a slightly more brief appearance from General Gogol. It’s Moore at his cheesiest but it works maybe a little bit better than the previous film, perhaps aided a little by John Barry’s return as composer. It all hangs together a bit better, I reckon, than The Spy Who Loved Me but it doesn’t get any better in terms of the sheer lack of intelligence in terms of the plot... with each encounter leading link by flimsy link to the next set piece with no real detection involved.

There are some really nice things about it though so let me focus on those for a moment...

Well, Jaws is back and this time, instead of treating him totally like a cartoon villain, they also give him some comical love interest, a spoken line and a big shot of redemption at the end of the movie where he teams up with Bond to take out the bad guys.

The script also has some choice lines which are quite often “groaners” like Qs final line “I believe he’s attempting re-entry sir” (not realising Bond is having zero gravity sex with Moore’s co star, Lois Chiles, at the time) and it might be said that what it lacks in story drivers it makes up for in dialogue. French actor Michael Lonsdale (who had also worked with the likes of Bunuel) plays the lead villain, Hugo Drax, and it’s an absolute pinnacle of Bond villain performance... it’s just such a shame he’s not doing it in a better Bond film. His delivery of the line “Show Mr. Bond around. See some harm comes to him.” is absolutely pitch perfect and he steals pretty much all the scenes he’s in.

Lois Chiles seems a strong but also strangely “easy” Bond girl, although I liked her when I was a kid and first saw it and her performance works fine contrasted against Moore (she had interestingly turned down the role of the leading lady Anya in the previous Bond movie). And Richard Kiel really plays the hell out of Jaws this time around, fleshing out a comically unlucky assassin pretty much as well as anyone could expect and even giving the role a certain amount of gravitas in some scenes... which is helpful when contrasted against some of the other elements of this movie... which have zero gravitas in zero gravity.

And that leads me onto the zero gravity space battle which, quite honestly, tries to do for Moonraker what the underwater harpoon gun battle in Thunderball did for that film... but with laser guns instead of harpoons. The trouble with this though, is it looks and sounds a bit rubbish when compared to the pinnacle that this kind of film effect had reached just two years before in Star Wars. And in George Lucas’ epic, at least the weapons had a bit of recoil to them. The only good thing to come out of this was that I got to own a toy replica of the Moonraker laser gun to play with and, it has to be said, it was a real beauty. Of course, it didn’t shoot blue laser death upon an unsuspecting playmate but you could put caps in the thing so if you couldn’t exactly laser your friends off this mortal coil, you could at least give those of a nervous disposition a playful heart attack. It was a toy weapon to be cherished and loved.

There are also some other quite dreadful things in the movie.

The musical joke of incorporating Maurice Jarre’s Lawrence Of Arabia theme into the soundtrack at one point in the previous instalment, continues in this film with Roger Moore riding into town dressed like Clint Eastwood. Considering the character he’s dressed like, it’s a mystery why none of Morricone’s epic spaghetti western music was used to accompany this scene, the producers instead plumping for a rendition of Elmer Bernstein’s score for The Magnificent Seven (perhaps there were some copyright issues). Yet another musical joke in the movie is the use of the famous, five note Johnny Williams motif from Spielberg’s Close Encounters Of The Third Kind... and that’s about the only one that brings a smile to the face now in all honesty (there’s also a computer sound effect from ALIEN used in the movie but I suspect this is a case of accidentally picking the same sound sample from an effects library rather than intending it to be an actual homage to Ridley Scott’s masterpiece).

The music in this one seems quite sluggish and is certainly a John Barry of 'a different time' returning to score this. I personally think of it as his worst Bond score, even though something quite special happens in the scoring at one point. That something special is the return of Barry’s 007 melody, which he first composed for the Bond film From Russia With Love. This was the only time that Roger Moore’s version of Bond was scored with this theme and it’s the fifth and final film that this melody is used in. A shame, then, that in this incarnation the theme is slowed down to treacle setting and reorchestrated to the dreariest you’ve ever heard it. It’s supposed to be scoring a fast and furious boat chase but it feels like it’s scoring a game of “Pooh Sticks” to be honest with you. It’s a theme which I still wish they’d re-use in Bond films today but its inclusion in Moonraker is a very dull affair.

And that just about covers it, I think. Other than to mention that this marks the last film that Bernard Lee played M in, before his death in 1981 (just before he was due to start shooting the next one).

Moonraker is not a great Bond film but it is, at least, a livelier affair than the previous film in the series. Moore’s Bond character is totally toned down to “inoffensive and probably quite harmless” again but the next film in the series would put a little edge back into the character. And with Moonraker, they once again got it right in the end credits. James Bond would, indeed, return... in For Your Eyes Only.

Dr. No
From Russia With Love
Goldfinger
Thunderball
You Only Live Twice
On Her Majesty’s Secret Service
Diamonds Are Forever
Live And Let Die
The Man With The Golden Gun
The Spy Who Loved Me
Moonraker
For Your Eyes Only
Octopussy
A View To A Kill
The LIving Daylights
Licence To Kill
GoldenEye
Tomorrow Never Dies
The World Is Not Enough
Die Another Day
Casino Royale
Quantum Of Solace
Skyfall
S.P.E.C.T.R.E
Posted by NUTS4R2 at 20:01