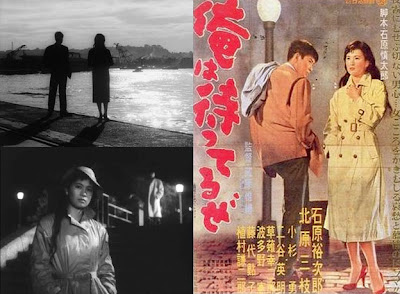 I Am Waiting is one of those films that, as a watcher of many pieces of cinematic art, you are just waiting to stumble across sometime because they are such cool films and you know your life just got richer when you’ve seen something like this for the first time. It happens less and less the older you get but I, for my part, do get at least three or four movies a year like this slipping in under the radar still... and I really love it when I find something which I know I will be going back to in certain moods and moments of my life yet to come.

The first feature film by Japanese director Koreyoshi Kurahara, I Am Waiting, dates back to 1957 and stars the “on the rise” Japanese matinee idol Yûjirô Ishihara (who got to have such a following in Japan that he even turned up in the movie Those Magnificent Men In Their Flying Machines). This is my first watch of this, as it’s included in a boxed set my parents got me for my birthday earlier in the year, the Criterion/Eclipse imprint of Nikkatsu Noir. As a fair few of the “cooler” movies I’ve seen over the last 20 or so years have come from the Nikkatsu studios, I was keen to see what some of their early “noir” movies looked like... this, like many I presume, is styled in such a way as to compete with the various American and French films that were so popular in Japan at the time (and probably still are today no doubt... especially American movies, who are back to being the rulers of most of the world when it comes to getting their product seen, it seems to me).

The film opens with the lead character, Jôji Shimaki, closing his riverside restaurant for the night and walking the gloomy path to post a letter which will have some significance as the story progresses. Here, he is the epitome of the relaxed and gloomy noir sensibilities required in abundance for this shadowy kind of movie making and, as he continues on past the post box, he stumbles upon Saeko (played with much on screen presence by Mie Kitahara), a mysterious woman who looks like she’s just about ready to throw herself in that river. Jôji comes to her rescue with offers of shelter and employment and before you know it, she is developing an unrequited relationship with him... but he has no time for love as his missing brother’s shadowy past and his own former life as a championship boxer who killed someone by accident outside the ring return and collide to haunt his world. When he finally finds out what has happened to his brother, who was supposed to have gone to Brazil a year and a half ago and “set up shop” so he could follow along after... it turns out it all ties in with the gang of cheap hoods who have reclaimed Seiko and her “canary voice” as their own.

Shot in stark black & white and featuring a story that doesn’t always quite unfold the way you think it’s going to, you can see exactly the route laid out for you like an open map when you realise how these kinds of films evolved and mutated into the kind of youth culture crime movies I normally associate with the Nikkatsu studio, namely and especially with the gradual evolution of their infamous director Seijun Suzuki, who himself only made his debut feature a year before this. It’s interesting to  view this film as possibly one by a young bunch of director contemporaries who would all evolve via the same kinds of influences and make these kinds of films at Nikkatsu, Daiei and Toho studios that would define the style of film-making that went on in that country... certainly influenced by the outside forces in other countries who were dictating their market for them but also, I am sure, forging their own visual/audio language that are what we think of when we think of what they were doing from, say, the mid sixties to the mid seventies.

At least, that’s how I’m guessing it all went down anyway... without having seen any other of Kurahara’s movies to date but certainly having seen a fair few of his contemporaries flex their visual muscles. And Kurahara certainly lets loose with a certain amount of creative flair in this one. Shots composed beautifully for a 1.33:1 aspect ratio that are easily the equal of anything he and his contemporaries would have been designing for either Academy Ratio or whatever novelty form of ‘studio re-christened scope’ alternatives were the going rage some five or ten years later.

It’s really beautiful to behold and it doesn’t hurt that it’s got a score by semi-regular Kurosawa and Godzilla composer Masaru Satô either. And it’s also got some great performances in it too... Yûjirô Ishihara plays Jôji as a depressed but good natured man haunted by his fate, while at the same time also managing to balance that with a smart sheen of energetic enthusiasm, which makes him interesting to watch. Kitahara’s performance as Saeko is similarly haunted and depressed in its basic execution but where Isihara is all action and movement, Kitahara just uses a kind of static force to lift the scene and she is content to quitly smoulder and speak and act in a more minimalistic style which, offset against her leading man, is really something which holds your attention. It all just works very well.

I Am Waiting is not going to be everyone’s cup of Japanese green tea but certainly, if you like the look and feel of films by such directors as Jim Jarmusch, Seijun Suzuki, Sam Fuller and, I think, the young Ingmar Bergman, then I Am Waiting is probably going to go down very well on the tastebuds I reckon. Sip it slowly and savour every frame though... don’t gulp it down when you have no time to reflect afterwards. Certainly a movie I’ll be coming back to, I’m sure, and something I kind of wish I’d had the opportunity to be able to see a few decades ago when I was in my teens. Give it a watch if you get the chance.