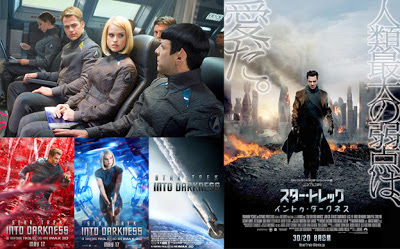 Dark Trek:
Gorn But Not Forgotten

Warning: Big, wrathful spoilers will awaken
in this review and walk over your cold corpses.

There’s an old Vulcan proverb that says that, sometimes, it is possible to have your cake and eat it.

Or at least, if there’s not, there probably should be. I don’t think I mentioned it back in my review of the last Star Trek movie (right here) but this ‘have cake and also eat it’ mentality certainly drove the previous film in terms of skewing off the timeline into a new series of adventures with the same characters without having to worry about any previous Star Trek continuity. And it managed to keep the original Leonard Nimoy version of the Spock character in this new universe too.

Star Trek: Into Darkness also, very much, uses this cake-eating logic because what we’ve got here, and this is something a lot of Star Trek fans guessed from early trailers last year, is a partial remake and homage to the two previous Star Trek stories which featured Ricardo Montalban as the superhuman villain Khan Noonian Singh, namely the original series episode Space Seed and its big screen sequel Star Trek 2: The Wrath Of Kahn. Given that the second film in the series is so beloved by fans and that this is director J. J. Abrams second film for the franchise (but, given the presence of Nimoy as Spock in these films, certainly the 12th in the series and the 8th to feature Leonard Nimoy as the original Spock), I’m guessing the temptation was always there to match the darkness of The Wrath Of Khan and somewhere in that early process the decision was made to... “well, what the heck, let’s just have Khan in it”.

This, is something which, given the pre-publicity hype on the movie, may have been better highlighted in the marketing instead of being kept a mystery because... well frankly it backfires. The film probably works on two levels but most people who are even minor fans of Star Trek are going to figure out what’s going on very early on. When the role played by British actor Benedict Cumberbatch, who appears to demonstrate superhuman combat skills (saving key crew members of the Enterprise from a bunch of klingons) asks how many of the strange, new “super proton torpedos” there are and is told that there are 72, people will probably remember there were 72 left of Khan’s superspecies in the original Space Seed episode and, even if you don’t realise that (and I confess I didn’t)... even I, by that time, had figured out that there were super powered beings being hidden in the torpedos long before any of the characters in the Enterprise crew figure it out.

The story structure does seem to be the biggest weakness of this movie, in all honesty. It’s simplistic and the arcs of the characters are too obviously signposted. When the excellent Simon Pegg, playing Scotty, resigns from Kirk’s command due to a difference of opinion, it’s pretty obvious he’s being left behind to save the day when it looks like the Enterprise crew are about to be destroyed... and I found this kind of set up for a touch of temporary deus ex machina just a little disappointing in the overall scheme of things. And that kind of strategy is pulled out and reused quite a few times in this movie.

A puzzling but major source of enjoyment for the film, though, are the direct quotes and scene remakes from both of the first two films in the franchise. Admiral Pike, for example, is once again seen wearing the outfit that Admiral Kirk wore throughout a lot of Star Trek The Motion Picture, and he even has William Shatner’s “They gave her back to me...” line which, actually, given the context of that line in this movie, kind of hit a bit of a false note with me in all honesty. It was also a bit of a shame to see Pike’s final fate as being so different from the character’s farewell in the original series story The Menagerie.

Of course, the big scene which is going to get a lot of Star Trek fans uptight is the remake of the ‘Spock death scene’ from The Wrath Of Khan, which is plugged in near the end of this film but in reverse, with Kirk dying behind the radiation flooded compartment and the two characters switching and referencing each other’s lines from the original. This all, like a lot of the sequences in this movie, relies on a certain knowledge of the previous versions of the on screen references to tap the audience into feeling anxiety and suspense based on prior versions of the scenes, rather than anything created specifically for this movie... although there are those kinds of moments too, to be sure. The real cheat and ultimate disappointment of the ‘Kirk death scene’ in this one, though, is that even before Kirk is dead, you know exactly how he can be brought back to life again... since the story uses advanced genetics as one of its elements. So this movie is, in no way, as gutsy as when Spock was killed off, possibly for good at the time, back in cinemas in 1982 (although, to be fair, they did build in a little escape door in case they could talk Nimoy back for the third film... one which was used for his return soon after).

Okay, so far I’ve mostly talked about the negative or slightly disappointing aspects of this movie. What I’ve been leaving out, however, is that some of these same scenes, along with loads of others in the movie, are also bags of fun and make for an all around ‘grade A’ entertaining motion picture experience. People who took to the last film in the franchise certainly shouldn’t be disenchanted with this one and I, despite all the things I’ve been mentioning here, really loved it.

The performances were all great although there was slightly less of an ‘ensemble’ feel to it with Sulu, Chekhov and even McCoy not getting that much chance to shine here... but then again, that would also be in keeping, to some extent, with the way the original series was put together in the 60s which, although it did have a very good ensemble cast, was very much the Kirk and Spock show for a lot of its running time (something some members of the original cast, famously, never seemed to forgive William Shatner for, for some reason).

There’s a lot of action in this one and lots of bright, classic Star Trek colours (intermingled with a touch of dreary colour homage to the look of the first film in the franchise too). There’s even a nice line which relates to the fan pleasing “red shirt” status, when Chekhov is promoted to Mr. Scott’s post and asked to “put on the red shirt”, which immediately causes the fans in the audience to wonder if they are going to be killing Chekhov in this one. Nice references, too, to past Trek races and characters such as the Gorn and Harcourt Fenton Mudd but, I did wonder why there was only one tribble in the film (which is used as a plot device, as it happens). Surely there should have been more of them after a short while?

One big old character reference is the introduction of a young Dr. Carol Marcus, who we only knew as an “old flame” character at a much later stage in her life in Star Trek II: The Wrath Of Khan. We know in the original version of the timeline she gives birth to Kirk’s son who is also in The Wrath Of Khan, and who is killed by the Klingons in Star Trek III: The Search For Spock... so we already have foreknowledge of where these characters may well be going in future films in the franchise.

It’s a shame that Noel Clarke (companion Mickey from Doctor Who and a successful writer/director in his own right) didn’t get more of a role in this film, however. His scenes are over and done with pretty quickly and his character is just used to establish the threat the Enterprise crew in this film face. That threat, however, is indeed Khan, and although Benedict Cumberbatch obviously plays him in a completely different way to the way Riccardo Montalban used to play him, he is still a very real and dangerous threat and, when you’ve got an actor of Cumberbatch’s calibre in the role... you know you are  not going to be let down. I was very pleased to see that the character, and his superpowered army, have all been preserved in cryogenic sleep and locked away in a warehouse, in the style of the ending of Raiders Of The Lost Ark... Khan with a sinister smile on his face. I hope the director and writers consider bringing this character back for the next installment in the franchise to cause more mayhem... he has, after all, kind of become the Moriarty character to Kirk’s Sherlock in a way (which is kinda ironic, given the role he’s most famous for on British TV screens).

Added into the mix, of course, is Abrams’ regular composer Michael Giachinno, who both repeats and builds on his excellent score from the previous film and, thankfully, remembers to bring back Alexander Courage’s original fanfare and theme tune right where it’s needed. I’ve already got the CD on pre-order from Amazon and am looking forward to wearing it out as soon as possible.

All in all, then, Star Trek: Into Darkness is wildly entertaining and, as far as I’m concerned, very repeat watchable (yeah, I’ll be getting in line for another showing and grabbing the BluRay when it’s out). Certainly it might annoy hardcore fans of the franchise but I think, even if they lighten up a little they will probably enjoy it too. The reliance towards past reference to hit the right notes worries me a little in terms of Abrams being entrusted to direct the next Star Wars movies (we need proper sequels, not a bunch of old character references) but certainly he’s not been too disrespectful to the Star Trek franchise and these particular movies seem to be heading in the right direction I think... although the laws of physics are completely abandoned in these new movies. Don’t get me started.