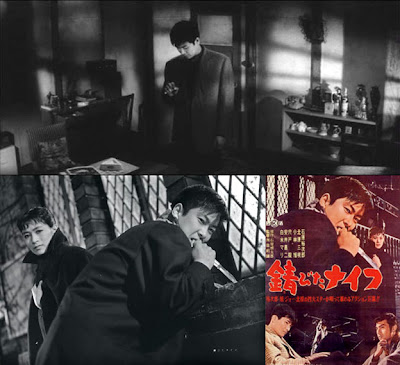 Made the following year, after Kurahara’s I Am Waiting (reviewed here), Rusty Knife, the second in Criterion Eclipse’s excellent boxed edition Nikkatsu Noir, retains the same lead actor and actress from I Am Waiting but now I find myself in more familiar territory with Nikkatsu, in that this movie is shot in “Nikkatsuscope”, allowing this movie’s director more room to design some compelling compositions.

I’m not so sure, after having seen this film (another first time watch for me here) that I’d personally call Rusty Knife a film noir... maybe more of a crossbreed between a crime thriller and police procedural, I would say. The tone is quite dark but certainly the characters and atmospheres mostly don’t seem moody enough for what I am used to seeing in a noir and, to be honest, I would have said this is more like the later films I’ve seen in the Nikkatsu releases (the majority of which were directed by Seijun Suzuki... although I’m not sure how much he was influenced by his contemporaries at the studio or, indeed, whether his contemporaries were paying much attention to his particularly uncompromising style at the time).

What I do know is that the storyline is a little skewed again and doesn’t necessarily follow a simple narrative line as you might expect. Starting off as, like I said before, a police procedural movie, the lead detective arrests the mascot boss of a gang of criminals but, as often happens to him, has no proof that he has killed anyone, as they suspect. No witnesses will go against him in court. When the police are tipped off that the man in question has killed someone and it was witnessed by three people, the man who wrote the letter tells the police that he will be the one to finally testify against this small-time “kingpin”.

The man who prompts the reopening of the investigation is a trademark Suzuki actor in an early role, Jô Shishido... not two years after he had undergone the plastic surgery which made his cheeks more prominent and earned him the nickname, in some quarters, of “The Chipmunk” (he is perhaps best known to Western audiences as the anti-hero assassin of Suzuki’s Branded To Kill). It doesn’t take that many minutes before Jô is in trouble with the gang who have tailed him and when he thinks they are the police, he follows them aboard a train... only to be thrown from there into the path of another oncoming train in a brutal murder. It is his tip off letter which his girlfriend sends to the police when he doesn’t show up after a pre-arranged amount of time has passed, that allows the police to both identify his body and go off to find the other two men who witnessed the fake suicide.

Things get complicated as the two men are working in a diner they opened after the main protagonist, played by Yûjirô Ishihara, served some jail time for a crime which is revealed in its scope later. Now he just wants to stay straight and out of trouble with the law, while still keeping himself out of danger from the gang who know he and his friend were witnesses. Then things start to get ugly, as friend turns against friend, people are bought off and ultimately elected for disposal by the main antagonists.

Ugly for the main characters, at any rate. Quite beautiful for the audience, though, who are able to watch the action unfold in Masuda’s not too flashy but still quite beautiful shot compositions and it’s an especially good picture for those who require some action in their movies. There’s a great little high speed truck chase which leads to fisticuffs in one sequence and there’s also some betrayal and a quest for vengeance as Ishihara’s young friend finally turns up for the police, only to be taken out by a sniper while he’s left in one of their interview rooms. It’s at this point that we realise that a character at the police station is also corrupt and very much, on the take, as it were.

The film is nice to look at with some engaging cinematography, the editing is naturalistic and leading lady Mie Kitahara’s screen presence, while not nearly as “smouldering” as it was in I Am Waiting, is still something which is very much on the forefront of your mind as you watch the scenes with her in them. Godzilla and Kurosawa composer Masaru Satoh’s score is serviceable but doesn’t really stick in your mind after the film is done... but it does it’s job, to be sure, and so the viewer (or listener) should be happy.

There’s not a lot I can really say about this one since my knowledge of this particular part of Japanese cinema is not as great as some other areas but I will say the film lives up to the other 30 or 40 Nikkatsu branded movies I’ve seen by being slick and having a certain stylistic bent towards empty but beautiful posture and artifice within the shot. These Nikkatsu films really couldn’t look bad if they tried. Certainly another film I’ll be looking at again at some point in the future and absolutely a must see for fans of these kinds of features.
Posted by NUTS4R2 at 14:19