Take Aim At The Police Van 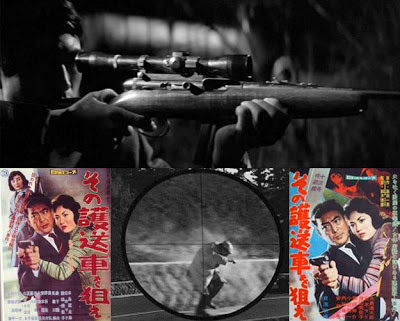 Warning: Yeah, this one’s going to have spoilers.

Very much a man who I would call the Sam Fuller of Japan, with one big difference. Sam Fuller was a great American B-picture director who would churn out projects under a studio system. However, because he was working on lower budgets, he wasn’t attracting A-List attention too much... and that was the very reason Fuller could make films more or less the way he wanted... which was usually with a quirky and interesting artistic sensibility all of his own. Similarly, Suzuki was making films pretty much exclusively for Nikkatsu studios in, more or less, a similar kind of set up I would guess. This let him experiment in interesting ways with the art of film technique but, unlike Fuller, Suzuki began to attract too much interest with what he was doing and this ended up with his dismissal and blacklisting after his work on what is probably his most famous film in terms of broad recognition in the west, Branded To Kill.

His works were getting more and more surreal and less comprehensible to a lot of audiences, although people of a certain sensibility cherished and loved them probably as much then as when they were rediscovered years later. It took around ten years for Suzuki to work on feature films again after he made the decision to sue Nikkatsu studios (rightly so, in my opinion... I’ll take art over the risk of offending people or financial concerns, any day thank you very much) and even then it was sporadically.

Take Aim At The Police Van comes from very early on in Suzuki’s career but, even so, he was so prolific that even though he made this at the start of the fifth year of his career, this was already his fourteenth feature film. And it’s a film I’m really glad to have added to my little library of Suzuki classics because it’s easily one of the better examples of his work I’ve seen.

Now I know, from doing  a quick little bit of research (no, honestly, very occasionally I do the odd five minutes or so of research before I write a review here, believe it or not) that this film is generally not thought to be as good as his mid to late sixties output but, frankly, I think that’s a bit of a wrong call and I’m here to tell you different. This is a nice little masterpiece... not exactly “noir” as the Criterion Eclipse box proclaims it to be (although you could argue that the plotting has a certain, noirish tendency, I suppose) and much more like the hip, action kind of movies that would make his work stand out against various other directors churning out similar films at the same time.

Even the story is a little bit unusual in that it deals with a middle aged hero and not a young teenager or 20 something protagonist. The character in question, Tamon (played very well by Michitaro Mizushima) is a likable prison guard who is transporting a load of prisoners in a van when a sniper crashes a driverless truck into the van and shoots two of the prisoners dead. Because Tamon is in charge of the prisoners at the time and is therefore technically responsible, he is suspended from his job for 6 months. However, he needs to know just why the events at the start of the film happened and so he does his own investigation into matters which, of course, mixes his character in with all sorts of underworld types and also the cops.

Right from the outset the film shows a visual flare which is typical of Suzuki’s work for Nikkatsu. The pre-credits shows an unknown sniper at night attaching a piece of chewing gum to the top of his sight before we are treated to a camera eye view of just what the sniper is seeing. He slowly pans down an empty road and focuses on a series of five or so signs which each make up part of a single message, warning about the danger of accidents in the area. It all looks very cool  (and is replayed but, I think, with slightly different footage, later on in the film) and it really sets up the whole “predator laying in wait” vibe which, quite recently, the opening sequence of Jack Reacher (reviewed here) also managed to do very well... but this movie does it in a fraction of the time. It then goes into the opening credits where a song plays against a view from the front of the titular police van’s windscreen, split into two by the vertical middle-section as credits play out against the beam of the headlights hitting the road while the van is in motion.

Suzuki really is on form with this one and although he didn’t write it, and it’s adapted from an existing novel, he really does let loose with what would become some of his very definitive stylistic traits later on in his career. Such as the way the screen can be split with verticals and horizontals to allow actors and actresses to be separated by those artificial planes, sometimes at a different size due to the way perspective seems almost flattened against the foreground elements. Or a flashback sequence where various incidents from the film (including a naked girl clutching her breast where she has been shot with an arrow) are replayed almost exactly as they were in the earlier sequences... but against a black backdrop and sometimes from a different angle. It’s almost like the early Soviet montage of Sergei Eisenstein where he would pull a person artifically from long shot and intercut a more perfectly composed version of that person in contrast, instead of dollying in on them. This gives the flashback sequence, as Tamon tries to piece together all the clues he is thinking of, a surreal and almost nightmarish quality which is a good way of expressing the world in which Tamon has accidentally landed, perhaps.

Another, surreal sequence is where Tamon and a woman who he is investigating are tied up in the front seats of an oil truck which is sent down a long slope with a blaze of fire chasing the leaking oil tap... it seems strange that a bunch of not very imaginative gangsters would be responsible for such a long, drawn out method of executing their enemies but then, hey... welcome to the world of Seijun Suzuki.

The performances are all really fine in this and the music by Koichi Kawabe is really energetic, jazzy and addictive. It’s the kind of thing I would love to turn up on CD one day, although I suspect I won’t be in luck. The photography, also, is of a particularly crisp black and white quality... almost but not quite foreshadowing Branded To Kill in its intensity and the compositions, as noted earlier, are all very interesting and ensure you won’t have a dull time as you wait for Tamon to survive various perils and gun battles in order to finally solve the problem of why two of his prisoners were targeted and how it affects everything else in the story. But then again, it’s a rare occasion when a Suzuki film is actually dull, to be sure.

Another winner, then, for the Criterion Eclipse Nikkatsu Noir set although, as I pointed out earlier, I wouldn’t say that labelling it as noir is really doing it much of a service. Definitely one to check out, though, if you’re a suzuki fan and, even if you’re not, there’s enough of his stylistic flourishes in this movie to make it a fair enough jumping on point if you’ve never seen one of his movies before... although I would probably point you in the direction of Youth Of The Beast or Branded To Kill if you wanted to hook yourself right from the first viewing.