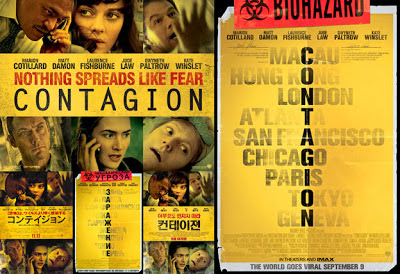 Warning: Spoilers slowly mutating and spreading
throughout this review as you read it.

Okay, so Contagion was a movie I really wanted to see when it came out in cinemas at the end of 2011 but I was already well into my 3-4 month Christmas preparations by then so I just couldn’t claw back any time to get out and see this one. I forgot about it after that, in all honesty, but when I saw a copy of the 2 disc Blu Ray/DVD edition in my local exchange shop going for a fiver, I finally remembered I’d wanted to see this one.

It’s interesting because, at the time it came out, I don’t remember this one being particularly marketed on the strength of the director and, considering it’s got a very big cast of ‘movie star’ actors like Matt Damon, Gwyneth Paltrow, Kate Winslett, Lawrence Fishburne, Marion Cotillard, Jude Law and Elliot Gould in it, it’s no wonder that the movie was kinda sold on its cast rather than any of the non-acting crew. In fact, because there are no credits at the start of the film, I managed to go all the way through the movie without knowing who directed it... although I did pick up right from the outset that the way this movie was shot was definitely something above average. I’d just assumed it was an old Hollywood director from the 60s and 70s come out of retirement to get that kind of ensemble piece going... but now that I know it’s Soderbergh and compare it to the last film I saw by him at the cinema, Side Effects (reviewed here), it all makes sense now.

Contagion is, for the most part, a quite impressive beast of a movie. It manages to look and feel epic in scope without really becoming too bloated by its own ambitions, although the second half of the movie did drag just a little in some places... but for the most part, especially in the first half, I was absolutely riveted.

Since I hadn’t known who the director was before I watched it, my main attraction for actually giving some time to this “virus movie” (yeah, it’s Outbreak without the monkey, but that’s okay) was actually Gwyneth Paltrow, who is an actress I seem to rate a lot higher than most people do. I rarely watch the kinds of films she’s in so I was looking forward to seeing what she was like in this one but, unfortunately, it turns out that she doesn’t make it through maybe even five minutes of the movie before dying from the virus she’s contracted on the day before the opening scene. There are some scenes with her later on in the movie where Soderbergh cleverly uses standard film footage and then freezes it at specific moments as a metaphor for the long distance security cam footage of this character that Kate Winslett’s character is reviewing simultaneous to this... but for the most part her quick death and the subsequent death of her son while Matt Damon is away having to deal with her dying in hospital, is merely used to make an opening point.

Matt Damon is not the main protagonist of this movie though... or, to put it another way... Matt Damon is one among many main protagonists throughout the film (as indicated by the actors playing them in the cast above) and as a result, no person stays as the focus of the film for very long. It’s also a film about the way characters can drop out of the narrative when you least want them too and it all meshes together to present an experience which is very much about a disease and the effects that disease has on every one (whether they have contracted the disease or not) and so, for instance, Kate Winslett’s World Health Organisation employee who is working for Lawrence Fishburne becomes this film’s Marion Crane character (Janet Leigh’s character in Psycho) as the story strands you are following with her character come to an end when she ends up being a customer in one of the big triage sites she has set up to deal with the onslaught of the virus. Her death works really well and, although you obviously have some warning of the end coming with her character, the slight shock value is not really deadened all that much by the inevitability of her situation.

However, in some scenes, this tactic about the film being about the effects of a disease rather than the people, backfires somewhat when the characters are maybe a little too fully explored than necessary (which is why I believe the second half of the movie loses it just a little) and while it’s very interesting and brilliant to explore just how Lawrence Fishburne’s character manages to get himself into trouble with the government just by showing a little empathy or the way in which Marion Cottilard’s character is kidnapped and used as a bargaining chip specifically because of her relationship with the World Health Organisation... or even how Jude Law’s unsympathetic (for the most part and dependent on your view of homeopathy and greed) blogger gets taken down by the CIA, I think we didn’t really need to have such closure on the ends of these mini stories because they detract from the “virus sweeping everyone along in its wake” kind of sensibility which a lot of the rest of the movie has in spades.

Actually, Lawrence Fishburne has to get an extra mention from me because he has been given some of the best lines (the dialogue is very 1970s “Hollywood crisp” in some sequences) and because his character is just so righteous and sympathetic that you would always want to be fighting in his corner. He is portrayed as a boss who actually does care about his workers and their personal physical and mental health as much as the jobs they need to carry out for him.

I said I knew right away that this movie had been directed by someone special. Well there’s at least two interesting things going on with this movie which I think I’ve got Soderbergh pegged on now. One is the way in which the colours go from very neutral to quite colourful (especially in the sequences with W.H.O workers in their more natural office environments, which are usually accompanied by some bright warm yellows and oranges) as opposed to the washed out greys and blues of the rest of the film and then switch back again from scene to scene. Even a bright green used to desaturate the feel of the shot at the start looks very drab because, as you probably know, green lighting usually kills off or neutralises flesh tones and this is used to give the usually glowing Gwyneth Paltrow a real visual sense of being someone who is feeling run down which, coupled with her excellent acting, works really well, of course.

The other great thing Soderbergh does is to have the camera lingering on little details in the shots... which is a tactic I’ve seen him use before to highlight certain details but which, in this movie, is used almost specifically to allow the audience to reflect on how something might be carrying the killer virus that is the main subject of the film. A folder left on a desk, for example, suddenly makes us think twice after the owner has walked off and we stay at the desk with a file. Or the way in which, instead of following Matt Damon and his daughter out of the hospital environment, our camera eye stays behind to linger and watch the door to the outside world slowly shutting, to make us think of the possible consequences of Matt Damon maybe being a carrier of the infection. That kind of thing is done at suitable intervals and it all raises this movie up and gives it a certain lift and entertainment value where another director might have made less of a point of it.

My only real complaint about the film, other than it trying to bring too much closure on certain scenes (the Stockholm Syndrome style reaction of Marion Cottilard towards the end after she has escaped and then goes back to warn her prior captors is something which stretched credibility just a little and which I could honestly have done without), is the score... which is quite wonderful in it’s own right as a score by Soderbergh regular Cliff Martinez but which seems to give us a little too much of a high in some scenes, where it deviates from it’s quiet, sinister tone into something more like techno dance in certain sequences. It’s a valid way of scoring the scenes in which it does this, I think,  but I kept asking myself if I should have been tapping my feet when everyone was fighting for their lives against a killer bug. It maybe works more appropriately in Italian giallo or horror movies than it did here but, still, it managed not to stretch things too far, maybe, and all in all it’s something I’d like to hear away from the movie if I get a chance. So that can’t be bad.

The ending scene was a slight disappointment, perhaps, only because you knew how this film was going to end from the first shot. The movie catalogues the number of days the virus has been active and we start the opening of the movie on Day Two and carry on from there... so it’s really not rocket science to figure out that with such an important moment remaining undisclosed, we will flash back to Day One for the finale and it certainly doesn’t play badly. Just might have been nice to be a little less predictable there, maybe.

So, anyway, my verdict for this movie is very much that it’s a film which is an impressive piece of screen art. It takes what is ostensibly a big name, Hollywood style cast and manages to pitch them against each other in the service of the story and main messages rather than use them as performances to just hang big movie moments on. This is a film which is put together as a creative and expressive piece, as much as a film like this could be, with the kinds of funding modern movies need and I was really pleased to have seen it. Definitely worth your time if you like big disaster movies or Soderbergh movies in general.
Posted by NUTS4R2 at 15:27