War Gods Of The Deep 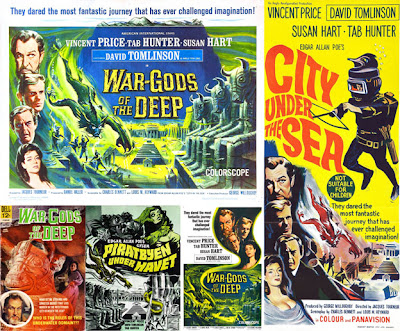 I was looking forward to this movie after just having listened to the score a few times and wanting to know how the music “fit the picture”, so to speak. Well... I think to best summarise my experience would be to say that War Gods Of The Deep is a very... um... interesting movie.

That is to say...it’s quite a bad movie on many levels and, unfortunately, it doesn’t quite (for me at least) fit into the “so bad it’s brilliant” category of cheesy B-movie that I’d kinda been hoping for, although there are many bad judgement calls made along the way. However, where it fails in certain areas, it does make up for with other factors so... wait, I’m getting ahead of myself here.

Let me put a few facts before you first.

The director of this mini adventure is none other than the famed genre director Jacques Tourneur who made such classics as the original Val Lewton produced movies Cat People (a brief review of which is included here), The Leopard Man and I Walked With A Zombie (the latter of which is famously, of course, a zombie remake of Jane Eyre). He also directed the brilliant “adaptation” of M.R. James Casting The Runes as the film Night of The Demon/Curse Of The Demon (reviewed here), which is another piece of cinematic horror movie brilliance. I was, therefore, rather surprised when I saw he’d directed this piece of tosh, to be honest.

The film is distributed by AIP who was in the middle of a string of hits with films that were adaptations (aka inspired loosely by a scene or two) of the short stories of Edgar Allan Poe and so they’d kinda started really cheating on the extent they could get away with tagging up movies with the legendary author’s name. The movie known as “Egdar Allan Poe’s The Haunted Palace”, for example, is not actually based on Poe’s poem of the same name at all. It is, instead, an adaptation of H. P. Lovecraft’s brilliant tale The Case Of Charles Dexter Ward and the “Poe” designation is, barely,  justified by including a few lines from Poe’s verse at the end of the movie. My understanding is that, at this time, Lovecraft was a bit less known and not the legend he is today.

War Gods Of The Deep suffers a similar fate in countries where it was marketed as either The City Under The Sea or City In The Sea, because it was pretending to be based on Edgar Allan Poe’s poem City In The Sea (see the link below this review for a reading of this poem by Hypnogoria) but all it has in common with that piece is some lines of the poem recited by Vincent Price, who was at that time (and possibly still is to some extent) the figurehead for all things Edgar Allan and I suspect even he knew that for a lot of people he was “Poe made flesh” in celluloid. The “E. A. Poe-To-Go” guy, so to speak. Oh well, alright then, it does technically have a city in the sea in it too... but you don’t really get to see much of it, to be honest.

What we have here, then, is a completely made up story about stumbling upon a city under the sea off the coast of Cornwall, peopled by immortal smugglers who have been kept alive for hundreds of years due to... um... the properties of the water... and who have captured the leading lady of this movie because she looks like someone Vincent Price’s character used to love, many decades past.

The film starts off quite promisingly, actually, with some locals finding a washed up corpse on the beach and among them is leading hearth-throb Tab Hunter, who is quite convincing as a tough, cynical character... for about 3 minutes, until he goes up to “the house” to see his new lady friend acquaintance to tell her one of her guests is missing. From that point on his “acting switch” just seems to get turned off and he seems to be wooden, contradictory to his character’s initial set up and just generally inappropriate in his acting style for the entire rest of the movie. When his ‘lady friend’ gets kidnapped by a gill-man, he goes off with his other new friend, played as complete comic relief by David Tomlinson... and Tomlinson’s pet chicken.

They find a secret passage through a bookcase in the house which takes them down to a City In The Sea... too complex a labyrinth for them ever to find their way back (or so we’re expected to believe). There they see a young Tony Selby chained up in a water filling cavern and try to rescue him for all of 10 seconds before running off and saving themselves instead, which is not that great behaviour for ‘the good guys’ really but then again, who hasn’t wanted to drown Tony Selby at some point in their lives (no, don’t quote me, I’m kidding). Then they meet Vincent Price, who had apparently only read the script six days before arriving in England for the shoot. He plays the evil leader of the smugglers in his best and most earnest Poe style... which is also completely inappropriate for the style of the picture as it’s been playing so far.

In fact, there is no real chemistry in this movie at all with, it seems to me, any of the actors and actresses involved. They all seem to be very much doing their own thing with no thought about how their acting style fits in with anybody else and how it may help or, in this case, damage the picture... which is a bit of a shame because there’s some nice stuff happening on a technical level with the movie which is really quite brilliant.

Anyway, it turns out the dwellers of the city under the sea are looking for a way to plug up the underwater volcano which has been threatening to erupt and destroy them all for many decades now... so Vincent Price gives his new captives the job of finding out how to nullify the volcano with a deadline of three hours, or they will both be killed. Which is kind of unfair, really, considering he’s been trying to figure out a way of doing it for many years with no result. It turns out, of course, that the smugglers can’t return to dry land by day or the sunlight will rob them of their extra years and they will all die of extreme old age in moments... which is why they use their friends, the gill-men, if they need to “acquire” anything from the land above the sea.

At this point, our heroes meet the only person in the movie who actually seems to be doing a really good acting job and who is trying his best (and mostly succeeding) in fitting in with all the different modes of acting expression going on about him... as a new character helps our heroes escape and shows them a route back to their home which, naturally, involves wading about in diving suits and warding off gill-men and underwater crossbow armed smugglers in a long and quite tedious, extended chase scene. That actor is... John Le Mesurier.

Yes, that’s right. Sergeant Wilson from Dad’s Army acts everyone else off the screen in this film.

And that’s about as much of a simplistic and, frankly, impenetrably contradictory plot you will get out of this film. The volcano happens to go off before even our heroes’ three hours are up and it really does seem to be a bit of a coincidence that, after decades upon decades, the volcano decides it’s going to go off right this minute.

So... acting and script aside, the actual direction and cinematography on show in this one is quite astonishing. It’s always been my long held belief that Corman’s use of extreme colour contrasts in certain scenes in his Poe films for AIP are what contributed to the eventual assimilation of a design style which led to psychedelia within the public consciousness of late 60s pop culture and my personal belief is that this is because he saw a lot of the foreign product put out in a re-edited form by AIP, notably the films of Mario Bava. And this highly saturated method of colour work is something that some of the other AIP films kind of inherited too. Certainly War Gods Of The Deep is no exception. One could be excused for thinking the director is channelling Bava in no uncertain terms as deep reds and lime greens are pitched against other within shot in the least naturalistic and artificial way you could imagine.

And it looks incredible... especially when the design of the shots is so clean.

Tourneur also seems to have inherited Corman’s trick of leaving doors in the background of the sets open so another set shows through from behind, to give the shot a general sense of depth. One can be forgiven for ignoring the obvious mish-mash of different architectural styles and artefacts juxtaposed in the sets, which obviously are mostly borrowed from previous productions (it suddenly all goes a bit Egyptian at one point for a little while, for no apparent reason) because the composition of the shots and the way he directs the actors to move around them, is all very breathtaking.

This makes up for a lot but, it must be said, the gill-men aren’t all that great. They’ve tried, as films which came after this like Island Of The Fish Men and Humanoids From The Deep have also tried, to make the monster costumes be a stylistic flashback to the original Universal Creature From The Black Lagoon films... but, like those other two movies I just mentioned, fail utterly to capture the sheer impact and appealing quality of that first costume from the fifties film series. So that’s a shame... but the first fight in the house between a gill-man and Tab Hunter, where they throw things at each other for a bit, is still pretty good.

Stanley Black’s score for this movie is also pretty good, I would say, pushing the adventuresome qualities of the movie to their full... probably a lot fuller, actually, than I would have expected but it certainly adds to the fun. It’s just a shame it’s being showcased in a less than perfect movie.

So there we have it. War Gods From The Deep is really not a Poe film and if you go into this thinking it will be then you’ll probably be disappointed. The acting and script are both laughable elements but this is saved by some good shot design and execution. Steer clear if you are not a fan of trashy b-movie AIP films but certainly go and have a look if you are interested in exploring the less successful spin offs from the ‘Poe Fever’ that was on everybody’s mind at the time. For this reviewer, however, one Poe quote certainly springs to mind... “Nevermore.”

To hear a reading by Hypnogoria (aka Jim Moon) of Edgar Allan Poe’s City In The Sea, click here.