Doctor Who - Nightmare In Silver 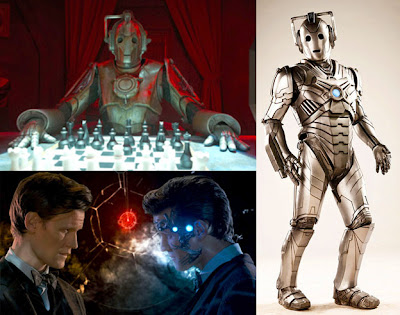 You know, I really used to like the cybermen as a nipper, growing up with Jon Pertwee as The Doctor. That’s possibly because they were never on TV at that point, of course. Jon Pertwee didn’t met up with them until he officially came back to the role one last time in the anniversary story The Five Doctors. But I knew about them, of course. Because quite apart from Pertwee standing against one of them on the wraparound cover shoot for the Doctor Who tenth anniversary magazine (which I still have) all the kids my age, or any who were of any interest at any rate, would read the Target novelisations of the older stories and, as you may or may not know, the cybermen were pretty much running rampant through Patrick Troughton’s rein on the show, hot on the heels of the really sinister looking versions used in their first outing, the final William Hartnell story The Tenth Planet. So we all knew who they were and we all wanted to see them in action.

So it was pretty cool, actually, when Tom Baker’s incarnation of The Doctor met them in Revenge Of The Cybermen... and then they didn’t come back again for a while. Tom Baker never met them again but when Peter Davison came on board they returned in a big way in the story Earthshock, which truly brought the scariness of the cybermen back in a marching legion of terror... very sinister first episode if I recall and, pre-internet, nobody really had a clue they would be back until the big reveal at the end of the first episode. Not only that, but they killed off The Doctor’s companion Adric, who sacrificed himself to save the planet Earth (and who destroyed all the dinosaurs in the process if I remember correctly). This was a big event and I remember the end credits of that episode being silent (do I remember correctly?) and focussing on the decimated remains of Adric’s gold rimmed badge for mathematical excellence, which he’d used to take out one of the cybermen with... being that they could be killed by the introduction of gold into their system.

But after that, things started to get a bit silly.

The BBC, in much the same way as they have been behaving over the last 6 or 7 years with the show, didn’t really want to waste those new costumes... so the cybermen started coming back again just a little more frequently until, by the time we got up to Sylvester McCoy’s stint on the show, they really were nothing more special than “monster of the week” and were, for all intents and purposes... really boring.

When the show came back under the Russel T. Davies era, the programme had been off the airwaves long enough to once more generate big interest at the return of the cybermen and, although the new design was somewhat juvenile (with a big C across the front) there was enough drama in the story to make their welcome return a success. When they went up against the daleks at the end of David Tennant’s first season, all the fans were into it because, well, ever since the early days of their first appearances on the show in the 60s, people had been wondering who would win a fight between a dalek and a cyberman.

But then the rot set in again. Not only did the cybermen keep coming back repeatedly to the show, but they were still cursed with that blasted C on the front of their armour. Honestly, I’ll never know why the BBC don’t learn about why it’s not a good idea to keep recycling the same costumes in close proximity. The Doctor travels in time as well as space... it’s completely impractical he’d keep meeting the same model of cybermen in different times just because the BBC don’t want to pay out for a new costume design, or rebuild any of the, much cooler, older ones for that matter.

But never mind all that. Neil Gaiman, one of modern fantasy’s great writers (his spin off from his own The Sandman comics, Death: The High Cost Of Living is one of the greats in modern comic book fiction) and who had a very successful episode of the show last series with The Doctor’s Wife (reviewed here) was promising to make the cybermen scary again and, to boot, the BBC were upgrading the design a little. So there was maybe a glimmer of hope there after all.

So was this episode of the show really a Nightmare In Silver or was it more of a bad dream in platinum?

Well I’m sorry to have to report, since I do admire this writer greatly, that for me it really wasn’t a show which was in any way scary or made me feel threatened by the menace that the cybermen should be seen as. It was definitely one of the less interesting stories of the second half of “series seven” although, that being said, it was still a damn sight better than the majority of episodes in the first half.

But, it certainly wasn’t a tragedy either. It was still entertaining and there were definitely some nice things going on in there. When the cybermen started moving very fast, almost like they were teleporting, that was a good sign and I was hoping for more in that vein but, alas, this advantage wasn’t pressed against the army defending the planet and ultimately, uneasy moments were few and far between.

But, like I said, there were some nice things. The Doctor’s ongoing battle of wits with the cyber version of himself in his head was kinda cool and it was a way in to show us that there was a memory block in his head when it comes to new companion Clara. There was also a reference, with Cyber Planner version of himself calling himself Mr. Clever, to the phrase that Clara’s various “apparitions” keep repeating... Run You Clever Boy And Remember... the initials of which make up the word CYBARR... except I don’t believe that "almost had me conclusion" for a minute. Moffat knew we’d all figure that out last year so I’m just assuming the lameness of that particular anagram is dead wrong. I hope.

There were some particularly nice scenes with Clara’s personality really coming to the fore (I think she may be River or The Doctor or possibly Rani or The Master, by the way) and it was really good to see the chemistry between her and Matt Smith working quite well. Also, there was a blink and you’ll miss it alignment of hordes of cybermen who make up the shape of an inverted question mark, just like the inverted question mark that hangs around Clara’s neck... so that was kinda cool. As was the introduction of the new upgrade of the old cybermats... namely the cybermites.

Add to this a very nice turn by Warwick Davis as someone who turns out to be a quite important character and some excellent scoring by Murray Gold, once again using variations of the cyberman theme he composed for their first appearance against David Tennant, plus a few nice appearances of the Eleventh Doctor sub theme, and it made for an okay, entertaining, close but no cigar episode of the show, which is fine. That’s my opinion anyway and it’s hugely disappointing that I didn’t like an episode penned by Neil Gaiman all that much.

And, of course, next week we have the final episode of the current series, which everyone is hoping will be the big reveal. Not of The Doctor’s name, of course. Nobody wants to know that and, frankly, I really hope they don’t reveal it. But hopefully something will come to some kind of conclusion with the current show's dangling story threads. This might, as it happens, even be the last time we see either of Alex Kingston or Jenna Louise Coleman in the programme. I hope not but there’s always that chance. I know lots of people, myself included, are hoping that the return of The Great Intelligence will somehow bring The Doctor’s old foe The Yeti out of hybernation... but something tells me that may not happen, I’m afraid.

Oh well. I’ll be trying to make it through to next weeks episode then... keeping myself alive for the sake of a TV show is as good a way of carrying on as any other I would guess. Hopefully I’ll see some of you here after for a major autopsy... if all things go well.
Posted by NUTS4R2 at 21:36