IT! The Terror From Beyond Space 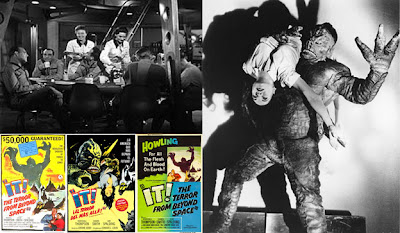 A manned mission to Mars meets with tragedy at the hands of... well, a martian. The only survivor from the initial mission is under suspicion and another spaceship, crewed by seven people, is sent to Mars to bring him home to Earth for a court martial and a firing squad. Nobody believes his story and thinks the man killed his entire crew... until they realise a murderous alien creature has stowed away on their spaceship for the return flight back to Earth and has started picking off the crew one by one and then pulling them into the ventilation shafts where it’s been hiding. Hmm... yeah, this does sound familiar doesn’t it.

You know, I really do like Ridley Scotts ALIEN but, like other famous scientifiction extravaganzas such as Star Wars, it’s really easy to see where he, or at least his writers, got the basic story ideas to glue together in their own inimitable fashion... pulled right from science fiction short story writer Jerome Bixby’s own screenplay for this movie. And, just as famously, from Mario Bava’s excellent sci-fi horror movie Planet Of The Vampires... in which the crew of a ship take a look around a starship stranded on a planet and find a large, dead skeletal alien pilot still on board. That the ship in Bava’s film used music as a control device would not resurface in the movies of Ridley Scott until Prometheus, of course.

Anyway, IT! The Terror From Beyond Space is a movie I’ve been waiting to get around to watching for over 30 years, and I’m finally glad I got to see it because it’s actually a lot less unintentionally funny than I thought it would be and is a nicely crafted sci-fi, “creature on the loose” style thriller, actually. Writer Bixby’s work was of the calibre that he even wrote a few episodes of the original Star Trek TV show and I think that’s kind of pertinent here because this does work as much as an ensemble piece of sorts as anything else and it does, to some extent, have the feel of one of those classic 1960s Star Trek episodes.

The acting is pretty solid for the time and, looking at the cast, I couldn’t tell you any of their names (except one which I’ll get to in a minute because I hadn’t realised he was in it until the end credits) but these are all faces you’ve seen dozens of times in movies and in gazillions of episodes of old TV shows over the years. The kind of relied upon actors who get called in to pretty much all the TV shows of their day and play a different character in one episode a year for them (once everyone’s forgotten them from the last time around). So no star names but all solid, reliable and confident performances from jobbing actors who were rarely out of work. Confident enough that they will have you fearful of a “not so realistic” man in an alien monster suit who is rampaging a few floors down from them.

And it turns out that the “man in a suit” alien is none other than Ray ‘Crash’ Corrigan, old Western hand and star of one of my favourite serials of the 30s, Undersea Kingdom! Which is basically a Flash Gordon serial rip off but, hey, it’s one of the better ones (asides from a few little factors... hmmm, I should review that serial some day). It’s nice to see the guy working but I felt a bit disappointed that the Atlantean robot busting Corrigan had been relegated to such a role, where you don’t even know it’s him unless you are told. Bit of a come down. Mind you, one of his early roles was as the orangapoid Buster Crabbe fought in the original Flash Gordon serial... so at least he had some kind of grounding in his kind of “acting”.

There’s some unintentional comedy in the form of some massive 1950s sexism near the start of the movie in a scene reminiscent of the dining sequence in Ridley Scott’s ALIEN, where the crew of the ship are all eating together. It’s kind of telling of the times that the only two of the crew who aren’t having their supper are the two female crew members. Why? Because they’re busy clearing the plates away and making meals for the men. This stuff is comedy gold but I’d better not say too much about it. It is, however, an interesting indication of the prevalent attitudes of the time.

The film itself is very short and comprises scenes of the crew slowly being chased up, level by level, in their rocket ship by the titular monster, who wants to eat them. The monster is kinda done quite well in the earlier scenes, mostly stalking and killing as silhouette shadows on the wall in the way that films did so well then... however, the director certainly doesn’t balk at showing the monster as often as required and when you get a closer look at it, well it’s nice but not in any way impressive as something that could really be alive and is, perhaps, a little less skillfully designed than the kind of monsters that were coming out of studios like Universal at the time. The Creature From The Black Lagoon make-up, for example, would have been hard to top even from the company that spawned him... and that certainly proves to be the case here, I’m afraid. The monster in this one’s expression of savage anger can easily turn to comedy if you are not in the mood for it, to be honest.

It’s also an interesting film in that it leaves a few plot threads dangling at the end. One of the crew members is trapped on a level with the creature and is asked to hide in the airlock at one point while the crew attempt to extract all the air from the ship... however, the guys face plate on his helmet is broken and we’re not enlightened as to whether he survived at the end of the movie or not. Also, at least one of the crew members, probably two, is infected by the creature with a condition which is very much like leukemia, which needs treating with blood (which you just know is going to be stored on the same level as the creature) and, although he gets the blood, you don’t really know if he and his sick companion are going to make it to earth or, whether the leukemia is in any way treatable or not. It’s something which is just ignored after its usefulness as a dramatic device to throw the humans back into the mix again with the creature has been fulfilled, but glossing over it as a minor detail didn’t really leave me satisfied as to the outcome, to be honest. Then again, of course, this movie is set in the far, far, far future of... um... 1973. So maybe by the time we get to that far flung year they’ll have developed a cure for leukemia. Who knows? Oh, wait.

But the film is effective enough and also has a charming B-movie style score to it by iconic composers Paul Sawtell and Bert Shefter (which is available from Monstrous Movie Music here). It all adds to the fun of the piece and the score CD is well recommended by me, as is the movie which is one I’ll definitely pick up to watch again in a couple of years. Maybe as a Christmas holiday double bill movie or something. Anyway, for any fans of fifties horror/sci-fi movies, this movie is grade A fun and you won’t want to miss out on it. So sit back, relax and watch it while the women folk do the dishes (as the film tells us this is obviously the way things are meant to be).