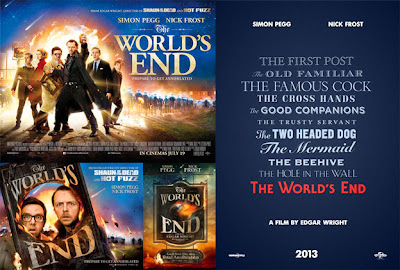 So here we have what has been loosely termed by it’s creators, depending on your source, as either the “blood and ice cream” trilogy or, making more sense after having seen the third one, “the Cornetto trilogy”... in much the same way that Sergio Leone’s first three totally unrelated spaghetti westerns were dubbed “the Dollars trilogy” when they promoted those films in the US, perhaps.

Now I seem to have a track record with products written by the director Edgar Wright and actor Simon Pegg in that, I usually “quite like” them the first time around but, when seeing them for the second time, I usually get more into it and embrace the thing wholeheartedly. This was the case of, in the order I watched them in, Shaun Of The Dead, Spaced (the TV show which ran for two series’ and pre-dated Shaun Of The Dead) and Hot Fuzz. I have to say that, given this puzzling relationship with their past work, I was a little trepidatious about seeing this one for the first time... although, of course, I knew I’d probably love it the second time around.

Well, I have to say, that pattern has finally been broken by their new movie, The Worlds End. While I’m sure I’ll still love it the second time around, I am happy to say that I was also was quite fond of it the first time around too, and had a thoroughly good time with it at the cinema last night... although I didn’t bring it flowers or take it to dinner before it manifested itself before my eyes in my local flea pit, to be sure.

The Worlds End tells the story of a larger than life character, Gary King, played by Simon Pegg, who gets his old school buddies together for a reunion 20 years or so later, to have another crack at “the golden mile”... the epic crawl of 12 pubs culminating in the final one, The World’s End... a task at which they’d failed at miserably “back in the day”. Unfortunately, Gary’s comrades in arms, played by Nick Frost, Martin Freeman, Eddie Marsan and Paddy Considine respectively... with the added touch of glam and sprinkle from Rosamund Pike as the film’s leading lady... are not exactly big supporters of Gary anymore. But, as you know they will, they go with Gary to start their epic journey and, as it turns out, instead find themselves in jeopardy fighting most of the town who have been replaced with alien simulucra.

What can I say? Wright and Pegg basically take the classic plot of Invasion Of The Bodysnatchers, add in a classic British obsession (pubbing) and riff on the collision of these two ingredients throughout the whole movie while not forgetting that all important element that makes you feel and root for all the characters... a touch of heart.

And not only that... they don’t really drop the ball throughout the whole thing and they do it all very smartly.

It maybe takes a little while to get going on the set up but only because the characters are slightly more complex than usual for these writers and you want to understand how they’ll come to work together (which is why I suspect my second viewing will be even more enjoyable), but all the way through the wittiness of the dialogue is crisp and even (if not always especially deep*) and although my main comedy enjoyment usually comes, almost exclusively, from either The Marx Brothers or Woody Allen, I have to say that when you get Wright and Pegg together, they continue that kind of cool cleverness with syntax and terminology that lights my fire when it comes to this kind of word play.

There are also some good fights in it.

No joke, there’s some great set-piece, full-on, blue-blooded alien gore, pub brawls in this which will knock your socks off. And with blue being the colour of the blood on the menu, they manage to do it all behind the censor’s backs, as it were, who must have been too conditioned to looking for signs of crimson to notice the huge amounts of violence contained within a 15 rated movie... but that’s okay by me. Although I was disappointed that Wright and Pegg didn’t put a paraphrase of one of their famous Shaun Of The Dead recurring jokes in it... I was just waiting for the line... “You’ve got blue on you” but, unless I missed it somewhere, it didn’t happen. And like their last collaboration, Hot Fuzz, it’s even got an unexpected, for me at least, Bond villain... and I mean, Bond/villain. You’ll see what I mean.

My one real complaint though is, after finishing the film off with an almost perfect ending with Nick Frost’s character telling the tale of what happened next (which also includes this film’s nod to Cornetto), they elected to put one final scene in with one of the main characters which, while it was okay as a set up for something else, could have left a much stronger ending without it. But that might not have been commercially the best ending, especially in other countries, so I can understand why they did this.

So that’s all I got to say then, I think. Other than the sound design and choice of music is incredible (and relevant to the on screen shenanigans in a rather integral manner at one point near the end) and it was also nice to see modern art getting some legs on it, which I’m not going to spoil for you here, you’ll just have to live with my mundane attempt at being cryptic and go and see the thing for yourself. All in all, a good night at the movies and certainly a lot more fun, I suspect, than attempting to get through “the golden mile” in real life. Go drink your celluloid fill.

* I hate the word deep, but it was the only way I could make my lame pun work and still convey my exact meaning... so cut me some slack, okay?
Posted by NUTS4R2 at 17:15