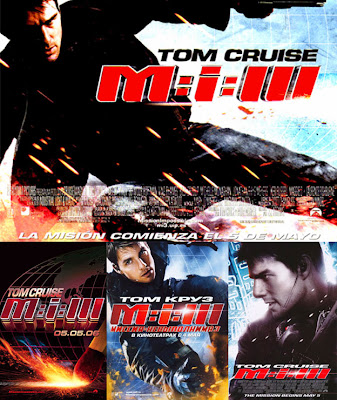 Warning: Okay, so this one will need to have spoilers
in it so I can talk about why this movie doesn’t work.

So here I am again, continuing with my Mission Impossible catch up, enforced by my dad. This third one came out 6 years after the last and I have to say that I am not as completely enamoured of the director of this one, as everyone else seems to be. I find it strange that each of these movies has a different director and they all bring to the gig their own specific visual style as opposed to seeking any continuity with the last one. Oh well, I guess that’s true to the nature of an episodic TV show of the time too, I guess... although I think it’s less obvious when you get less known directors who are happier letting the style of what’s been done previously dictate the art direction somewhat.

This starts off with a really strong opening scene which, I’m afraid to say, is also its biggest weakness. Here we have a captive Tom Cruise being interrogated, with his girlfriend tied and gagged in front of him while Philip Seymour Hoffman plays a really nasty character who counts up to ten and then shoots Cruise’s love interest right in front of him. It’s all thoroughly nasty and, therefore, thoroughly effective. Lot’s of problems here, though, which serve to highlight the main trouble with all of the entries I’ve seen so far in the series... it’s all too damned obvious what’s really going on.

So lets look at this opening scene shall we?

It’s got the lovely Michelle Monaghan in it playing Cruise’s leading lady. The producers are probably not going to waste her in a movie where she gets killed off before the opening titles have even started rolling... so you more or less know, due to the way this scene ends, that this is a flash forward to a later point in the narrative which we’ll be rejoining later in the film. Now Michelle can’t be another character wearing a mask because we can see very visibly she’s not wearing a throat mike except... oh yes she can... because they’ve taped her mouth shut so she can’t speak. What does that tell us? Well it tells us the director doesn’t want us to hear her voice as she isn’t wearing a throat mike... which means this woman who gets shot definitely isn’t Tom Cruise’s leading lady. So that’s that then. It’s all too obvious and drains the scene of any tension it might have had when we rejoin it towards the end of the movie. Really silly idea starting out with this scene, I think. It tipped me off straight away and also tells me there’s going to be a scene where Cruise’s wife (as she is) gets snatched. Damn silly.

Unfortunately, after the scenes which you just know you’re going to get establishing Michelle Monaghan’s character and a really cool action sequence where the rescue of an agent behind enemy lines goes horribly wrong (pretty much the best action sequence in the movie... it all goes down hill after that point in terms of on screen excitement... or at least that’s how I felt about it) the movie continues in using this same kind of policy of pointing out and showing you all its cards before any of them are actually played out.

Even in the first action scene we are shown an attempt to neutralise an explosive charge in a person’s head so we know Cruise’s character will be okay at the end of the movie (we are told that he has one in him during the pre-credits sequence so you are pretty much waiting for them to establish how to get one out or neutralise it as soon as they can). We are also given a new character played by the excellent Laurence Fishburne who is pretty much set up as a villain straight away and, since this is the way he’s been set up, you pretty much know he won’t really be the villain and straight away suspect Ethan’s friend/director character instead. This is pretty much spelled out in big letters for you when they trace the call of the lead villain directly to Fishburne’s office halfway through the film... from then on in you wonder why the filmmakers are trying to be so obvious with their misdirection and you know that Fishburne is almost certainly one of the good guys.

So yeah, this is the film where, like the first two movies in the series, I was just waiting for the penny to drop with the main characters for far too long again and kinda got bored waiting, to be honest. This is definitely my least favourite of this franchise so far because, well at least the second movie had fantastic cinematography and truly beautiful music.

Talking of music, I like Michael Giacchino a lot but the score in the mix in the context of the movie is a bit rubbish, to be honest. There was one cue in it which really made me stand up and say to my dad that this is why movie producers hire Michael Giacchino... because he’s really great at copying other people’s musical styles. And that cue I was responding too really did sound like it was coming from a 1960s TV show and it definitely hit all the right points for me. Unfortunately, when watching the end credits I found that this piece was, in fact, part of Lalo Schifrin’s underscore for the original series (quite apart from his main Mission Impossible theme tune which is used in every film in the movie series anyway) and so it was Schifrin’s original cue that I was responding to. Still, Giacchino is a cool composer and I look forward to receiving his score in the post soon so I can hear it without a layer of bullets and explosions over the top of it and evaluate it in a more ideal circumstance (even though that’s not the use it was originally composed for in terms of its primary function as a component element of a big movie).

Having said all this... it’s got a few nice things in this movie too. Seeing a mask sculpted and made and then collecting a voice for the throat mikes in the field at not very much notice is all very interesting and the performances of the cast in this are all pretty cool... to the extent that they’re allowed to be... seeing that the script manages to telegraph every little twist at least a half an hour before. The “one eyeball pointing one way and the other wobbled in another direction” death face of the young agent Cruise loses in the early action scene is also impressive in that it’s a neat idea of showing that something exploded inside her brain without actually demolishing the exterior of her head and because it’s also quite disturbing. It’s a very powerful piece of imagery and the camera does dwell on this a couple of times to get maximum usage from it. So that’s pretty good.

There’s no need, though, for yet another “Tom Cruise is left dangling” homage to the first movie (just like the last one did when that original sequence really wasn’t that great in the first place). What were they thinking?

All in all, not my favourite Mission Impossible film and, even though they were just as obvious, the first two definitely have more edge to them than this one, I think, in terms of both watchability and visual splendour. i guess I’ll be watching Ghost Protocol soon then.


Mission Impossible at NUTS4R2
Your mission, should you choose to accept it, is to click on one of the titles below to take you to my review.