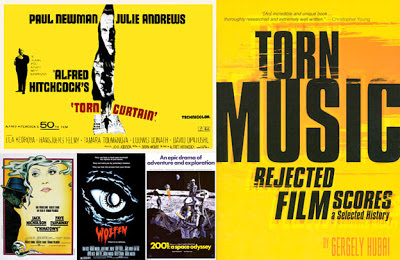 Remember David Rose’s score for Forbidden Planet? No? How about Graeme Revell’s score for The 13th Warrior? Or Mychael Danna’s score for Hulk? Not ringing any bells?

Nor should they, but all of these films, among many others, have fallen foul of one of the more controversial aspects of cinema history... that of the rejected score. Which is a shame, actually, because sometimes, perhaps even often, the scores which are thrown out are either better or at least as good as the compositions written to replace them.

This is what happens to perpetuate this practise in a lot (but not all) cases where this happens.

A rough cut of the film is shown to a test screening/preview audience and they are asked to comment on it. If a film doesn’t test up to a studio’s expectations (and there’s a lot of rubbish being made these days, don’t forget) then the people in charge of production need to do something about it. And when I say they need to do something about it... what I really mean is they need to be seen to be doing something about it. By this time, though, the film is all shot and reshoots for your actors can be extremely expensive, even if the actors schedules happen to miraculously match up to when you want to reshoot the footage and the sets or location haven't changed in any way. So the people in charge decide to fix the cheapest thing they can think of and... yeah, that’s right... blame the bad test results on the musical score. So what happens in most cases under these kinds of circumstances is that the original composer who has been on the project for a while is fired and another composer is brought in to compose, arrange and record a completely new score within a matter of weeks/days and this is then deemed a sufficient enough effort to try and “fix” the movie. It probably doesn’t always pan out like that exactly but from what I’ve read in various industry news pieces over the years... that’s pretty close to what happens a lot of the time.

And there have been some really hefty stories over the years, some of them very well known such as...

Alex North’s original score to 2001: A Space Odyssey being rejected and replaced with the original rough cut temp tracks.

Jerry Goldsmith’s shabby treatment at the hands of Ridley Scott concerning his written and replaced and spliced and diced cues for both ALIEN and Legend (in the case of ALIEN, for which he wrote a fair few alternate cues too, some of his score was replaced by some of his own music in the final cut from his score to Freud).

Philip Lambro’s experimental score to Chinatown, which was rejected and replaced with Goldsmith’s classic score.

Bernard Herrmann’s score to Torn Curtain (where this book obviously takes the inspiration for its title) which was thrown out by Hitchcock before it was all even recorded and which caused the rift which stopped them working together ever again, after a very productive and, some may say, perfect composer/director artistic relationship over the years.

Lalo Schifrin’s score for The Exorcist, replaced by Penderecki, Ligeti and others... including brief excerpts from Mike Oldfield’s Tubular Bells, of course.

And also, one of the more high profile replacements of recent years, that of Gabriel Yared’s score for Troy which, after he’d been working two years on it, was rejected due to test screening cards and replaced with a rush job James Horner score within a matter of weeks. Yared was, understandably, very upset at the time... so much so that he went public with his rejection and put clips from his recorded score up on his web site. He was forced to take it down by the studio behind Troy very soon after although, a bootleg CD of his original score was quite easy to get hold of at the time (I’m not saying anything except, perhaps, to add that his original score sounded pretty marvellous to my tin ears). But I guess the studio must have thought it was a case of: if at first you don't succeed... Troy, Troy again.

These and many other stories, some powerful miscarriages of justice and others, probably a good call, are detailed in Gergely Hubai’s Torn Music: Rejected Film Scores, a Selected History and I have to say I certainly never expected to see such a volume in print in my lifetime, given the barbed nature of the subject matter.

The book is stripped down into around 300 chapters, one for each film score covered, ranging anything from half a page to four pages per chapter. These are presented chronologically from Max Steiner’s 1932 replacement score to the classic movie The Most Dangerous Game, all the way up to the solitary video game included as a nod to this trend continuing in the future... Steve Jablonsky’s replacement score for Gears Of War 2. Although the 300 scores are covered in detail in some very frank and informative sections, there are many other rejected scores named (and shamed?) as asides to the main text and even in his introduction, Hubai notes that 300 is just the tip of the iceberg and the book also includes some interesting TV score replacements as well, for such shows as Columbo and Doctor Who.

There are a couple of criticisms I have, the main one being that every now and again, something is represented as fact when it’s plainly incorrect. When covering Joel McNeely’s replacement score for The Avengers, for example, the writer incorrectly states that Diana Rigg was one of a few actresses who played the part of Emma Peel throughout the show’s history... when in actual fact the other actresses to play “Avenger girls” were all playing uniquely different characters. But asides from a few moments like this, the text is always warm and engaging and not scholarly enough to frighten off the casual reader while still retaining a wealth of information about the subject in hand.

My second criticism of the book not catching all the score releases is not really fair, I think. Because the timing of the book is such that it happened to be released in a year when a lot of rejected scores were given a limited commercial release (Chinatown, Wolfen, The Last Hard Men etc) and where, in a lot of cases, the author has kindly highlighted where portions of the rejected scores may be heard, either as commercial releases or reworked into other scores, the timing of the book was such that a few of the newer releases slipped by between the writing and publishing stage, is my guess.

All in all, though, this is not only one of the best books written about movie scores (and I’ve read a fair few where the authors just seem to be making it up as they go along) but also the only book, as far as I know, written on this particular specialism. To sweeten the pot for film score fans I should probably mention that the book includes a foreword by one of the more important names in modern movie scoring, Christopher Young, but even without that sweetener, it should be recognised that for anyone into film composition and the politics at work behind these works of art, this is an absolutely essential purchase. An amazing read.