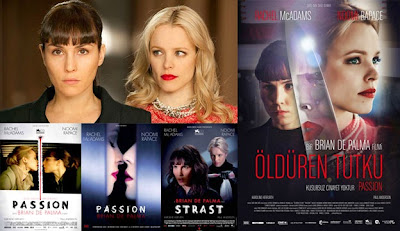 When I first heard about Brian De Palma’s new film Passion, I was positively chomping at the bit to see it. I waited and waited for a cinema release in this country. Then I bought the soundtrack, for reasons I’ll explain later.

Then more waiting and waiting.

A year later... I decided to take the opportunity a friend gave to me of watching the thing because, frankly, I’m still waiting for it to get a release in this country.

Unfortunately... it turns out I’m not in the best of shape to be able to properly review it for you... but I’ll do my best. The problem, you see, is that once I was half way through the opening credits to the movie, I found out the film is a remake of another film from 2010 which I'd not seen, Crime D’Amour (aka Love Crime) and I really don’t like to see remakes of other movies, especially when the source material usually turns out to be way superior these days to the remake.

But, since I’d waited so long to see it, I pressed on and I will do my best to give you a flavour of it, even though I can’t make the comparisons which need to be made.

The film stars Rachel MacAdams as Christine, an advertising executive... and Noomi Rapace (the original version of The Girl With The Dragon Tattoo) as Isabella, one of her team. Christine likes to be the centre of attention and rule the roost and she takes credit for people’s ideas and uses them as stepping stones for her career, even the victimised Isabella who she wants to also be her lover. She is played, pretty well, as a completely unlikeable bitch by MacAdams and, though I just wanted to punch her throughout the course of the movie, credit to the actress in question for making me feel this way about her. Special praise also for the marvellous Rapace who plays the top/bottom/top/bottom character in this relationship, as various elements in the convoluted plot unfold.. and also to the actress playing Isabella’s personal assistant, Danni, performed by Karoline Herfurth who was so good in the vampire movie We Are The Night (reviewed here).

The convoluted-to-the-point-nobody-cares-anymore plot is, to be honest, very typical of De Palma’s early work, back when he was making vital and brilliant, highly personalised Hitchcock variations like Sisters, Dressed To Kill, Body Double and the like and I can certainly see what attracted him to this material. If anyone is going to get the most out of this kind of subject matter it’s De Palma... I just cant tell you whether he did a better job on it or not because, again, I haven’t seen the original version of the film (yet).

What I can say is that it is very well directed by De Palma, who shows his natural flair for mise en scene (the room to room colour palette changes are great) and gets some good sequences from his actors. The whole ting looks very smooth and, as usual with De Palma, there isn’t complete resolution at the end of the movie. He, once again, delves into dream sequences with some of the characters and by the end of the movie you’re not always sure, at least I wasn’t, where the dividing line between the dream space and reality is and which version you are currently in. For example, when he reintroduces the concept of one of the characters having a twin sister I thought we were immediately going to be pushed back into the same kind of world as his absolute masterpiece Sisters from 1973. Instead we are taken somewhere else as far as that character is concerned... I just wasn’t sure, by the end of the film, where exactly.

This is not a weakness of the movie, though, it is a strength and it will be interesting to see if the original version of the movie makes use of a twin sister within its plot line too.

The very important thing about this film, and the reason why I gobbled up the soundtrack so quickly, is because this film marks the return to collaboration of one of the most enjoyable composer/director partnerships in screen history, with the score to this one being composed by Pino Donnagio and, although not totally what I would expect, it does in very many places capture that old, early 70s neo-giallo style of movie making that DePalma and Donnagio used to be so good at. In terms of the music, if you’re a fan of this composer and director working together, then you should probably take a look at this one so you can hear the score in context.

At the end of the day, the performances, direction, editing and music are all up to scratch here... I just somehow felt underwhelmed by it. I would, however, firmly place it within the realm of De Palma’s other work in this genre and so, if you like stuff like Raising Cain, Femme Fatale and the other movies I mentioned earlier, then you’ll probably want to take a look at this one also... although I feel it’s probably the least compulsive of these particular films. Not a terrible film by any means.... stylishly shot and expertly handled... I just felt a little bit bored by a lot of it and felt that Soderbergh’s Side Effects (reviewed here) tackled a similar area of betrayal and intrigue in a much more effective manner. That being said, however, I wish De Palma would make more films in this mould as I think this is definitely the genre in which he can work his best miracles of movie magic. Hopefully more people will get the opportunity to see this sometime soon.