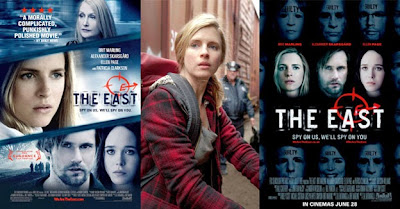 Warning: Light spoilers in this one.

Okay. So I’m gonna find it hard going constructing a review for this particular film because The East, as it turns out, is almost a perfect movie going experience. A film of some small but not insubstantial power and put together with a kind of European sensitivity, applied to an almost Hollywood package.

Now I’ve seen this movie described as a thriller or an eco thriller by a number of people but, to be honest, although there are a few sequences of tension scattered throughout the whole shenanigans, it has to be said that it’s more of an environmental awareness and bonding movie which just happens to use some of the trappings of the post-forties thriller movie within its chemical make-up, to hang a narrative around the central idea of a main protagonist whose world view changes when she comes into close contact with, for want of a better terminology, a bunch of eco terrorists.

The main protagonist, Sarah (played by Brit Marling), is an undercover spy for a big private security firm (the type of firm who are kind of on a level with the FBI etc) and her job is to find a new eco terrorist threat group called The East and penetrate them to a level where she can gain intelligence (and possibly avert disaster) for some of her boss’ high level clients. As such, all the common spy gimmicks like false cover phone numbers, hidden shoe phones and the like are employed, quite neatly and pretty much unobtrusively, as it happens, throughout the main narrative thrust of the movie. I can see why these kinds of tropes were used, to be honest. Modern audiences are more likely to go see a movie which claims to be a thriller rather than a huggy, clean environment cult movie... so that kind of misdirection gets my vote. I only saw the movie, to be honest, because I’d actually seen the trailer for it (for once) and I loved what I was seeing... though again, the trailer is pretty much mostly culled from the first five minutes of the movie and makes it look much more of a documentary than it actually is.

The direction is assured and the editing superb. Combining a variety of styles to give it the cinema verite feel it lacks in actual content, ranging from slow but hand held camera work to fast cuts and a series of montage sequences comprising still photographs taking relevant points to tell its... well story is probably not the right word here, but certainly it gives you a sense of what the director wants you to get into your head.

The performances are also absolutely amazing, with Brit Marling being outstanding and ably backed up by Alexander Skarsgard (who really is becoming as much of a name as his famous dad), Ellen Page, Toby Kebbell and, my real main reason for seeing this film, Patricia Clarkson, who does an excellent job in, sadly, only a few scenes scattered throughout the movie, as Sarah’s unflinching boss.

My two slight criticisms are as follows.

The movie at one point plays out the old “Parable Of The Long Spoons”... that’s the one where the people in Hell starve because they can’t work out what the people in Heaven, in exactly the same circumstances, have worked out... you can feed each other and get to the food. I’d be really surprised in this day and age if people are not familiar with this old story, which used to do the rounds everywhere, and so I found it odd that the drawn out sequence (which is a kind of task set as an initial indoctrination into The East) is kinda played for tension and surprise... when the solution is so obvious. Also, since the solution is so obvious, one wonders why a sophisticated employee of a security firm such as Sarah would not already know the solution to her predicament. This kind of stretched the plausibility of the character a little for me, it has to be said.

My only other gripe is with the narrative element of the film. It uses this thriller narrative to hook people into the real issues and that’s fair enough... but did it have to be so obvious a narrative? Honestly, as soon as the leader of the cult said that their would be three jams (aka terrorist hits) involving big companies, it seemed pretty obvious to me what the identity of the third company would turn out to be and the moral dilemma it would place on one of the central characters in the movie. However, the nice thing about the ending of the movie... the very ending after the leader of The East has fled the clutches of the FBI, is that the main protagonist presents you with a third narrative option that I didn’t really figure out. Don’t get me wrong, it’s no mind blowing twist or reveal... that’s not what this movie is about. But it is a nice option and makes for a slightly under-the-radar ending and certainly it helps elevate the movie to something I found really solid as opposed to relying on yet another structural cliché.

The East is a youth movie about the kinds of concerns that probably should be important to people. It’s message is sound and, if the character dynamics are a bit hackneyed, it doesn’t really matter because the execution of these clichés is, for the most part, impeccable. Definitely a solid watch and a strong recommendation from me. Head east if you want a slice of morality served up with your entertainment.