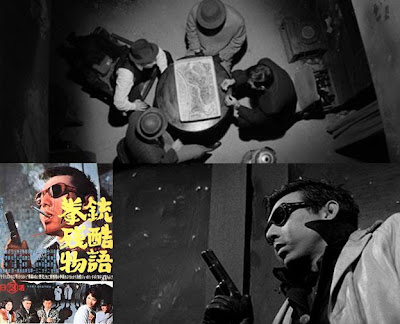 The Heist Is Right

Warning: Cruel but minor spoilers within.

A darkened garage by night. An overturned car with a fountain of water from the burst hydrant it knocked over after ramming its way through the doors, hitting the car trying to break out of the garage going the other way. Shots ring out. Muzzle flashes flaring in the dark as the sound of hurtling bullets punctuate the pitched gun battle between one group of criminals and their former leg men.

This is the typical audio/visual currency of a mid to late sixties Nikkatsu crime picture but the fact that it’s not unique in the canon of this particular sub-genre of kinetic Japanese action cinema makes it no less special.

The film headlines Jô Shishido, known as “the chipmunk” due to the surgery he had to enhance his cheeks and perhaps best known to a Western audience for his association with master director Seijun Suzuki on a number of films, including Youth Of The Beast (filmed the year before this one), Gate Of Flesh (filmed the same year as this one) and, of course, the infamous Branded To Kill. In this movie Shishido is “retrieved” from jail two years early (he’s in there for crippling a guy who had crippled his sister in a hit and run road accident) by a gang of criminals who are recruiting him for a security van robbery as it leaves a racetrack. A team is put together for him and, after rejecting one guy after getting him to talk about the secret job, the film heads in the direction of a standard caper movie and, if anything, it conjures up images of Richard Stark’s character Parker more than anything else in tone and style.

And it’s a really great “caper gone bad” genre offering, as it happens.

Shishido plays a tough cookie, but one who agrees to do the job to be able to afford an operation to try to help his sister walk again... which at least gives the audience a sympathetic response to his character and leaves us no doubt as to who we’re supposed to be rooting for. As he runs down the specifics of the job, involving re-routed traffic, a tampered security radio, the death of four security guards, the disposal of the van and bodies etc, we see the job play out under his narration as it’s supposed to go... that is, according to plan.

But it doesn’t take much to figure out this kind of movie heist never goes to plan and it’s not long before the gang are back at a garage lair trying to pry two security guards from behind their bullet proof glass in their locked in van. While Shishido goes to report the limited success to his boss, he is double crossed and legs it back to find that his friend, one of the gang, has been nobbled and the rest of the gang trying to double cross him, to boot. It doesn’t take much to 'take care' of the two gang members but it also takes no time for the main gang, for whom the job is being carried out, to follow him back and get into the pitched gun battle I described in my opening paragraph.

From then on things get a little less typical since the gang recovers the money but not Shishido, who responds by working for a rival gang and kidnapping the former bosses son. Add in the seasoning of a few other characters... Shishido’s good hearted friend, Shishido’s new “gal” who also becomes an unofficial part of the gang, and Shishido’s direct controller on the job who is working both for and against the gang’s boss... and you have a bleak concoction shot in striking black and white which, by the final scene, turns into a bit of a bloodbath in that special kind of “nobody gets out of this job alive” kind of way. It’s no fun to be a character in this movie.

The writing is almost as crisp as the shots which are composed within a 2.45:1 (really?) aspect ratio and those compositions are pretty darned crispy. Beautiful designs flow across the screen using a trick I’ve seen used dozens of times in Japanese (and often Italian exploitation cinema) over the years, that of using vertical set decoration to chop the screen up into separate frames and use these frames to highlight the characters and sometimes pitch different spacial relations against each other. It’s good stuff and makes a cracking paced film even better.

The music by composer Masayoshi Ikeda is also quite brilliant and propulsive, using various sounds to punctuate accents of the on-screen action in the quieter scenes and just generally getting very loud and taking the lead whenever it really needs to comes out to play. The opening title music, for example, is big and audacious and, if I were listening to it without the context of knowing what the movie was about, I’d have to guess that it would be more appropriate for scoring a mid 60s Gojira/Godzilla monster mash up than a bleak crime drama.

It’s all pretty cool and the plot line goes the extra mile when it could have been wrapped up a little more quickly and takes you into a series of gun battles which almost leaves the film bereft of any characters... I can think of only one, but I’m not going to tell you who it is.

Cruel Gun Story is a film which has clearly defined heroes and villains... but none of them are really any good when it comes right down to it. Almost everybody is bad and the characters’ status as to which side of the light and dark they are on becomes more a question of which shade of grey they are at in their lives. A wildly entertaining movie and definitely another strong recommendation from me... this is part of Criterion Eclipse’s Nikkatsu Noir collection, which I would urge all lovers of cinematic brilliance to pick up. I’ve seen four out of five of the movies in this set now... and they’ve all been pretty amazing.