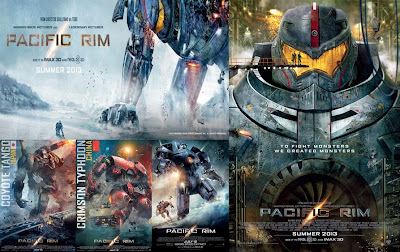 Guillermo del Toro’s Pacific Rim is basically a giant monster VS giant robot “bash ‘em up” of the specific kind which started out life in the 1954 movie Gojira (aka Godzilla) but which, in fact, became more into its own in this form in the series of movies which followed on from that initial Big G outing from the 60s through to the early 70s and then again for the next two waves of related films (plus in every kind of official and unofficial spin off from those ever since). Del Toro is quick to play up that analogy, not that we needed it, in the first few seconds of this film.

Kaiju, it tells us, is a Japanese word for monster and Jaeger is the German name for hunter.

Of course, what we have here, right away, is a double pun from Del Toro.

The actual genre of Japanese film which encompasses all these giant beasts is Kaiju Eiga, a term I expect most of my readers are not unfamiliar with and which is literally translated as “monster movie”. The Jaegers which are the giant robot machines of this movie are apparently pronounced with a silent J, giving them a 'y' sound. So, kaiju jaeger = kaiju eiga. That’s the first bit of fun in the film.

The other little side swipe of a joke within that, of course, is that Jaeger also looks like Jaguar, as in Jet Jaguar, who was probably the most influential (if not the first, although I suspect probably the first too?) of the giant monster fighting robots, making his debut in the 1972 film Godzilla Vs Megalon and much copied since then (you wouldn’t have stuff like Shogun Warriors, Transformers or even The Mighty Morphin Power Rangers without him... although I’m not sure that’s a good thing, to be honest). So that’s what all these giant robots are stand-ins for... they’re all Jet Jaguars. Hence Jaeger...so there you go, fun pun number 2.

Now I find Del Toro a bit hit and miss as a rule and tend to like his big commercial movies such as the Hellboy series rather than his smaller stuff, like Pan’s Labyrinth (goodness knows why I couldn’t appreciate that film... it had everything I’d want in a movie in it except, perhaps, for something which could trigger an emotional response in me) and so Pacific Rim should have been right up my street... and it kinda was. I just didn’t have as much fun as I was expecting from it... and certainly not as much fun as other people have, by the sounds of it.

Looking at it, it might be my response to Del Toro building an absolutely credible world from his ridiculous premise and then further populating it with a cast of actors who are absolutely convincing and, with the exception of Charlie Day, Torchwood’s Burn Gorman and the ever watchable Ron Perlman, totally serious and in no way tongue-in-cheek when it comes to playing their parts. This means I was totally watching it with my serious head on for a lot of the time, except when the three actors above were hamming it up beautifully in their scenes. I was thoroughly invested in the characters in this film and also the stakes they were playing for (the end of humanity) and that’s certainly not a bad thing... it just didn’t feel like fun, is all.

This is not, of course, to say that Pacific Rim is a bad movie. It’s certainly not a terrible film and it is a thing of spectacle and, to a certain extent, wonder. The fight scenes with the jaegers left a lot to be desired in that I couldn’t figure out what was going on half the time, though. The editing was just too... um... choppy for me. But I could get a sense of it and it all looked mighty impressive. Also, the relationship between the two main protagonists played by Charlie Hunnam and Rinko Kikuchi was good but I would have liked to have seen a lot more of it and developed the underlying romance that was obviously there between them. I would also have liked a lot more fleshing out (there was a little of that but not enough) of Idris Elba’s character, who is another actor who tends to dominate whatever movie he’s in.

I think this highlights my main problem with the movie actually. Everything was just not quite enough. Especially since the story I thought the film was going to tell was completely dealt with within the first ten minutes of the movie as a pseudo recap to get you up to speed with the world these characters live in. However... after doing that the first time, the film then did proceed to tell me exactly the same story again, but with more urgency to it. I wish, in fact, the film could have been the story which is described as it was in the first ten minutes, because then we could have had the appearance of the initial kaiju monsters and the move towards the construction of the jaegers to deal with them and, from them, a champion set of pilots could arise... and this film we have now could have been the inferior sequel.

But... I don’t want to stomp all over this movie Tokyo-style because Del Toro has realised a great achievement here and he’s got something which could re-trigger a resurgence of kaiju movies, if we’re lucky. Also, Perlman’s performance as Hannibal Chau is pitch perfect and as over-the-top as you’d like. It’s worth the price of admission on its own, never mind the monster robot carnage... which is at least better handled than the action sequences in the confusing Man Of Steel from earlier in the year. Saying that, there’s a big underwater battle towards the end which had me totally baffled as to 1) how the things taking place could be happening under water and 2) how the sound design for the under water sequences made any sense whatsoever. Seriously, the lack of “physics logic” kept popping me right out of the movie during these sequences.

On the other hand, the musical score by Ramin Djawadi (no stranger to composing music for characters in metal suits) was one of his best scores to date and will be an interesting listen as a stand alone element, I suspect. It held its own fairly well when pitched against the “noisy as hell” sound design in most places, so that’s definitely doing its job as well as it could under such circumstances, I would say.

Pacific Rim succeeds as a film, I think, but I’m not sure its the kind of film which would bear much repeat viewings. All in all, I’d personally be watching classic stuff like Invasion Of The Astro Monsters or the original version of Terror Of Mehagodzilla, truth be told, but I think Pacific Rim will certainly find an audience that loves it and may even become a classic itself for future generations. Not a bad movie to spend time with on a weekend I think although, if you are going to go see it, make sure you stay sitting tight until halfway through the end credits for a great little reveal scene. It might be important if they get around to making a sequel.