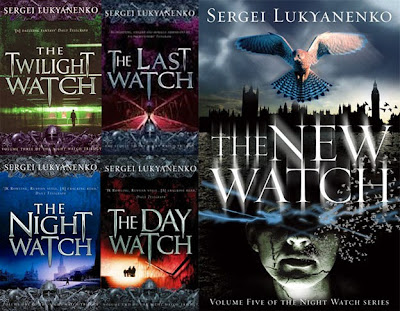 Back in 2004, director Timur Bekmambetov made a movie called Night Watch which caused a bit of a splash at the time, seeing as it was a big budget Russian fantasy movie which was kind of beating Hollywood at it’s own game. It was, to be fair, quite an impressive movie but a little flimsy in story line in places. I found the sequel that the same director made, which was released a couple of years later, called Day Watch, to be a lot better but some of it still didn’t really hang together in the way I would have liked... when I read the novels on which these two movies were allegedly based, I found out why. There’s certainly a little more of the original works, although by no means all, showing through in the sequel movie.

When I finally got around to reading these stories from about 2006 onwards, I finally realised that the movie adaptations were not just competing with Hollywood in the “budget spectacular” stakes. They were also very much competing in the “how a major budget motion picture can completely screw up the process of adaptation and change it so much that the storyline becomes almost completely unrecognisable” stakes too. Which is a shame, actually, because the casting of the main characters was pretty good. However, Bekmambetov and his team seem to have grafted their own story onto the whole thing, to do with the lead protagonist Anton Gorodetsky’s son and the way it will effect the future of the world. To give you some idea... Anton Goredetsky doesn’t even have a son in the novels... that whole plot line was an invention for the movie versions.

The other big revelation I had when I read the first four novels... slowly, as they finally got released in English translations year by year... is that the movies pale into insignificance next the sheer brilliance of the source material. The five novels in the series so far are... The Night Watch, The Day Watch, The Twilight Watch, The Last Watch (which I think everyone thought would be the last in the series as it concludes a fair few strands of storyline in the final few chapters) and now the latest in the saga, released a couple of months ago... The New Watch. And I have to say that my fears that this would be a hastily written tag on to the series to make money were thrown out the window as soon as I got involved in the plot.

The Night Watch series of books is a very special series. I’ve not read anything with quite the atmosphere created here in the whole of fantasy or science fiction. They are each divided into three stand alone stories, usually told in first person narrative by the cynical hero of the series, the aforementioned Anton Gorodetsky (but not always, although that character appears in nearly all of the segments in one way or another). By the end of the first book the stories are brought together and reveal themselves to be one, very cohesive arc and the subsequent books conform to this pattern and also, of course, add the previous book’s main arc as part of one continuing arc. The hero is usually manipulated into situations and decision processes which usually end up with him turning out to be a pawn between his boss in the Night Watch (the light other magicians) and the head of the Day Watch (comprising the dark magicians who are more inclined to evil, although the wafer thin line between good and evil is furiously emphasised and discussed the more the series continues).

To my mind, they have the feel of both something magical and child like, like I imagine the Harry Potter books to be, but advanced into an adult state and mixed up with something like Adam Hall’s excellent Quiller series of books in terms of bleak, depressing, no nonsense story telling. It’s a very curious blend but it just works so perfectly. Another easy analogy might be John LeCarre meets J. R. R. Tolkien but... well, you get where I’m coming from.

In the novels, Anton and his co-workers are all magicians ranging from 7th to 1st level practitioners, their status depending on how far they can travel into the “twilight”... a series of magical reflections of the world connected to each other like Russian Matryoshka dolls, with sinister blue moss growing everywhere and which provides the magicians with their powers on all the versions of the world, including the one we live in (although in our level of the world, the blue moss is invisible). In The Last Watch, the twilight itself was under question and the fate of the world was again in the balance... but one of the characters, and I’m not telling you which, found a way to climb past the accessible levels of the twilight and into a revelation which I surely won’t reveal here.

In The New Watch, we again follow the day to day adventures of Anton, along with his wife and daughter (one of whom plays a special role within the narrative outcome, once more) and we also have the return of a character which has become, by the end of the novel, Anton’s personal Moriarty kind of character... or at the very least, his Irene Adler substitute. And that’s all I can tell you of the plot and what happens. These books are so good you are going to want to read them yourself to find out what the fuss is and I’m certainly not going to spoil them for you.

What I will say though is that this book has started in with even more references to contemporary pop fiction (not to mention Russian pop music) than the previous one. To give you some idea... one of the previous books had one of the characters dreaming about an alternative reality which was, in fact, a dream of an iconic scene from the movie version of The Night Watch. Which in itself shows you just how different these books are from the so-called adaptations of them... the sequence never even took place in the original novel.

Due to the prominence now of books and especially mainstream movies dealing with magical themes, I think it’s far to say that The New Watch has an abundance of appropriate and not quite irritating postmodernistic references to literary phenomenon like the Harry Potter and Lord Of The Rings series. There’s even a really nice reference to Boris and Arkady Strugatsky’s seminal sci-fi novel Roadside Picnic, which was itself made into a masterpiece of cinema by director Andrei Tarkovsky under the title Stalker. On the whole though this doesn’t go too far and doesn’t slow things down too much and the writer certainly appropriates his references with care, usually to either illustrate a plot point or to give you insight into a character or group of characters. So this really didn’t bother me.

One thing I will say is, after a pitched battle sequence concluding the first of the three interconnecting stories which make up this latest volume, there’s a lot less action in the book and more of Lukyanenko’s, almost trademark, philosophical discussion... which is okay. This is what good speculative science fiction does best and here he uses the metaphor of both the light and dark magicians possibly feeling they are superior to human beings as a comparison to the way the upper class treat the lower classes in Russia (and the world). Which is pretty good and though it might be considered that this slows the action down a little in some places... it’s also really compelling and the book never once gets boring and, if you’re anything like me, you’ll be speeding through it at a very fast rate.

Once again, the stakes are very high in this one and the very future of both humankind and the twilight is in balance. A sense of danger and the realisation that nothing is going to be resolved without some kind of major sacrifice permeates the second half of the novel, as more revelations of a creature dubbed “The Tiger”, which is created by the very twilight itself, are revealed... and once again the weight of the world rests on the shoulders and actions of just one man... Anton Goredetsky.

If you’re a fan of the previous novels in the series then you are going to love how this one turns out (especially since there’s at least one loose thread deliberately left dangling which cries out for another sequel) and you should grab a copy as soon as you can. On the other hand, if you’ve not read any of these, then don’t start with this one. Like all the best fiction containing running characters, the characters grow and mature as the novels continue and you will want to watch them grow as you read... so read them in the order highlighted above if you’re a stranger to the series. Either way, whichever one of these books you make a bee line for, you’re bound to have a good time. Another masterful entry into one of the best series of contemporary fantasy novels. You won’t be disappointed.