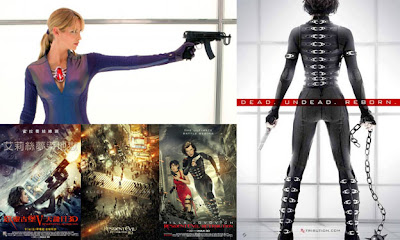 Vile Bodies Of Evil In War

So here we are again. This is the fifth movie in what I think I’m right in saying is the most popular and lucrative series of films to be based on a computer game series ever. On the other hand, the original games are so overloaded with cultural references to various horror movie classics over the years, the most obvious being the large influence of George A. Romero’s zombie movies, that it’s sometimes hard to realise where the line between the two formats and their various homages blur, in actual fact.

What I am certain of, is that this film, while not as good as a lot of the others, is still a solid and respectable entry into the series. It’s walks a very risky tightrope between trying to correct things and undo things which have been added to as elements as the series has progressed, while at the same time driving those knitted together components to give the series new directions in which to continue. That it manages to do this actually quite well, while still managing to pack the flick with what is extensively wall to wall action, is somewhat good news.

The trailers for this promised the return of many characters who had died in previous episodes of the film series, which I’ve reviewed here (1, 2 & 3) and here (4). Although I had some idea in the back of my mind how this could work, the explanations for the reemergence of characters (played by Michelle Rodriguez, Colin Salmon, Sienna Guillory and Oded Fehr etc) who were sliced, diced, defected to the umbrella corporation or exploded, and so forth, in the previous movies... was actually better handled than I expected. It was good to see these faces again and, for anyone else who thinks they’ve figured out what the deal was here, all I’m going to confirm is, yes, these actors do have multiple roles in this installment.

We also get answers, of a sort, or a least a little more elaboration, of the non-sequitur of the giant sized hammer dude from the last movie and also this film goes some way to give more context to the brilliant “Tokyo in the rain” opening credits sequence of Resident Evil: Afterlife 3D. Interestingly, the sequence in this film where this opening was addressed has the added musical attraction of using the same composers' music for that sequence, layered in over the top of this one. The music in this one by Tomandandy (literally, a two man team of composers called, um, Tom and Andy) is quite serviceable, although I didn’t enjoy it as much as I did their last one. But congratulations to them because I think I’m right in saying that this is the first Resident Evil movie to retain a composer over from the previous film. So while this movie, as all of the sequels, feels like a reinvention of the last, it has the musical glue to keep continuity with the last one more, finally, and that’s helpful because this one starts off exactly where the cliffhanger ending from the last one left us.

Talking of which, the credits on this one are quite nice and also fairly arrogant in that they show a slowed down action sequence which runs backwards (in excellent 3D for a change, just like the last one) until it gets back to where we left it... we then have Mila Jovovich’s Alice character (yeah, this one continues with the slight allusions to Alice In Wonderland in it, with the Red Queen once again popping up as the computerised villain of the piece) recapping the previous installments... like she always does. We then catch back up to the last film again and see the action sequence ran back at full speed this time, but going forwards to propel us into the rest of the movie proper... it lasts maybe less than a minute this time, though.

The performances are all good again, (especially Michelle Rodriguez in the non-villainess version of her, um, character) and the action sequences all excellent and, it has to be said, unrelenting... although I did find some of the passages in the movie a little light on emotional context and thus a bit dull. This film also undoes, right at the end when they’re setting up the sixth film in the series, my main concern about the last one... by reintroducing the “T-virus” back into Alice’s system and returning her “super powers” to her... although one of Michelle Rodriguez’s characters also has those super powers, so she will obviously be back as a villain at some point, I suspect.

For a movie which reunites so many cast members, it seems unusual that Ali Larter was not in this one properly. I can’t quite remember, but I’m pretty sure she didn’t die at the end of the last one, did she? The absence of this character is conveniently circumvented right at the start when Alice is literally blown out of the action on the ship from the last movie and thus we don’t know the final fate of her companions. I’m pretty sure they will bring Larter back when they do the next one though... at least I hope they do.

Another and, frankly, much bigger loss to the series is that there’s no “Alice Versus Zombie Dogs” fight in this one. This is the first Resident Evil not to have a little scene where Alice fights off zombie dogs... and that kind of disappointed me to be honest. Their inclusion in the last three were so obviously forced in their because the fans love them... so it’s a shame they’re absent here.

And that’s pretty much all I have to say about this one. If you’ve not seen the last one, even though this does have a handy recap, you’ll probably be lost in it and even if you aren’t, you won’t have any emotional set up to the characters. If, on the other hand, you’re already a fan of the series in general... well it’s not as good as some of them but, even so, it doesn’t let the side down and serves as a good set up, I assume, to whatever the next part of the arc is... which seems to look like it’ going to include some kind of war with flying dragonish looking things (I don’t think they were zombie Pterodactyls anyway... hard to tell). So, no worries if you’re into the Resident Evil movies already... this one’s still a hefty installment. You can watch without peril.