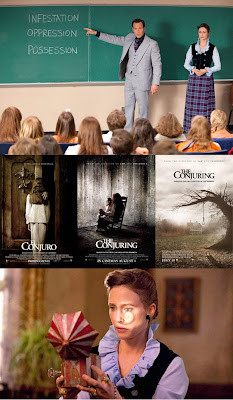 You know, back in the 1970s and 1980s, I used to claim that there were only, maybe, between five and ten decent horror movies ever made. Now, what I meant by that is actually, between five and ten “scary” horror movies ever made. Clearly, for example, The Bride Of Frankenstein is probably going to be on most people’s top ten horror movies but it’s probably not in any way an effective horror movie in terms of scaring anyone... unless that person is two or three years old maybe. So for when I was making that claim... I stick to my guns. There are lots of great horror films, such as Suspiria, Zombie Flesh Eaters, Night Of The Living Dead etc... but none of these movies are in any way scary.

Nowadays, however, I’d have to say my opinion has been forced to change given the influx of really well made horror films coming out in the last ten to fifteen years. Loads of films where the creeping and subtle terror, has started to make a come back in a more than competent manner. We have films that get the job done right, now, like The Exorcism Of Emily Rose, The Last Exorcism (reviewed here), Paranormal Activity 2 (reviewed here) and Paranormal Activity 3 (reviewed here) and, you know, The Blair Witch Project. Even just the last couple of years there’s been a steady increase of freshly made horrors which actually don’t fail to scare and I can probably add a lot to the likes of my original list from way back when... which included stuff like The Haunting (1963 version), The Fog (1980 version), The Shining and, tentatively, The Exorcist (The Version We’ve Already Seen). I think it’s fair to say that during the last decade or two, my list has probably doubled.

The reason I’m dredging up this stuff now is actually by way of an apology. You see, The Conjuring is actually something of a great and powerfully scary movie. That being said, though, I’ve reviewed a fair few effectively scary new movies over the past three years and so, if what I say here about this movie sounds like something of a bit of a repeat review of any of the other of the better horror movies I’ve reviewed on this blog, well I apologise.

Of course, that makes this review no less valid and the movie in question no less great.

The films is a dramatisation of the real life events of a demonic possession which plagued the Perron family back in the early seventies and the people who helped them, the real life husband and wife team of psychic investigators Ed and Lorraine Warren (portrayed brilliantly in this movie by Patrick Wilson and Vera Farmiga) who, among others, investigated one case which is known to modern cinema audiences as The Amityville Horror. It’s also a very effective “scare the pants off you” movie which is not to be missed by fans of the supernatural and the unknown.

Three things distinguish this movie a little more than a lot of the other horror movies doing the rounds the past few years... the first being, of course, that we have a real life couple of protagonists who have investigated hundreds of cases which could be prepped for a sequel if this movie is successful (they are and it is, by the way... I’m expecting to see another one in a couple of years and I look forward to it greatly). So genre characters who can keep on running in a number of movies, thus filling a void left when the two movies made as extensions of the TV show The X Files turned out to be... well... a bit lame.

Another thing which make this a little different is that it’s set in a period around about 1971 (until 1973 in real life, is my understanding of events) and although there are a lot of accidental anachronisms on show for the time portrayed here, the movie generally manages to capture the spirit of this period without resorting to too much postmodernistic nostalgia... it’s not a movie about the past, in other words, it is just set in the past and this is not a ‘feature’ of the story... it is just another fact.

The other element which sets it apart is its confidence in breaking the narrative flow to put in little diversions and emphasise points with a bit of visual punctuation, so to speak, not unlike a 1960s Godard movie... although with a completely different motive. It’s also to the credit of the director in question that this never really breaks the spell of the film... merely serves to enhance little points at key moments. Also, it’s not done all over the place either. It’s a tool which is used on the odd occasion and which doesn’t outstay its welcome.

A couple of “mini past cases” from  The Warrens are highlighted, for example, one of which... involving the much loved horror film staple of “a creepy doll”... is even used to clarify certain events pertaining to the case The Warrens are working on in the main timeline of the movie in no uncertain terms (you’ll know it when you see it... Ed and Lorraine Warren are not the only people besides their assistants and The Perron Family who are placed in demonic peril... but I really don’t want to spoil it for you so I’ll say nothing of this here).

And now we come to the stuff which is possibly going to sound a bit like one or two of my other reviews... but I write this because it’s the truth. The film-makers obviously know horror movies inside out and, though I had my reservations about the last 20 minutes or so of this director’s Insidious (which turned me off that whole movie, to a certain extent), this guy certainly knows how to run almost every horror cliché in the book throughout the film’s, never overlong, running time and still get away with it. That is to say, he has honed his feel for horror cinema to the point where, even though you are expecting quite a lot of what goes down in some of the key scare sequences, they are always so beautifully and effectively executed that you really can’t find fault with them. Indeed, you don’t have time to find fault because the sequences in question, coming ready or not, will make you jump out of your skin at some points. So if you are already a jumpy person... consider yourself warned.

Also, the director is not one of these people who is inclined to keep the camera moving all over the place at high speed to make it look like it’s moving along at breakneck place but, that being said, he does tend to have a very slow shifting field of vision which gives the feeling of static master shots when, in fact, they didn’t seem to be. Very slow takes and edits seems to be the order of the day here (thank goodness) and the slight sense of motion inherent in every 24 frames of film is really hypnotic and helps to draw you into that all important atmosphere of terror the crew is trying hard to create here.

And it works really well. Right down to Joseph Bishara’s original score which really supports the film well and which I have to wait a month to arrive on CD because, for some reason I can’t fathom, it’s only available from US Amazon and not the UK Amazon. Go figure. So I can’t tell you as yet what it’s like as a stand alone listen but it’s really effective in the movie and I’m sure it will scare me loads when I finally get around to listening to it. Certainly goes for a mood of terror and unease and gets it right all the way.

The one thing this movie really has going for it though, right throughout the entire movie, is that all the human characters (and by that I mean, people who aren’t dead and are ghostly or demonic spirits) are completely likeable characters who you really wouldn’t mind hanging around with at a pub and who really promote a certain, solid set of loving family values. And of course, this makes the spiritual and deadly attacks on them even more frightening. You care about all of these characters... so you’re invested in them right from the outset.

And of course, the actors portraying all of these people are just great in their roles. There’s honestly not a bad turn among them. These are skilled craftsmen and craftswomen who, along with the rest of the crew, have come together to make a horror movie which will literally, for want of a more eloquent term, “scare you up good”. And it’s to their credit that, in The Conjuring, they do just that. If you call yourself a fan of horror cinema then, although it might all seem a little overfamiliar perhaps, you really ought to go and see this movie and have some kind of opinion of it... good or bad. I had a lot of fun with this one... and so did the packed out audience I saw it with, if the jumps and screams are anything to go by.