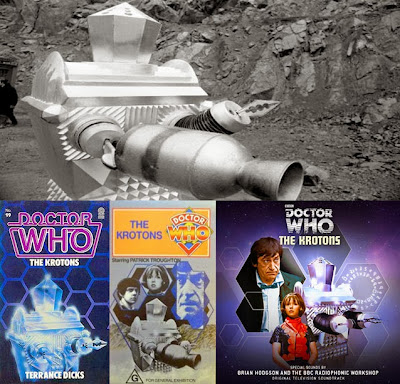 I remember exactly when I first saw The Krotons on television... and it was a really big deal.

My earliest, haziest recollections of Doctor Who as a two year old were of the Autons smashing their way out of shop windows in the Jon Pertwee classic Spearhead From Space (reviewed here) and Jon Pertwee was the Doctor I grew up with... along with, um, Tom Baker and Peter Davison. However, I was aware of all of the Doctors at the time from various publications... the 1973 10 year Radio Times anniversary magazine, The Doctor Who Book Of Monsters and, of course, the numerous Target novelisations of the stories which I started reading when I was fairly young. And my favourite of these last were always the ones with Patrick Troughton’s incarnation of The Doctor in them.

Flash forward a little to November 1981. We were already past the great purge of the BBC's stupid destruction of what was then the majority of their Doctor Who back catalogue and, as a result, they only had the one Patrick Troughton story left in their vaults at the time (a few more have thankfully resurfaced over the years but the majority of them are still lost). The story was The Krotons but, since they rarely showed repeats of Doctor Who related stories on television at the time, barring the odd rerun of The Brain Of Morbius or The Deadly Assassin, it seemed unlikely that I would ever see a Hartnell or Troughton story in my lifetime (or so I thought then and, in the days before commercial video recorders, this was actually a very reasonable conclusion to reach).

Then something wonderful happened. To bridge a gap between series 18 and 19 of the show, the BBC ran a series of repeats, screening old stories in the winter of 1981, before Davison’s first full series as The Doctor. The stories they ran, shown as part of a season called The Five Faces Of Doctor Who, were Hartnell’s first story An Unearthly Child, Troughton’s The Krotons, Pertwee’s The Carnival Of Monsters, Hartnell,Troughton and Pertwee’s The Three Doctors and Baker’s recent swan song, Logopolis.

And so I had occasion to finally see  Troughton in action in, not only a Troughton era story, which had started its original first episode broadcast right towards the end of the first year of my own birth, but also a Pertwee era story which I didn’t really remember from the first time it played back in 1972. And they were great. I really loved Troughton in the role of The Doctor and from pretty much that point in my life he became my favourite actor in the role. Still is to this day.

The Krotons may not have been the one the BBC would have shown if they’d have had any kind of choice in terms of repeating from Troughton’s back catalogue, but it was certainly a good one, depicting the somewhat clichéd Doctor Who story chestnut, the ignorant enslaved by the technologically advanced.

In the case of The Krotons, The Doctor, Jamie and Zoe accidentally stumble on a race of primitive humanoids called The Gonds who are educated by The Kroton’s machines throughout their lives. The brightest and best are picked each year to be “companions” of the unseen Krotons and disappear into the Kroton’s machine, never to be seen again. The Doctor and his companions already know why they’ve not been seen again.. because they are disintegrated by the Krotons as, it turns out, The Krotons convert smart brain energy into something they can use to finally ‘take off’ after centuries in their broken spaceship... the repairs to which are conveniently just reaching completion. It’s up to The Doctor, Jamie and Zoe to rally the Gonds against the Krotons and also defeat the superior new faction of Gonds who want to attack the Krotons straight away with no chance of winning. It’s all pretty standard stuff for a Doctor Who story but, since it is a 1960s Doctor Who story, that means it’s still pretty good at what it does where many other shows or movies might fail.

The camerawork is kinda cool and there are some interesting POV shots from the ‘camera-as-Kroton’ vision with some establishing shots, too, which border on the surreal and maintain interest without worrying about not filling the soundtrack with the constant drone of dialogue, like most shows these days try to do.

The score, such as it is, is interesting too. It’s just been released on CD earlier this year by Silva Screen but it’s not a traditional score rooted, or indeed anywhere near, melody. Instead it’s a load of electronic sounds and atmospheres which allowed the BBC Radiophonic Workshop a chance to show off its technical brilliance and imbibe the story with sound tonalities to create the tension and atmosphere required when the villains are, indeed, a robot/crystalline species themselves.

The acting and scripting are all pretty much pitch perfect and you do care about the various characters and the antics they get up to on screen, although some of the cliffhangers are not exactly as worrying as you might want, to be sure. The personalities of both The Doctor and his companions come to the fore, re-enforcing the character types and flitting between the comedy that the Troughton era was best known for and the sense of imminent danger that has always been a big part of the show.

The DVD print fares pretty well for a Troughton era story, not that surprising since they’ve had the original of this one for a while, and the transfer seems as good as you could expect from the BBC at this stage of their admirable contribution to the home video format. Certainly an entertaining time for Troughton fans and, if you’ve never seen a 'Second Doctor' story before, this one would make a great jumping on point, seeing as how the character dynamics are all well on show and it’s all wrapped up in a charmingly entertaining story. Definitely one to watch.