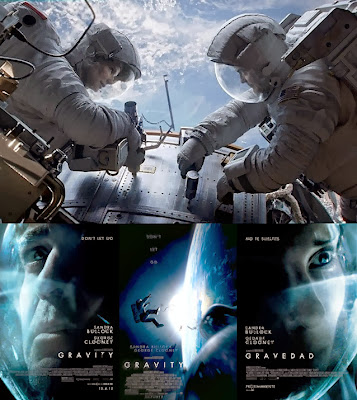 Warning: This will have some big spoilers weighing down the end of the review but I need to talk about certain things leading to the conclusion of the movie so... you have been warned.

About halfway through the movie Gravity, I realised that, in a way, I was watching an old Laurel and Hardy comedy short... but I’m getting ahead of myself again. I’ll circle back to that in a while.

Gravity is the new film by Mexican director Alfonso Cuarón, who also directed another science-fiction film I liked called Children Of Men. It’s spectacular and spellbinding and, for sure, all the good things you’ve probably already heard about it. Not only that, it’s technically a great achievement when you look at what you’re presented with in terms of what’s actually up there on the screen as opposed to how much of that could have been achieved in real life instead of being done on a computer. The performances of the actors, of course, are real life but, well, I don’t think I’d be wrong in saying that, with the amount of CGI in this movie, it's essentially one big animated movie. In fact, there’s actually a scene a little way in which features another character from the same studio, Warner Brothers... that of Marvin The Martian, from various of their Looney Toons cartoons. A nice nod from the director, perhaps, in acknowledgement of the nature of the beast he’s created for us to watch here.

Marvin The Martian isn’t the only cinematic reference here either. There’s a shock moment involving a dead body that has the same visceral impact as a very similar scene in a moment in Jaws, this one coming fairly early on in the film with a floating body in a space ship. And another nice touch is a scene where Sandra Bullock, as the film's lead protagonist, is stripping out of the first of a few spacesuits she has to wear throughout the movie in zero gravity. I’m pretty sure that Cuaron and the rest of the crew must have at least been thinking about the opening sequence of Roger Vadim’s Barbarella when they filmed this, even if it wasn’t a direct homage to that movie (which, incidentally, I believe it was, it’s quite similar).

All in all, I have to say that I was surprisingly impressed with the film, both by the aforementioned CGI which I didn’t really find myself thinking about as much as I thought I was going to, and by the script, score and performances. But there was one thing I did find myself a little irritated by and that brings me back to my opening remarks.

Back when the BBC used to regularly show Laurel And Hardy comedy shorts on television in this country (alas, those days are long gone and future generations are suffering from the lack of these in their lives) there was often a moment when something would be wrecked with good old Ollie left in the ruins. Then stray bricks would start raining down on his head and Stan and Ollie’s facial expressions would do what they did best, make you laugh from even the thinnest of material. Then the bricks would slowly start falling again. Then they’d stop for a bit. Then another would fall, just to add insult to injury to Ollie’s predicament and fuel to your laughter. Then another one would fall and, eventually, you were always on the edge of your seat just waiting for that last brick to fall.

Cuarón’s Gravity is much the same. It’s not the one trick “something bad happened and now we have to solve that one problem and get back to Earth” pony that I'd expected it to be. In fact, the script is rather clever in managing to have an ongoing problem that constantly... um... cycles back to be a new threat again at regular intervals. And there are other problems our heroes have to face throughout the movie which occur as a “for want of a nail” cascade effect and the smallest of consequences of fall-out from that... and this is where I got just a little irritated at times.

On the edge of my seat, yes, but... well... I was always waiting for that one, last brick to fall. So to speak.

So much so that, in the final sequence when a door is opened and water comes flooding into a space capsule, threatening one of the characters with drowning, I was really finding myself thinking of Jaws again and waiting for the director to “send in the shark”. Possibly complete with an underwater zombie in tow like in Zombie Flesh Eaters but, well... my point is that by the time I’d seen the main protagonist survive so many “piled on” perils in one short movie... I was kinda expecting the absurd at this juncture.

Now then, that spoiler warning is going to drift into full effect right now so, if you don’t want to know stuff, stop reading now.

The film is essentially a two hander between Sandra Bullock and George Clooney but... not for long. Once Clooney’s seasoned astronaut character has done his bit to set Bullock onto a trajectory of survival, he cuts himself loose to save her and drifts back off into space to slowly die. However, there’s been reports that a lot of people have been complaining about the last twenty minutes or so and I’m guessing that it’s the scene where Clooney comes back into the narrative, ghost-like, to a dying Sandra Bullock and tells her how to survive the next bit of her journey back towards Earth that is giving some audience members problems. Some will see this sequence as a supernatural or even religious experience but... it really doesn’t have to be, if you don’t want it to be. Sandra’s character is already drifting out of consciousness by this point and she’s very much in a dream state, near death. Lots of people, myself included, can solve problems in their sleep with solutions which they just wouldn’t have thought of in a conscious state. So there’s the scientific grounding behind that scene if you are so inclined.

Personally, I think that the director, who is also one of the writers, is smarter than that and is fully aware that he’s given us a little scene which will happily fulfil both viewpoints. These narrative ambiguities are the stuff that stories are made of.

Also, there’s a nice scene I have to mention where the heroine is crying and we see a couple of her tears floating around the inside of a spaceship. Don’t think I’d seen that before, that I can remember, and it’s always the mark of a good director if he can show you something on film that you’ve never seen before. Usually it’s these simple ideas, overlooked by most and drifting into the subconscious, which are the most powerful cinematic moments and give the movies some heart. Think of the scene with the vibrating water in the glass in The Unbearable Lightness Of Being (parodied quite brilliantly again by Spielberg with tyrannosaur footprints made visible in Jurassic Park) or the scene in The Lost World: Jurassic Park 2 where the glass windscreen is slowly cracking under some of the main characters. This stuff is what really lingers in the 24 frames per second, beating heart of cinema... when the jumbled up heads of most of the the audience have forgotten them. This is what art is best at and it’s why Cuarón, in many ways, is very much a great artist.

Whether you agree with that statement, of course, is not important. What is important is that we have here a film that is unbelievably spectacular, quite suspenseful (you’ll be holding your breath like you do in a submarine movie) and, above all, an entertaining night out at the cinema. And seriously don’t wait for DVD or Blu Ray for this one. If you can see it on the big screen then it’s the kind of film you should make that trip for. The 3D is pretty good on this one too and greatly benefits the movie. Gravity has the gravitas of serious drama, the Newtonian weight of great art and the spectacle of popcorn sensibility entertainment... and that’s a good combination for cinema at its best.