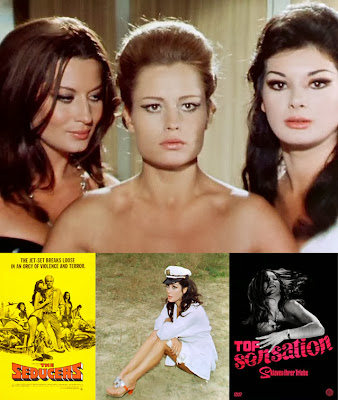 When I went to the Westminster Film Fair to pick up a copy of The Devil’s Wedding Night just recently, I shelled out the extra (for me, a bargain hunter to put it in the politest terms) cash for a limited edition DVD of Top Sensation by a German company who specialise in restorations of what they phrase Italian Genre Cinema... translation: Italian Exploitation Movies. They’ve done some pretty good giallo restorations in the past and I have a few of their movies sitting on my shelves.

I’d never actually heard of this movie before but the guy on the stall was talking to me and one of the other customers and they both recommended this film to me which was, apparently, a hot item of which he’d already sold most of his allocated limited edition stock of the title. I wasn’t sure until I picked it up but then I saw that it had my favourite “giallo babe” Edwige Fenech in it, in a definite state of undress, on the back cover. Not being one to shirk my responsibilites to my favourite female artists, especially if they are not wearing any clothing, I decided to make the transaction and, as I was forking over the hard earned cash, the stall holder furnished me with the wisdom that, I wouldn’t regret this purchase... especially the bit with the goat.

I thought no more of this, thinking perhaps that I had misheard the gentleman and wandered over to my favourite Westminster stall, with the two guys who specialise in Italian soundtracks. I mentioned that I’d just bought a film which I’d never heard of before with Edwige Fenech in it and when I told them the title they both commended me on having made an excellent purchase. Apparently I had a fine, upstanding genre movie in my hands. However, the two stallholders in question then looked at each other and added... “especially the goat scene”. I was kinda worried now but no amount of, well, whatever it is I could imagine with a goat taking place, could keep me from watching another movie with Edwige Fenech in her prime.

And so we come to Top Sensation.

It may be a genre movie, for sure... but if it is, I’m not entirely sure what genre to put it in. It’s certainly an interesting movie but what’s really interesting about it is what was added into it for various different cuts of international releases. Fortunately, I’m able to see just what the extent of those are because this lovingly restored, albeit full frame (I’m assuming it’s open matte from a respectable company like this?) transfer by a company who I would have to call the German Criterion Collection of Italian trash cinema, is a two disc edition and includes all the alternate and freshly created (for the German  market, I’ll get to that later) footage on the disc.

But the basic cinematic release of the film is what I’ll tell you about first (the Italian TV cut is slightly different but, again, I’ll get to that in a minute). It’s all about seven people and, unlike the German version, only seven people. There are two principle locations... an Island (which is in a couple of scenes) and a boat. The plot invovles the super rich mother of a mentally retarded young man, Tony, and her employees who are hired to help Tony start to develop his mind. The plan is that Ulla, the Edwige Fenech character, will have sex with Tony so he’ll grow up fast. Instead, most of the time the one remaining bloke and three women seem to all be having sex together. Then they run aground on an island for a bit and Tony finds a goat sheperdess that he likes and she and her vengeful husband find themselves on the yacht as they sail off into trouble. There is some death and there are some very slight softcore sex scenes and lots of arguing and shouting... and that’s about it. It is, however, nice to look at and with people like Fenech and Rosalba Neri in the movie, I can’t say I regret buying this one at all. Even if it does have a scene on the island where, indeed, Ms. Fenech accidentally finds herself the (implied by the edit) object of affections of a goat. So those folks at the Film Fair weren’t kidding. About the goat. Kidding... about the goat. Um... yeah.

Anyway... the film ends with the machinations of the three people who are trying to win their fortune from Tony’s mother, foiled by a deed which, by the end of the film, only the audience knows about. The ship sails on into an uncertain future. At least in the Italian cinematic version.

In the TV version some extra resonance is added by use of flashbacks throughout the last couple of shots for the people who want the added depth or justification of why Tony has done what he has done (and I’m not telling you exactly what he has done because there’s not much I can give you in the way of spoilers for a movie like this but this would definitely constitute one). The resonance of the simplicity of the ending on the first version is a little spoiled and overworked for the Italian TV version, though.

The US version is surprisingly raunchier, with added footage to extend the relativley minor scenes of lesbianism, a lesbian threesome and, yes indeed, of the curious and inquisitive nature of the goat. I say surprising because the way the censors usually work in America is that they usually let all the violence through but cut out anything to do with sexuality... not that that makes a lick of sense mind you but that’s what they tend to do. Presumably the American’s would prefer their youngsters to see scenes of blood and carnage to emulate rather than teach them how to love and respect a woman. I really don’t understand this kind of censorship but, refreshingly, the trend is reversed here, from what I can see of the extended scenes from the American cut.

And then we come to the extra footage shot a year later for the German version...

Wow! Loads of new characters and nudity and death aplently as two 1970s police detectives, who are so sexist they make Regan from The Sweeney and Gene Hunt from Life On Mars and Ashes To Ashes look like poster boys for feminism, link a series of murders to the people in the yacht. How on earth, I thought as I watched these scenes, are they going to have these two bring the alleged killers to justice since they obviously haven’t got any actors from the original shoot to help them out in that respect. Easy and quite hilariously unconvincingly, as it turns out. As the two investigate the island, they see the boat (off screen) and we then cut to a shot retracked in from earlier in the film where Tony drops a stick of dynamite. Rather than the dynamite being picked up and thrown in the sea like earlier, the detectives then hear an explosion as the ship is presumably destroyed, The two detectives look at each other and say “Let’s go home.”

Blimey. It didn’t take much for a German copper to solve a case in those days, did it?

Anyway, the discs have a few extra features, no expense spared by the always excellent Camera Obscura, and even an audio commentary on the disc... none of which I’ve watched yet. I prefer to review films like this without knowing anyone else’s responses. Would I recommend this movie to other people. Well, it’s kinda interesting and has the same kind of leisurely atmosphere as, say, Mario Bava’s Five Dolls For An August Moon (which also had Edwige Fenech in it, sans goat) but it’s certainly not the great movie that Bava’s masterpiece was. All in all I’d say that only fans of the naked bodies of Edwige Fenech and Rosalba Neri really need apply themselves to seeking out this movie. If, on the other hand, you are already a fan of the film, then this German edition from Camera Obscura is definitely the one to get as I doubt you’ll find a better version around at the time of writing this review. And if you do, say hi to the goat for me.
Posted by NUTS4R2 at 16:39