Doctor Who - Warriors Of The Deep 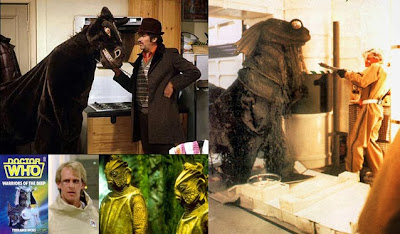 I really liked Peter Davison, even before he took on the role of the fifth TV incarnation of The Doctor.

I was very much a Jon Pertwee/Tom Baker Doctor Who fan at the time but I’d been familiar with Davison for a while by then, playing the role of Tristran on the James Herriot TV show All Creatures Great And Small, and I was pretty sure he’d make a great version of the role. Which he certainly did, making the pain of the departure of Tom Baker’s domination of the role quite surprisingly palatable at the time. However, after a brilliant first season for Davison, followed by a not quite as good but okay second season, things got very bright and then very dark for Doctor Who.

The Brightness? Well, of course, that was the November 23rd 1983 broadcast of the shows 20th Anniversary story The Five Doctors. That was truly a good time for all the fans and it brought many good things to the table, including Jon Pertwee’s first (and last) encounter with the cybermen... at the time he was the only one of the five incarnations who had never shared a story with them.

The darkness? Well, I’m not too sure exactly when the rot began to set in but I can tell you that it could perhaps be seen very clearly by taking a look at this truly terrible production. This was supposed to be a special story but politics got in the way and due to Maggie Thatcher’s announcement of a parliamentary election, the show's usually stupidly inadequate deadlines were even further compressed without much warning, due to studio time needed for coverage of that (or some such thing). And the horrible results are here for all to see.

Now, you have to put yourself in the head of the 16 year old teenage version of myself, who was geared up to watch this show. This was the first story of the new season, coming about six weeks after the stupendous The Five Doctors. Also, this story saw the return of, not one, but two foes from The Doctors past. It was only the second appearance of both The Silurians and The Sea Devils and neither of them had been seen after their initial appearances against Jon Pertwee more than 20 years before (read my reviews of both by clicking on the highlighted titles). I still remembered The Sea Devils scaring the life out of me when I was a kid, so this was something I was really looking forward to. Plus, I think this was the first time two villains had been teamed up in the show at the same time, barring that anniversary special which, to be fair, had all the villains working separately. If memory serves me correctly, this wouldn’t happen again until the cybermen and daleks fought each other in the David Tennant era... so this was all good stuff. And much looked forward to.

So imagine my disappointment. You had a brilliant cast including such alumni as Ian McCulloch (see my review of his film Zombie Flesh Eaters here) and Ingrid Pitt (see my review of her movies The Vampire Lovers here  and Countess Dracula here). You also had Mark Strickson as Turlough (who we all hated but that’s okay, I think we were supposed to and certainly it’s a sign of his skill as an actor that we all did) and Janet Fielding, continuing her role as Tegan (who I was besotted by at the time, obviously). And along with Peter Davison as The Doctor, who was always nothing less than excellent in the role, you had an almost perfect recipe for some fine British television.

But it was terrible, it has to be said.

The script has some nice moments but there are also some horrible continuity problems with it, partially because of the monsters the show chose to use, and I really just can’t fathom why, to be honest. The main problem, of course, is that the Silurians (who are nothing of the sort in terms of pre-historical terminology, by the way) and their marine cousins the Sea Devils, were both referring to themselves by those very names when, in fact, this was a name invented by the human race for them and which these two races couldn’t possibly know about unless they’d happened to read something like that handy reference guide, The Doctor Who Monster Book (which presumably the writer had, at least). Even worse than this are things like Peter Davison having a conversation about what to do about the Sea Devils when his character hasn’t in any way been exposed to them in the story for him to know about their reappearance yet. It’s all pretty dire, to be honest.

But not as dire as the “not-so-special” effects and the costumes, to be sure.

The original Sea Devils wore string vests. When they come out of hybernation here they are apparently now wearing warriors armour, presumably to disguise the fact that only their heads have been manufactured. They now look less than frightening and more, I dunno, bewildered or startled than anything else. Certainly not the underwater menace they were back in Pertwee’s era. The Silurians aren’t quite so bad, it has to be said, although the design is a little more stylised and... well... a little more rubbish (but, to be fair, not as bad as the silurian designs introduced in the Steven Moffat era of the show). Both Silurians and Sea Devils alike still suffer from the classic “bob the head around a bit when you are speaking” syndrome too... since their faces are completely immobile and therefore an indication is needed for the viewer to be able to tell which of them is talking at any one time.

Both of these monstrosities, however, pale before the unbelievable rubbishness of the Myrka, a big sea monster that invades the underwater base which The Doctor and his companions find themselves on. Seriously, it looks like a big pantomime horse. It really is that bad a costume with one guy in the front and one in the back. I was going to say it reminds one of the comical pantomime horse which was a regular of that children’s television classic Rentaghost at the time but, when I watched a short documentary on the making of this show, it turned out that it actually was indeed the same two “motion actors” who played the pantomime horse in Rentaghost after all. Wow. Mind blown. The Myrka was truly a let down and, next to this thing which really did look like a pantomime horse and, for all intents and purposes, actually was one, the Sea Devils and Silurians maybe came off looking better than they actually were. But when the Myrka bashed a wobbly polystyrene... um... sorry, steel door which pinned down Tegan, there’s no way you can actually feel that The Doctor and Tegan are in any way in danger, I’m afraid.

So yeah, there’s a definite lack of peril in this episode, and that’s a shame because some aspects of the script, including the very last shot and line, which Davison delivers with far more gravitas than can be expected from a man who’s recently battled a pantomime horse and lived, are actually quite meaty. However, the “in no way special” effects and the lack of decent costumes, direction and editing really let this show down and this definitely contributed to me losing interest in the show to the point where I stopped watching for a bit at some point soon after.

Looking at the documentary on the DVD, I don’t feel too guilty about trashing this one, I have to say. Everybody else seems to be laughing about how bad it was on there too, including the main actors and the special effects department. This was far from Doctor Who’s finest hour and whenever I give the newest incarnation of the show a bad time, I might be well to remember just how bad the show got before its resurrection back in the Russell T. Davies era. Recommended only for people who want to see the Silurians and Sea Devils again. Generally though, best to steer clear of this one.