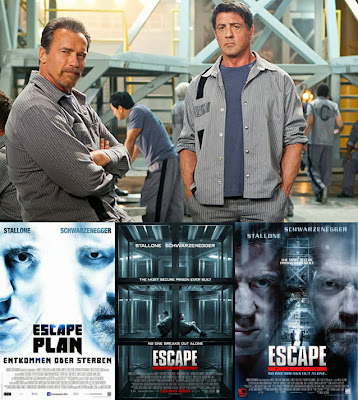 It’s an old but not overly used premise these days. A man who makes his living by breaking out of prison and thus exposing the security flaws of said prison to the government. Silvester Stallone plays lead character, Ray Breslin, with a certain charm and determination that only he might bring to the role. The plot is very simple... Ray Breslin takes on a job from a private firm to take on a new, "inescapable" prison and, once the job starts, all his safety nets to keep him from staying incarcerated if anything goes wrong are immediately and deliberately taken away from him and he realises that somebody wanted to put him in prison for good and bury him there.

At a point which felt a little bit like rushed scripting at first but, in light of other things which happen later on was actually quite dead on, he is immediately befriended by another prisoner who the chief warder, played by Jim Caviezel, has to obtain certain sensitive information from. The over-friendly prisoner is called Emil Rottmayer and he’s played by the other legendary action actor in this movie, Arnold Schwarzenegger.

Now this, of course, is a fanboy’s dream team up and, although I found the film to be quite flawed in one way, it has to be noted that one of the very big strengths of the script of this movie, which really is quite a likeable one, is that this film in no way feels like it is a bunch of Hollywood suits trying to think up an overblown vehicle to handle the juxtaposition of these two giant personalities that are Stallone and Schwarzenneger. What it feels like is a movie trying to tell a decent story with some nice action sequences in it which just happens to have these stars in it, doing really well with their roles, too, as it happens. I’ve always had a lot of time for both these actors, even if they don’t always pick the kind of movies I’d want to watch, and I can confirm that the on screen chemistry between the two is absolutely dynamite here. They really work well together. In fact, the acting and storyline really aren’t a problem here.

However, there is a problem.

With a script and talent like this in front of and behind the camera, this should have been a great movie and, while it is immensely entertaining, on the whole, I did find myself distracted by the pedestrian way in which the movie was shot and edited. It felt a little like watching an early 80s soap opera from television in the way it was put together, I felt. Now I don’t know if this was the fault of the director or whether it was the producers rushing him through and him not getting enough master shots, but the whole thing seemed to me to be, closeup/cut to reverse/cut back to reverse of that... and etc. Don’t get me wrong, I thought it was very easy to watch  and that’s always a good thing but, frankly, I felt underwhelmed with the way most sequences of shots were designed and edited together for pretty much the whole movie. I wanted something a little more well oiled and slickly designed for this kind of movie but it did seem to be fairly standard in terms of cinematography, edited and direction to me.

That being said, what the movie did do, which is fairly rare for me with modern movies as regular readers of my reviews will be able to attest to, is surprise me a few times. When I thought I had all the answers to two particular aspects of the story, I was pretty much left without a clue. And that is just so rare for films these days. Now, to be fair to myself, it might be because I wasn’t listening properly to the sub-plot of the movie involving one of the characters but, at the end of the movie especially, they did manage to take me by surprise and I do appreciate that. To paraphrase Stallone in the movie, "I never saw that one coming."

The music is kinda interesting too because it’s mostly buried in the mix during the action sequences apart from the percussion and, it has to be said, when the percussion part of the score by Alex Heffes (who scored the director’s previous movie The Rite, reviewed here) started up, I actually mistook it for machine gun fire when I couldn’t see it and it popped me right out of the movie because I was waiting to hear if the sudden burst repeated itself rhythmically, which it then did. I think, for me, I could have done with the score being dialled up a bit so the music was a little more obvious and there were less sound effects, but I know some audiences like their crash, bang and wallop so I won’t press the point. I think it might be an interesting stand alone listen, although I can only find it available at present as a digital download and, frankly, no CD equals no sale, thanks very much music companies.

All in all, despite my problems with it, I did find myself having an entertaining night out at the movies and if you like the two principal actors involved, you will probably find yourself having a good time with it. Definitely a pop corn and beers kind of movie, if you’re into that kind o’ thing.